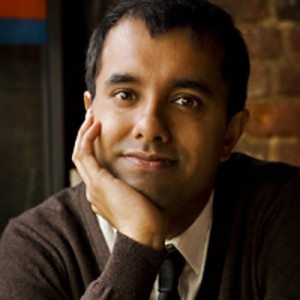 What is a “normal child,” anyway? Rakesh Satyal’s debut novel Blue Boy (Kensington) compels his audience to search for the answer. Not since the landmark 1997 Belgian film Ma Vie En Rose has there been a story that examines this question with such humor, sincerity, grace, and genuine beauty. In it, his loveable main character, Kiran Sharma, struggles with his identity and sexual confusion while living simultaneously within American and Indian cultures in 1980s suburban Cincinnati, Ohio.

Satyal recently chatted with ChicagoPride.com about his poignant new work.

PJ: Blue Boy reminds readers of the subtle complexities of gender identity in children. Do you think parents today are any more enlightened about this than when you were a child?

RS: I do think that parents are generally more informed about the mere presence of gender issues and the topic of homosexuality itself, and I think that there is more of a conversation among parents who may not know a great deal about these issues than there was in the past. This is largely due to the inherent nature of media these days to expose subcultures and communities at an exponential rate. At the same time, gender and homosexuality are such multifaceted entities that I think that parents still have to go on their own, very personal journeys. There is some comfort in being part of a community of parents who have gender-questioning or gay children, but I think that it is important for parents to realize that their circumstances and the circumstances of their children are unique and worthy of particular, tailored examination.

PJ: What would you say to a parent who confesses that they are worried their boy likes to play with a doll like Strawberry Shortcake?

RS: It is very much an issue of communication. Parents cannot know to what end their children are behaving in such a manner unless they make a concerted effort to find out what the imagination and creative inclinations of their children are like, truly. Since different children experience the process of sexual evolution differently, it is important for parents to be considerate of their child’s very particular, and often isolated, situation. That said, they should also know that they are not alone, that questions of sexual identity and sexual expression have existed as long as families have been in existence, and with the public awareness of gay and gender issues expanding every day, there is a universality to the experience that can be comforting and eventually constructive. Also, don’t knock playing with Strawberry Shortcake’s accessories till you’ve tried it.

PJ: How much of your novel is autobiographical?

RS: Much of Kiran’s spirit and the tone of his delivery come from me, to be sure. And there is a pair of stories – namely, the Sebastian and Abe Lincoln stories – that more or less happened to me during my childhood. But the novel is much more imagined than people will likely think. Most important, the parents, though they share some idiosyncrasies in common with my mother and father, are quite different from them. This is because my parents were somewhat more progressive than typical Indian parents, and I wanted to make sure that Kiran’s experience was happening under circumstances that were true to the larger Indian community while still making it clear that he is very much their son and the product of that family unit. Also, I have two amazing brothers who have been a huge part of my life, so Kiran’s isolation sets him apart in a very specific way.

PJ: What aspect of your personality made you standout most as a child?

RS: Certainly, my creativity. I was always, always doing something artistic, whether it was creating dollhouses out of Kleenex boxes or baking Linzer cookies or cross-stitching or singing along to cassette tapes. (No, there is no way that I could have been any more flamboyant.) I definitely made this Kiran’s defining characteristic, and it’s because I think that a majority of gay kids take solace in their own imaginations and their own creativity. I think that we build our refuges by way of our imaginations, since we imagine circumstances that transcend what can be a very difficult life, especially during the much-critiqued time of childhood. And so a healthy sense of creativity can be the most effective route to confidence.

PJ: In the book, your main character, Kiran, experiences the heartache of self-shame for the first time in his life. Do you recall your first experience?

RS: I had gay feelings from a very, very early age, and I remember telling a classmate in first grade that I thought he was cute. He was instantly repulsed and never let me forget that sense of rejection, and so I always knew that not only was I different but that I would have to recalibrate my conduct if I didn’t want to be criticized in a similar way again. Yet there had never been a doubt in my mind that what I wanted was to be intimate with him, and so, in a certain way, that experience bolstered me because it defined for me what my inclinations were. And although the process of covering up that part of myself was hard and could be damaging, I think that years later, when I became accepting of my gayness, I could see an early acknowledgment of it that gave me a sense of purpose, however subconsciously.

PJ: Kiran also comes to the conclusion that being gay is a “self-contained, alternative world.” With the continuation of the mainstreaming of the LGBT community in today’s popular culture, do you think that today’s new generation of gay adolescents feel the same way?

RS: I think that there is still an initial sense of isolation about being gay, a tendency to think that one’s situation is different from other people’s, that people may not understand your circumstances. But you are correct that the dialogue about being LGBT has been opened up more and that communication, especially online, has introduced people up to each other in a way that was not available before, at least not readily. I do think that it is important, however, for people to realize that the process of coming out has no heterosexual equivalent. The hardship and self-doubt and worry of the coming out process are singularly LGBT. This is not to say that there is not something beautiful about it – it can be incredibly beautiful – nor do I mean that straight people are incapable of empathy. Far from it! But one of the LGBT community’s strongest binds will always be that there is a shared sense of survival, of coming to terms with oneself and standing stronger.

PJ: Where do you think your character Kiran is now?

RS: This is a great question, mainly because the answer is that I intentionally kept this ambiguous! I wanted it to seem like Kiran could become a feisty drag queen or a man of letters or a ballet dancer or a painter or an activist or a host of other things. One thing I can assure you he is not, though, is an engineer!