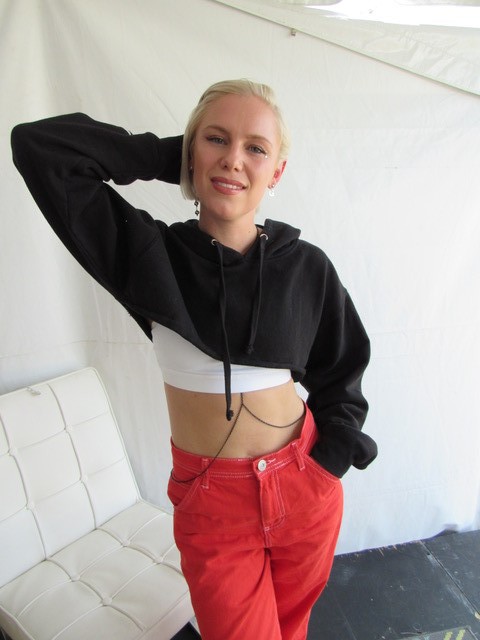 Straight from Wauwatosa, Wisconsin, singer Grace Weber grew up in a musical family. She began singing gospel in churches then was ready atet age of 16 to perform on TV for Showtime at the Apollo. Weber was one of the finalists on Oprah’s Karaoke Challenge and in 2010 was a Spotlight Artist to Watch on Billboard.

Her first album Hope & Heart spawned the single “Leave the Light On” and her second The Refinery released the single “Perfect Stranger” among others.

This artist continues to grow and was a hit at Lollapalooza this past summer. Her new single with Vic Mensa called "Mercy" is already on the rise.

JN: (Jerry Nunn) So you are from the Midwest?

GW: (Grace Weber) Yes, just a few hours away. It feels good to be in Chicago.

JN: You grew up around music?

GW: Yes, My grandpa had 10 kids so I had that many aunts and uncles. All of them were required to learn an instrument growing up. It was kind of like the von Trapp family band except they were in Wisconsin!

So they family sang and played instruments around Christmas and Thanksgiving. I was aways around music. I sang in a gospel choir in Milwaukee. That is where I found my musical roots and my place as a singer. Music has always felt like love and family.

GW: I play a little piano and guitar, but I mainly focus on the vocals and the writing.

GW: It comes in waves. Sometimes I feel so in my zone and I’ve got this then other times I get a rush of nerves. It will feel like the first time again. It depends on where we are at in the touring cycle. If we have done a million shows then it is easier.

I got to perform with Chance the Rapper in South America and the last show in San Paulo I walked out on stage and there were about 150,000 people there. I remember feeling on that stage that I had hit my 10,000 hour mark and was grounded. That was a moment for me, for sure.

JN: Talk about your Oprah moment.

GW: That was crazy. Oprah had this show called Oprah’s Karaoke Challenge on her last season. She told people to upload a video of themselves singing to her website. I had never done American Idol, but my friends encouraged me to do it. I uploaded a video singing “Natural Woman.” It was the Aretha Franklin version.

A week later I was surprised by an Oprah Winfrey camera crew with BeBe Winans who was singing to me. It was very surreal and bizarre. A week later I was flown to Chicago. I sang for Oprah and she said my name in the Oprah voice, “Graaace!” It was amazing and crazy.

I don’t know if I was ready for that stage but it opened so many doors.

JN: Talk about your new music.

GW: I have a new album coming out produced by The Social Experiment, so Nico Segal, Nate Fox and Peter Cottontale. They are all Chicago folks and work with Chance the Rapper.

I am so proud of it. It was a serendipitous meeting the guys because when I heard their music I wanted to work with them. I felt the music was timeless and classic, but also like the future.

I tried to find if anyone knew them so sent out some messages. I put it out to the universe and let it float.

A friend of mine invited me to a studio with some producers, but didn’t say who. They had heard my voice. They pulled up a track and I sang in the booth. I felt so connected, but still didn’t realize who they were. They told me they go by The Social Experiment. I told them I had been trying to meet them. We made music with a very organic process without knowing each other.

JN: Sometimes it is just meant to be. Your life sounds like it has followed a divine path.

GW: Life always teaches me patience. So far everything has happened how it was supposed to. I have to keep reminding myself to keep taking those steps forward. I don’t try to rush the process.

GW: Yes. It is in Milwaukee and for high school students. It is a once a month event during the school year. It is free. We bring in mentors to work with the kids. We want to notice a kid for who authentically they are and celebrate that.

JN: Have you noticed any LGBT fans?

GW: Yes, for sure. The thing I love about my crowds is they are super diverse. I look out at the audience and think how cool that is. It is a sea of people who love music no matter age, race or gender.

JN: You have a mix of Robyn and Pink with your look today.