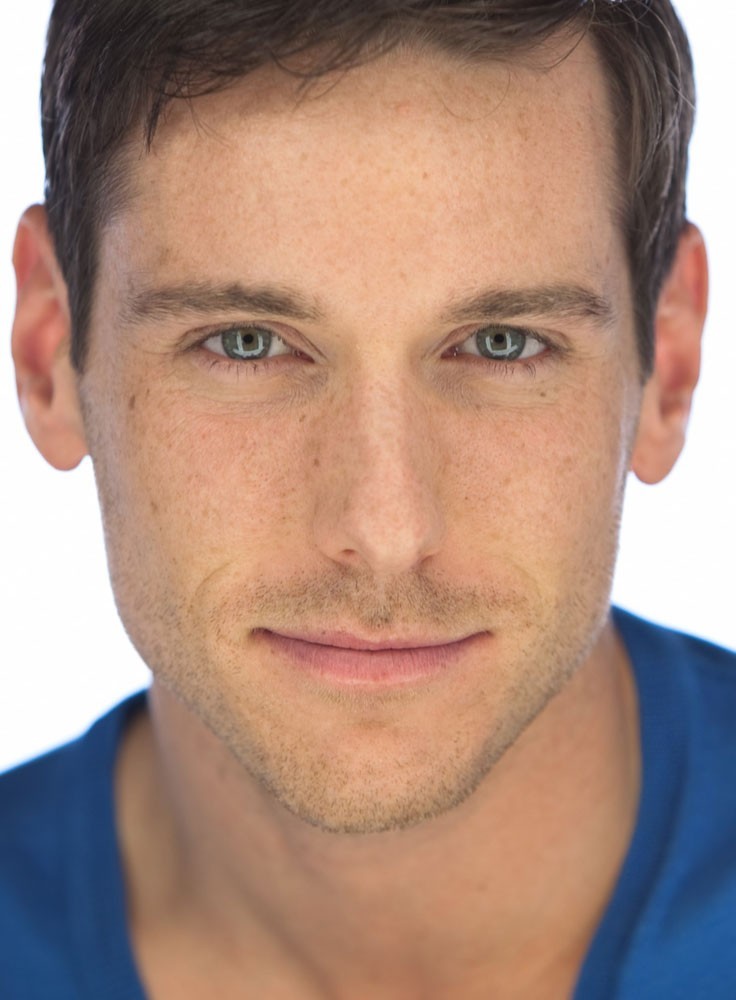 MI: (Matt Inawat)  Hi Ian!  Congratulations on the success of the musical tour and thanks for taking the time out to chat. Let's start by talking about what drew you to the production and journey to being part of Hello Dolly.

IL: (Ian Liberto) I have always been more at home in older musicals. So anytime a revival rolls around, I always set my eyes on it. And I had previously worked with the choreographer before. He was the director and choreographer of a show I did in New York called Chaplain, The Musical.

I had never worked with the music director before, so I made sure that I was on the top of my game throughout auditions. It was a really intense process, but definitely worth it. I came out on the other side with the job, and my relationship with the choreographer seems stronger now after this process.

MI:  In Hello Dolly, you are the dance captain, a swing, and an understudy in the production. How many parts do you have to know in this production? And how long did it take you to master all of those roles?

IL: Well it is still a work in progress. In the New York company I covered 15 ensemblements plus Cornelius. The tour cast was slightly smaller, so I have 13 plus Cornelius, but I've also added Rudolph, the head waiter, on the tour as well.

MI: Take us back a little bit. How did you get involved in dancing and acting; was there a mentor that inspired you the most?

IL: When I was in high school, there was always something that I did extracurricularly. It wasn't something that was a driving force in my life. I was on the swim team, and I played an instrument, and that took up the majority of my focus. But I always was cast in the dancing roles in the musicals, just because I happened to be good at it. Then, every Christmas, my family would drive downtown to see a musical, a touring musical production, and sophomore or junior year I think the musical that we saw that year was Chicago.

IL: There's something about that musical in particular that really spoke to me. I don't know if it was the darkness of it, or the sleek black costumes and the style of Bob Fosse choreography. Something about it sort of got under my skin a little bit. And so, from there I kind of started researching what other work Bob Fosse had choreographed. And I became sort of enamored with his movies, and I would go into the library and check out movies like Sweet Charity and Damn Yankees. That's when I sort of fell into it a little bit.

The Illinois theater program has this all-state theater festival that happens every year. Students from across the state audition to be in the statewide production, and my senior year was West Side Story. The choreographer of the production happened to be the ballet instructor at Millikin University, and through her I fell into the Millikin crowd. And the rest is sort of history.

MI:  What role would you say was your first grand role or performance?

IL: Well, being a dancer first, I don't play that many roles. My very first professional production ever, I played Will Parker in Oklahoma. And it was maybe a little more than I could chew at the time, and looking back I would love to play Will Parker again now, knowing what I know now.

But I'd say Bob Mills III [in "Chorus Line"] was probably my first real meaty role that I got to tackle, and I got to do it on tour. I did it in Chicago at The Oriental Theater. Just recently I revisited the role at The Hollywood Bowl with Mario Lopez over the summer, musical season. He has a 10 minute monologue in act one, and getting to do that for 6,000 people was pretty cool.

MI:  Have you had any funny or memorable moments on stage?

IL: Funny? Funny things happen all the time. It's the scary things that I think stand out the most. My first Broadway show I did was a show called Promises, Promises with Sean Hayes and Kristin Chenoweth. It was a really dynamic experience for me, as far as learning about the business. It was my first Broadway show. It was my first time I had ever been a replacement in an ongoing show. And it was the first time I had ever sung before.

So I was on for a character who does a lot of lifting of other ladies in the opening number, and I had practiced so much before the show started that when the show started I was so sweaty that I lifted one girl and my hands separated because they were so sweaty. She did sort of land on her head. Granted she didn't fall very far, but still, it became an issue.

Things like that sort of happen all the time, but it was the first time anything like that had ever happened to me. I sort of carry it with me wherever I go, just sort of hoping that that would never happen again. Knowing the responsibility of being a partner is something that stood out to me at the time.

MI:  Did Sean and Kristin impart any wisdom or advice?

IL: They're both goofballs. You know what, they were so good at it, and this is true when you think of Saturday Night Live, and you think of sitcoms, and you think of the importance of breaking when you're doing a comedic scene and playing the audience's reaction.

There were certain things that happened on accident. Like Kristin, the button of her coat would get stuck in his guitar string or something. And the audience sort of laughed at them, and they started laughing for, like, five minutes. And every night, from that moment on, Kristin tried to get her button stuck in the guitar string, because she knew it would create such a laugh in the audience.

An audience always feels like they're having a once in a lifetime moment, and it's all comedy. There's something so brilliant about finding those moments

Sean, specifically, was so good at really listening to the pulse of the audience and playing into that. He was such a comedic genius. I learned so much from him.

MI:  It's great to learn from the best, right?

Since you grew up just North of Chicago, I take it you're really familiar with the city. Especially since you've been seeing Chicago plays growing up. So, I have a few city questions for you. The first one is probably gonna be the toughest question.

MI:  Not at all! Ok. Here's the first one: Chicago Cubs or Chicago White Sox fan?

IL: Probably Gospel Brunch. That's such a suburban thing to say, isn't it?

MI:  No way, it's a pretty awesome experience. House of Blues on a Sunday morning! How about your favorite place for Chicago Pizza?

MI:  See, you passed the quiz!
So while on tour, what are three things you always need to have with you?

IL: I need to have my knives, because I cook a lot and I need to have sharp knives when I'm in the kitchen. So I travel with knives and other cooking utensils in my trunk. They're my grandma's knives, that I got when she died.

And Pedialyte - lots of late nights.

MI:  How do you like to spend your days off?

IL: I usually, sleep in, go to the gym, go to the grocery store, and make some sort of big meal that I can keep for the week. I'm not that adventurous when it comes to being on the road. I've been on tour, this is my seventh tour. And I feel like I've done a lot of the touristy things in a lot of the cities I go to, and so these days I try to just pretend like I live in the city that I'm in.

MI:  Ian, you're openly gay. How does being gay and having the support of the LGBT community affected your career and personal goals?

IL: It's really interesting. It's just no questions asked, sort of. I never have ever once felt out of place. It's such a deep community, the Broadway community, the inclusion and understanding runs so deep. I really feel like I got very lucky choosing to go into this business, because I felt very comfortable and loved along the way. I never once felt threatened or out of place.

MI:  We talked about advice that Sean and Kristin imparted; so what advice would you offer up to aspiring new LGBT youth interested in the theater?

MI:  On the flip side, what's been the most rewarding side of being in the theater?

IL: On a side note, I've been with my husband for almost ten years now-

IL: And I never would've met him, obviously, if I hadn't been in theater. Also, professionally speaking, I always tell people, when I talk with college students, or give masterclasses, I say, "Don't be mean. Be a nice person. Everyone wants to work with a nice person. A lot of opportunities come your way, that don't result from directly auditioning for something. They result from someone going through their mental Rolodex of people who they've worked for before, and they enjoyed, and they give job opportunities."

There are a lot of Tony Awards I've performed on, and I've performed at the Kennedy Center Honors a few times. And those opportunities would not have come my way if I had been difficult, or, to put it bluntly, an asshole.

MI:  Yeah. That's a really good piece of advice for any business, especially this one.

MI: So is there a dream role in any play or musical that you'd love to portray, whether it's dance or acting?
IL: When I was in college, it was in an actual theater, but I call it more of a backyard theater production, that my friends and I put on ourselves, of Cabaret. And I was the MC, and I would really love to play the MC in a professional production of Cabaret somewhere.

MI:  Sum up your theatrical life in one music title.

IL: God, my entire life in the theater in one musical title... "Dancing Man"

MI:  Are there any charities or causes that are personally important to you, that you'd like readers to know about?

IL: My husband wrote a book. And we give half of the proceeds go to the lymphoma cancer research to honor my father who died of Non-Hodgkin's lymphoma.

MI:  What's the title of the book?

IL: Small Talk. It's on Amazon.

MI:  Thanks, we'll provide the link to purchase the book here.

Ian, thanks for taking the time to chat!

MI:  Well, I do hope you get some time to enjoy the city again while you're in town. I'm looking forward to watching you and the cast perform on opening night.

Tony Award-winning Broadway legend Betty Buckley stars in HELLO, DOLLY! – the universally acclaimed smash that NPR calls "the best show of the year!" and the Los Angeles Times says "distills the mood-elevating properties of the American musical at its giddy best."