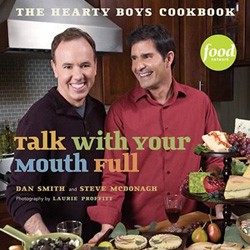 Native New Yorkers, Dan Smith and Steve McDonagh (aka The Hearty Boys) have proudly made Chicago their home base for many years with tremendous success. Before winning their chance the host their own television show, Party Line, on Food Network, they were already well-established local caterers and Halsted Street restaurateurs. Their fast-paced lives has recently become even fuller with the release of their first cookbook, Talk With Your Mouth Full (Stewart, Tabori & Chang), the opening of a unique, first-of-its-kind food demo/party studio in Chicago called HBTV, and even new parenthood. Whew.

Smith and McDonagh took a few moments during their recent whirlwind book tour to sit down and discuss all of this with ChicagoPride.com.

PJ: Anyone who has watched Food Network’s The Next Food Network Star knows how intense the competition and stress can be. What has compared to that in your lives since winning that competition?

HB: (Steve) Good question. The stress had only just begun during the competition. We won FNS on June 26, 2005 (Pride Day) and our son was born 2 weeks later on July 9. Needless to say, it was a very full summer.

HB: (Dan) Keeping up with everything that we have going on now – from the catering business to HBTV to television to cookbooks – can sometimes be daunting!

PJ: Congratulations on fatherhood! Now that you are parents, what kind of correlations do you see between parenting and catering?

HB: (Steve) Well, the biggest difference is that our clients actually eat more than plain pasta and a bowl of ketchup. We don’t know what kind of karma we’re working through to have a child who hates food, but...

(Dan) Seriously though, parties and parenting go a lot smoother if you have a game plan. Now that’s not to say that something might not go haywire (like Nate putting his ketchup-y hands all over my party shirt right before I walk out the door); but if there’s a plan in place, you can negotiate all the little obstacles and arrive at your desired goal—be it a fantastic dessert to finish a meal or a college education for Nate!

HB: (Steve) Putting too great an expectation on the evening. You may have all the best intentions with a tight schedule for your event, but once you get people there, the food and drinks are flowing and a party takes on a life of its own. You need to get out of its way sometimes and let the flow of the event happen naturally.

PJ: So true. That’s great advice. By the way, congratulations on the release of Talk With Your Mouth Full. What do you like most about your new book?

HB: (Steve) It feels like us. It was a challenge to make sure the reader could differentiate between “our voices” and that seemed to work really well.

But overall, the irreverent tone of the book, the accessibility of the stories and recipes came across in a way that we’re proud of.

PJ: What do you want readers to come away with from reading it?

HB: (Dan) A new found confidence in their entertaining abilities – it doesn’t have to be overwhelming! Just follow some of our recipes, tips and timelines and the party will be a breeze.

PJ: From my hosting or party-going experiences, I have found that people either love or loathe theme parties. What makes a good theme party versus a bad one?

HB: (Steve) Talk With Your Mouth Full is filled with real-life party tips: think “How much ice do I need versus how do I macramé a napkin ring out of goat fur?” Here’s my take on theme parties right from the book:

In order for a theme party to be truly unforgettable you’ve got to use your imagination! A “beach” theme where the guys wear Hawaiian shirts and everyone gets plastic leis just doesn’t cut it. It’s the same party you went to last week, except now the girls are wearing flip-flops. You need to think of ways to cause a stir and create conversation.

Some of my favorite theme parties have included a 1980s fundraiser where everyone had to wear their prom dresses and pastel tuxes, an Oscar party where guests came as a character from one of the nominated movies (we did this in 2002 and recreated the cocktail party menu that Julianne Moore used in “Far From Heaven”), and a grown-up scavenger hunt where guests split into groups and drove all around town causing mayhem and talking their way into obtaining items.

The party really soared when all the groups returned for cocktails and war stories.

Of course, you should always match your menu to the event. For a Kentucky Derby Party we had a client who went above and beyond when she contacted Kentucky’s governor to ask what he traditionally served at his own derby celebration. We recreated his menu in miniature and passed mini Hot Brown sandwiches and mint juleps to guests who wore fabulous hats and seersucker suits. There may even have been a little wagering, but if you talk to the governor . . . you didn’t hear that from me.

PJ: Let’s talk about HBTV. What do you hope to achieve with the concept and the facility?

HB: (Steve) Food TV in general really fascinates the public right now. The most fun part of our demos and live classes is when we pull back the curtain and give folks a glimpse into what food television is all about. HBTV is about giving everyone a taste of what it’s like to cook on TV…and to show them it isn’t as easy as they think. It’s also a fantastic way for us to actually meet our fans and spend time with them; quality time where we watch them crash and burn while drinking cocktails and mocking them.