There is a healing power to music. 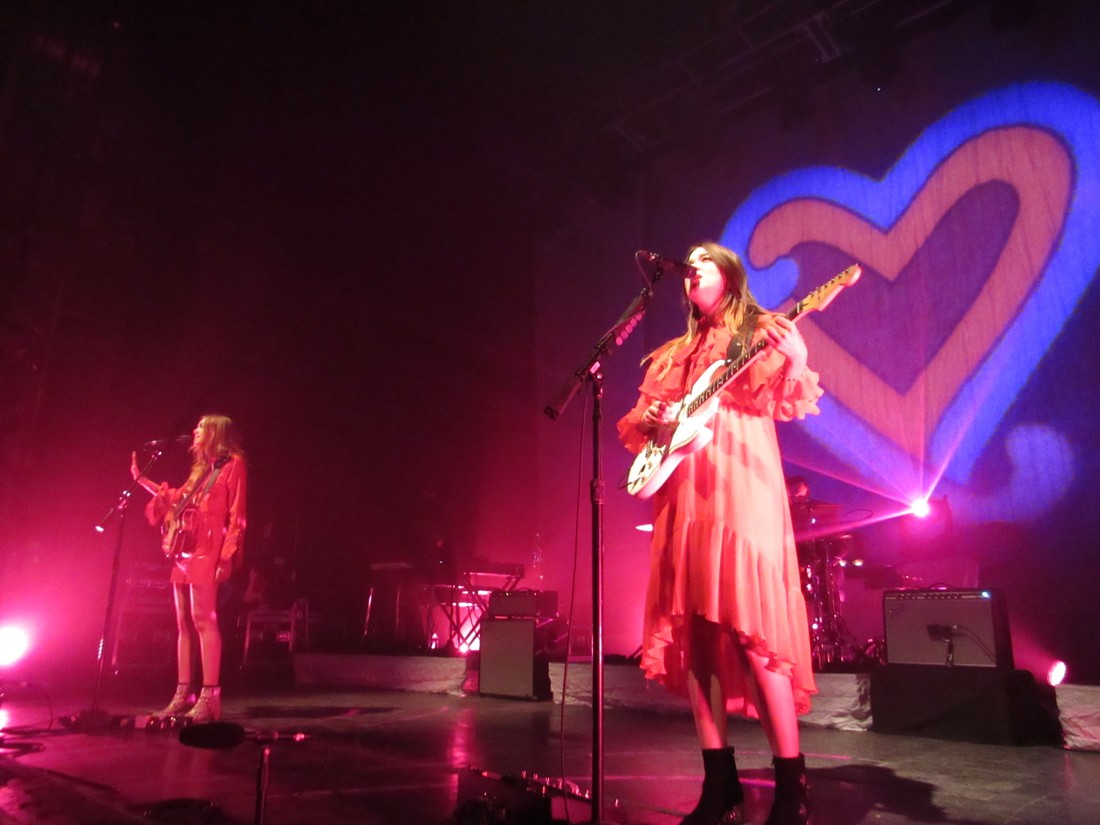 Swedish folk duo First Aid Kit are two sisters Klara Söderberg and Johanna Söderberg who dance to the beat of their own drum. They have released four albums and the world has taken notice. They were nominated for a Brit Award as one of the five best international groupsmin 2015.

Their latest record Ruins brought them to Chicago for a sold out show at the Riviera Theatre recently and they chatted backstage before the show.

JN: (Jerry Nunn) You grew up in a musical household with your dad being a musician?

KS: (Klara Söderberg) Yes. Our dad was in a band before we were born. He was a teacher when we were growing up, but we knew he had been a musician. There were always guitars around.

KS: We always walked around the house singing and performed when we got the chance. If our parents had people coming over to the house we put on a show. We just wanted to be onstage.

JN: What kind of music did your father listen to?

KS: His band was inspired by the punk, new wave movement in New York such as Television, Patti Smith, and Talking Heads.

KS: It was a big moment for our family.

JS: Our mom was freaking out.

JS: Our mom is a film teacher so we watched movies all the time. We loved musicals. We liked Singin’ in the Rain and The Wizard of Oz.

JN: So you liked old school musicals. What do you think of the new ones?

KS: They are a little too polished for me. La La Land for example could have been great.

JN: I knew you were cool with gay people if you liked Judy! [all laugh] Sweden is very liberal with gay rights?

JS: Things can always get better.

KS: In certain aspects we are doing better.

JS: Coming here I am always a little shocked. There are so many things that I take for granted when it comes to gay rights, feminism, or racism. It is not perfect in Sweden, but I feel we have come a long way.

JN: Do you feel the United States is behind?

KS: Well, we also feel you are ahead of us sometimes. It’s both just depending on what it is.

JN: With traveling around you must see all different things.

JN: What are music influences? I hear some Patsy Cline at times…

JS: We found country ourselves online. Our parents didn’t like country. They thought it was soft music. Their parents listened to Simon & Garfunkel and Leonard Cohen.

KS: When they were growing up in the ‘80s Bob Dylan was in his christian phase. I found Bob Dylan by listening to his earliest records.

They like country music now, but for us it was a way of rebelling back then.

JN: I grew up in Nashville and prefer old school country music.

JS: We just played the Ryman last night. Emmylou Harris was there!

JN: Did Jack White hear you play down there? I know that is where his studio is located.

JS: I am not sure how he heard about us.

KS: It was on our first or second US tour. He called and asked us to come to the studio the next day. Of course we went.

JS: Then we went on tour together. He’s awesome and very supportive of us.

JN: Where did the name First Aid Kit come from?

KS: It is just the idea that we want our music to be some kind of consolation for people. That is what music was for us growing up, and still is. We seek a lot of comfort in music. Just the idea that one person would feel it and feel less lonely.

JS: There is a healing power to music. For us writing is very therapeutic. Performing it every night and seeing people’s reactions and seeing how they interpret the songs is therapeutic as well. It is all a big love fest!

JN: “You Are the Problem Here” seems completely appropriate to what is going on in the world today. Was that in mind when writing the new record?

KS: It was in the air already. That was written after reading about a rape case at Stanford University. It was a big thing in the news and people were upset because the guy only got six months in prison, and he was let out after three. It was also the way this rapist talked about the crime he committed. He didn’t take any responsibility. It was horrifying to read about.

That is why we wrote that song.

JS: Now the movement has exploded.

KS: I hope it lasts. I think we all have to speak up. We are in a powerful position.

JS: We are privileged.

KS: Our crew here are all lovely people, but we can actually say when we are not comfortable. If someone is not in our position and in the bottom, they need to speak up. We want to change things for them.

JN: Is the music written collaboratively?

KS: Yes, but it depends on each song.

JS: I am definitely more melodies and arrangements.

KS: I am more lyrics.

JN: What instruments do you play?

KS: I play electric and acoustic guitar. I sing…

JS: We played it twice.

KS: It is such a huge festival.

JN: You have done Glastonbury?

JS: We have been around. We tour a lot.

JN: What do you do on your downtime?

JN: How many dogs do you have?

KS: We don’t have dogs, but we are professional dog sitters. We are not certified, but there is an app we use.

JN: What is the name of it?

JS: DogBuddy, but that is the Swedish one. We are also obsessed with film. We are working right now on a short film.

JN: What is the subject?

KS: Did you see Call Me by Your Name?

JN: Of course and it was so good!

Has anyone tried to push First Aid Kit into being more commercial?

JS: We have been very determined since we started that this is our own thing. We want full creative control. I think it’s because our mom is a badass feminist and we had that upbringing. We are on a major label and had already finished the record. We are not going to change for anyone. This is what we do and have proven that is successful and people like it.

We are not really worried about that.

KS: I like to think a big part of our appeal is that we do it all ourselves. It is completely from us.

JS: I think we care less about what people think about us now. Before we wanted to be indie and small.

KS: Now I trust our ability and love our music so much that I know it’s going to be fine. If people judge us then it’s their problem. It’s just music.

JN: What do you want people to know about you?

KS: I hope people hear it, see themselves in the songs, and can relate to it in some way. I hope it helps them if they need it. That is all it is about for us and all it has ever been about.

JN: “Fireworks” is my favorite. It has a line about a beach in Chicago. Is that based on truth?

KS: It is about 12th Street Beach next to the planetarium.

JN: You mention Silver Lake Avenue so I wasn’t sure about that.

KS: It is basically memories of moments in time where life felt like there was a straight path. I knew where I was going, then I didn’t. I had one of those moments in Chicago. I was 17 years old and in love. It meant a lot to me being here.

JN: Have you spent a lot of time in Chicago?

KS: Not loads, but we have come here on tour. I had a boyfriend that lived here for awhile.

JN: Do you have a favorite song to play live?

JS: We are having a fun time with a cover song now.

KS: It’s really intense. There are no breaks or space.

JS: Sometimes we need a breather.

KS: It is a workout.

JS: The crowd has been loving it.

KS: You have to give it your all when you play it.

JS: We love playing rock or metal. We did a Black Sabbath cover before. We throw it in there because people don’t expect it.

KS: It is fun for us to do something different.