Tegan and Sara interview with ChicagoPride.com 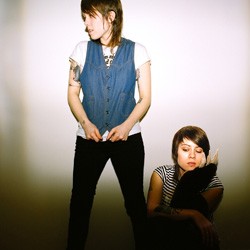 Tegan and Sara seem to know that most of life happens in our heads. Though we all live in the real world, there’s no way we can ever silence the noise, chatter, and obsessions that provide a constant soundtrack to our everyday life.

On their fifth album THE CON, the 26-year old Canadian twins use an intricately varied sonic backdrop (provided by Death Cab for Cutie producer Chris Walla) to express the chaotic thoughts—mostly having to do with the angst of relationships—shooting around their heads. Through music and lyrics, they try to communicate the incommunicable; many of the songs express a desire to penetrate the barriers that our brains put up. “I just want back in your head,” goes the chorus of the first single. “I want to draw you a floorplan of my head and heart,” begins the song “Floorplan.”

Buzzing guitars, plinking pianos, and skittish drum beats—both real and electronic—help to convey the hopes, fears and anxieties that come from trying to connect through love. Though it all might sound a bit dark and heavy, the end result is ear-catching, melodic, and as deeply satisfying as a great therapy session.

Raised in Calagary, Alberta, Tegan and Sara have been making music since forming a “garage duo” when they were fifteen years-old. The pair released their first album Under Feet Like Ours in 1999. Touring relentlessly, gathering fans slowly but surely, they’ve sold almost 200,000 copies of their criticially acclaimed fourth album So Jealous. With a rabid fanbase that helps them sell out almost every show, the Quin sisters can now be considered bona fide rock stars.

Here, while on tour to promote The Con, Tegan takes us on a little tour of what goes on in her head, including her thoughts on songwriting, relationships, and being gay.

CP: As far a songwriting goes, do you and Sara write together or separately?

T: (Tegan) Sara and I have always written separately. As the years have progressed, we’ve started to send each other songs. We might add or change small things in each other’s songs, but we don’t sit in a room and write together.

CP: Several of the songs on The Con deal with the anxiety of being in a relationship — or being out of a one and wanting to get back in.

Communication is also a big theme — you seem to want to urgently communicate the thoughts that are taking place in your head.

T: When I was writing these songs, I was in a long distance relationship. We would talk for hours on the phone and text each other 40 times a day. I was desperate for attention. Giving me hours and hours was still not enough. If she let me go, I would crumple, Ir felt ridiculous. But I couldn’t tell her. When it was over, I felt like I hadn’t communicated my feelings clearly even though I had sent her a song to try and tell her what I was feeling. That need to communicate clearly comes out in my lyrics. Perhaps part of my issue is that Sara and I learned how to communicate with each other before anyone else. We don’t always have to say what we mean. But with others, we do.

CP: You might not want to speak for her, but can you tell me a bit about where Sara is coming from lyrically on this album?

T: I think Sara was really reflecting on the last 10 years of her life. She has a partner from America, and they applied for common law status in Canada so they could live as a married couple there. I think her lyrics express the intensity of that kind of commitment. She’s also been grappling with things like life passing by, the anxiety of death, loss—the kind of things you think about when you wake up in the middle of the night.

CP: Tell me about your songwriting process. I know some people really have to sit down and work hard at it, and others say it’s like channeling music, as if it’s coming through the air.

T: It really does feel as if I’m channeling.

Sometimes when I finish the song, I don’t remember writing it. I know it exists, but I think, “How did you do it?” It’s like a dream—it comes from some kind of unconscious place.

CP: When you make a new album, do you consciously try to make it sound different than the last one?

T: It’s definitely a goal to change and grow, but I don’t think it’s ever a conscious thing. Though, we always want to feel like we’re taking that next step. I don’t want to be making the same music for 20 years, just like I don’t want to wear the same clothes for 20 years. Ultimately, we pick a producer based on what we’re writng, and then everything just falls into place. It’s kind of magical.

CP: Your music isn’t overtly political. I would think some of your fans might expect you to deal with your sexuality in your songs.

CP: So you never had any problems with being gay?

T: Sara and I are both very lucky. We grew up in an alternative household, and our family was very accepting. We were popular, and we both did well in school. We both have strong feelings for women, but we also have strong relationships with men. We both pretty balanced. When Sara started dating a girl at 15, it was definitely a problem for a couple of weeks. But I thought, “I want to do that too.” After that, it was easy for me. I kind of slipped in the back door. It was like, “Look at me, I have a girlfriend too.”

Now that we’re musicians, it’s not like we have to hide our sexuality. But I do feel like I have a specific responsibility to be open and out. If there’s one gay kid who reads about us and gives the article to his mom to show her that being gay can be okay, that would make me very happy.

CP: What do you think about gay marriage being legal in Canada?

T: It’s a real political victory. I’m very proud of Canadians. We’re very progressive on that front. Ultimately, it’s all about commitment, no matter what you call it. You can express commitment by getting married or by buying a couch together. It’s different for everyone.

Win FREE Music: Enter to Win The Con by Tegan and Sara