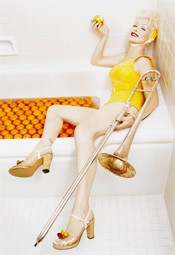 Grammy Award-winning Cyndi Lauper is arguably one of the biggest stars of the early MTV generation. Her unique musical styling and colorful costumes epitomize what we’ve come to know as the Big 80’s. Lauper’s music was as bright as her wardrobe and her debut album; She's So Unusual which included top ten singles "Girls Just Want to Have Fun" and "Time After Time,” sold five million copies.

Over the years, Lauper’s music and message have connected with the gay, lesbian, bisexual, and trans-gender communities. She energized the crowd during last year’s performance during the Gay Games Closing at Chicago’s Wrigley Field.

This summer, the colorful songstress is taking a stand. Lauper will team up with Margaret Cho, Erasure, Debbie Harry, Indigo Girls, Rufus Wainwright, The Dresden Dolls, and a number of other performers for the “True Colors” tour, a 15-city event to support the Human Rights Campaign.

The True Colors Tour kicks off on June 8th at the MGM Grand in Las Vegas, and arrives in the Windy City on Tuesday, June 12th at the Auditorium Theatre.

Cyndi Lauper spent a few moments on her Blackberry during a busy promotional tour to chat with ChicagoPride.com’s Bill Pritchard about her connection to the GLBT community, Chicago’s gay-friendly mayor and the upcoming tour.

CP: We’re excited to see you returning to Chicago for the True Colors Tour. Your performance at the Gay Games closing ceremony at Wrigley Field was spectacular. What was that experience like?

CL: It was an honor for me to be involved. The love and support that I received on the field was truly amazing.

CP: The rainbow flag dress was amazing. What was your inspiration?

CL: There were 2 outfits. I was Lady Liberty and Alison from my band accompanied me on violin was dressed as Abe Lincoln. I had them both specially created for the Games. I was trying to get across that in past years our government stood by people. Abe Lincoln changed history and fought for the freedom of slaves, equality for all. Unfortunately that isn't the case with the current administration.

CP: The crowd at the Gay Games loved your performance and it is without a doubt the LGBT community loves Cyndi Lauper. When did you realize that you had reached gay icon status?

CL: I always had the support of the gay community, my gay family and friends, as Cyndi Lauper the individual before I became famous. I guess I’m just one of those “straight” people that gets it. The commonality of all people is what inspires me. As Cyndi Lauper the artist, I connected because of my music and my visual aesthetic and I guess my “outsider” vibe helped. I was and am still not the run of the mill-straightforward traditional artist and that’s what instantly resonated with the gay community and my songs... that kinda helped too! LOL

CP: At the Games you sang a moving rendition of “True Colors.” Is there a song that’s most personals for you?

CP: Let’s talk about the upcoming “True Colors Tour” What made you want to work with the Human Rights Campaign on this historic tour?

CL: The HRC is an important organization. I have long admired their work. They lobby endlessly working towards change on a national level with key issues concerning the community.

CP: Several conservatives have taken swipes at you and the True Colors Tour.

CL: Swipe away. We will swipe back. It’s a free country and that’s my point for the tour. More people straight and gay need to know what is going on in this country with their civil rights. The focus of the tour is to address the erosion of rights for the GLBT community, but in the larger context it’s about people looking at civil rights. Period. This country has the most diversity on all levels, but the rules are different for certain citizens of our country... it outrages me. I grew up around the women’s movement, the African American civil rights movement and gay rights are no different. It’s just as important for all of us not just the gay people fighting. That’s why I also work with PFLAG. It’s about the families. You gotta start at home. I’m sure some of your readers have had to deal with family that doesn’t accept them. That has to stop! You change attitudes in the home and all of a sudden you have parents fighting for your rights. You have parents who have an understanding of who their kids are versus ignorance and fear.

CP: Absolutely. What is the message you would like to get out to the LGBT Community?

CL: Get informed, get involved and educate others. Stand up for your rights and support those who are trying to support you at a political level... whether that’s on a national level or a local level.

CP: Margaret Cho is another gay icon, what’s it like to work with her?

CL: I have not worked with Margaret before. I have always been a fan though. We did a photo shoot for Entertainment Weekly a few weeks back and it was the first time we ever met. She is really cool, smart and we are going to have a lot of fun on this tour I can tell.

CP: The “True Colors Tour” hits Chicago on June 12th. What are your thoughts about Chicago?

CL: Your mayor gets it! I was blown away by his speech at the opening ceremony at the Games which I saw on TV later in the week. I loved running around Boystown. I had a blast.

CP: Any favorite spots in Boystown?

CL: They had to throw us out of Sidetracks we wouldn’t leave... ha. It was pure mayhem. Those frozen peach drinks were to die for.

CP: I love the purple crush drink! Other than Chicago and Boystown, do you have a favorite getaway?

CL: Anywhere and anytime I can get away with my husband and son. It’s all about family downtime for me.

CP: After the tour, what’s in your plans?

CL: I will finish recording my new album that will be out early 2008 and have tours planned of South & Central America as well as Africa in October & November.

CP: We look forward to seeing you in Chicago for the "True Colors Tour.” Speaking of color, what is your favorite color?

Perfect! The girl who just wanted to have fun shows time after time why she has become our gay icon.

GO VIP: Enter to Win ticket to the True Colors Tour in Chicago, June 12th, at the Auditorium Theatre from ChicagoPride.com and Boystown Live Dance Radio.

The True Colors Tour kicks off on June 8th at the MGM Grand in Las Vegas, and continues throughout Gay and Lesbian Pride month.

Tickets and information about the tour will also be available at http://www.truecolorstour.com