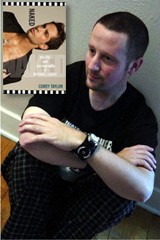 Writings of a Prostitute: Biographer Corey Taylor on Michael Lucas

Recently, Taylor sat down with ChicagoPride.com for an honest discussion about his subject.

PJ: You wrote, "Michael Lucas never has a problem saying what he thinks about anyone he comes into contact with." His natural candor was evident throughout the book. What did he think of you?

CT: [Hearty laugh]. Well, in the beginning, Michael was incredibly supportive of the project and participated fully in a long series of in-depth interviews with me. He gave me unfettered access to his friends, family, and even enemies. I told him from the beginning that the book would portray him positively. I recently read where he stated in response to the biography that it was so flattering that it made the book boring. I had to laugh at that, since most of the book is built upon his words and how he talks about himself. What he didn’t realize he was saying implies that he, himself, is a bore when he talks about himself. This might especially be the case when he falls into talking about himself in the third person. This certainly indicates conceit, of course, but I think it also indicates a detachment or dissociation from his self, possibly connected in some way to his performance of superiority. What he still doesn’t realize is that his life is quite interesting. His perspective growing up as a gay Jew in Communist Russia is truly valuable empirical knowledge. The book is rich with layers of political, cultural, and psychological implications that may not always be stated, but which are shown clearly through Michael’s personality, actions, and circumstances. So what did he think of me? I think, as with anyone, it would depend on what day—or even what moment—you asked him. During the interviews, he could be very cordial and polite (when he was Andrei), or very calculating, short, blatantly conceited, and very much in marketing mode (when he was Michael). After he lost interest in the project, even after he knew it was going to be published, he stopped answering my emails. Eventually, he emailed me and said he heard I got a lot of money from the book, and asked me for money. At the time, I was working full-time, barely making enough money to put gas in my car. And that’s when I stopped answering his emails. If you asked him now what he thinks of me? I’d say he would probably place me somewhere in Omaha, Nebraska.

PJ: Your book explores and promotes Lucas as a true entrepreneur. What do you admire most about him?

CT: The thing I admire most about Michael Lucas is that he is a realistic example of Queer life in America. This may sound shocking, or even askew, but this is how he is human. I am sick to death of this Queer directive that says we have to be portrayed as perfect all the time in order to be taken seriously politically. I think the Queer rights struggle has been seriously harmed by this attitude. It parallels a phenomenon that occurred in literature during the English Renaissance called the querrelles des femmes. Basically, this was a literary quarrel that was conducted with some writers portraying women as wholly negative—horrifying, demonized, and lustful. On the opposite end of the spectrum, there were writers who were portraying women as completely perfect—put on a pedestal, even deified. This was just as harmful because it created an ideal that no real woman could live up to. Eventually, after way too long, some writers emerged who were dedicated to realistic portrayals of women, showing their strengths as well as their flaws. The result of these portrayals is that women could then be seen as individuals, not as stereotypes or ideals. It was then possible to identify with them. The same thing is necessary for Queer portrayals. We need to see that the boy next door, while very likeable, may be a dick to his mother. We need to see the Brian Kinneys of the Queer community who, while very un-likeable, may rise to the occasion when he is needed to save the day. We need to see the pompous, bitchy, self-important porn stars who fight against drugs, and who stand up for Queer rights both with his words and with his wallet. What I admire most about Michael Lucas is that he is just like the rest of us: neither perfect nor incorrigible, just human.

PJ: What prompted your interest in writing this book?

CT: I wanted to write a non-fiction book for a while. I wanted to write about Queer culture, and Queer rights, and I really wanted to begin to explore complicity within the Queer community. I started thinking about how I could present this kind of information, these kinds of ideas, and how I could make them interesting. Then I interviewed Michael for a magazine article, and I had an “a-ha” moment. Immediately I knew that his life would be the perfect example of what I wanted to say. So sometime later, I was talking to his publicist at the time and I said, "You know if Michael ever wanted to do a biography, I would want to write it." And you say things like that and sometimes people respond, but most of the time they are just like, "Yeah, whatever…" But it seemed like his interest was piqued right away because he said, "Oh, really?" He spoke to Michael about it, then I did; and it really took some convincing, but he finally agreed. I guess you could say I needed a hook, and I got a hooker. It also gave me the opportunity, then, to write about the social stigma surrounding pornography and society’s fear of sex and images of sex. The negative issues people have regarding sex and sexuality, I just find so ridiculous. Sex is a big part of life; it’s a basic need that everyone has. I just think that kind of prudishness contributes to people hating their bodies, among other things, and that really pisses me off. The only way to get people used to the idea of sex and sexuality is to talk about it.

CT: That quote introduces the section that talks about the GLAAD incident. It makes me think of complicity and the closet, which is a form of complicity. Basically, complicity is being an accomplice to the forces which oppress you, or that try to oppress you. Examples of this include the Queer directive that implies we all have to be perfect, the idea that Queer people have to be just like straight people, self-deprecating statements like "straight acting" used to describe masculinity as if Queer people are incapable of acting masculine on their own. One of the most significant forms of complicity is the closet, or I should say the self-imposed closet. Heterosexism helps create the closet; but when Queer people perpetuate that by being in the closet, it is a daily act of self-loathing. It’s not productive. Queer people have a hard time understanding that the closet helps homophobia, not homosexuals. That is complicity. If we have to put on straight masks, and straight clothes, and straight acts, in order for people to love us, then they’re not really loving us. It is a lie. Gide’s quote says that so perfectly and so succinctly. Interestingly, what tends to happen is that being true to ourselves and loving ourselves instead of loathing ourselves, actually attracts more love to us. We don’t end up being hated for who we are, and those who hate us for that, don’t matter anyway.