I think that is why we are more used to sexuality, desire, and love. I think the Wachowskis put it in a poetic way. I like the results and I am proud of it. 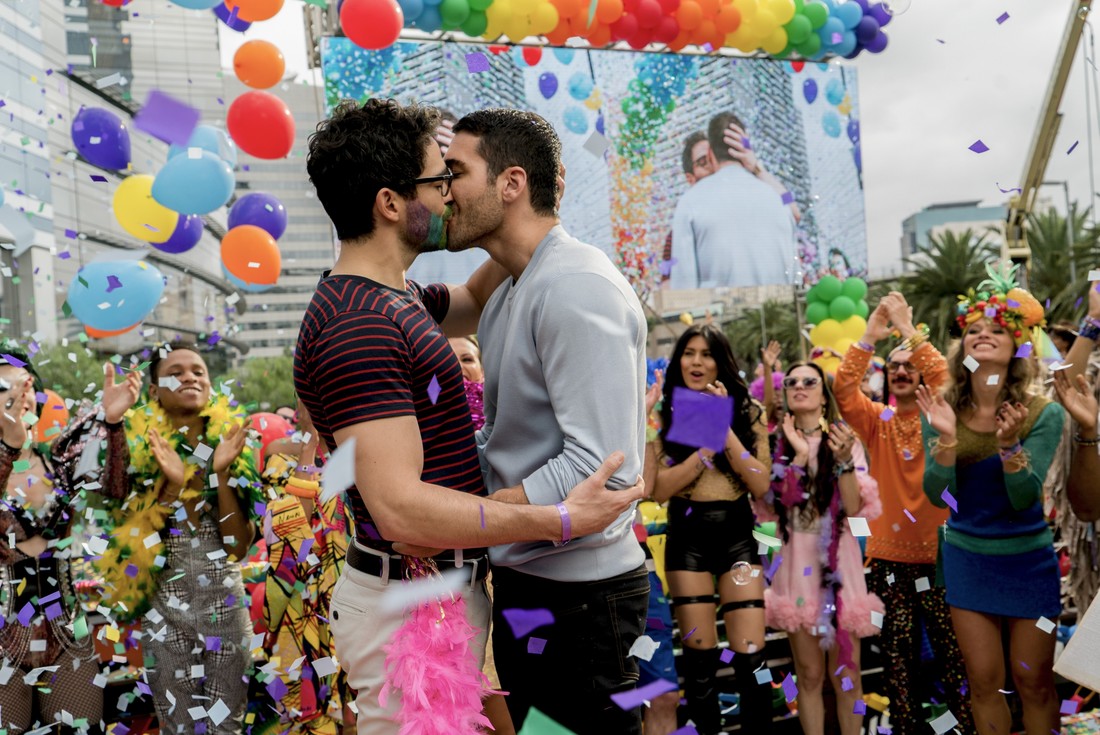 Sense8 is a drama series where eight strangers from around the world find themselves connected. Chicago filmmakers Lana Wachowski and Lilly Wachowski created the Netflix series with J. Michael Straczynski of Thor fame.

The first season already won a GLAAD Media Award for Outstanding Drama Series. The second season began on May 5.

Spanish actor Miguel Angel Silvestre stars as Lito Rodriguez, who wrestles with being in the closet in his film career in Mexico City.

Silvestre is also knowns for the past Pedro Almodovar film I’m So Excited and will voice the upcoming cartoon Ferdinand in the future.

JN: (Jerry Nunn) Hi, Miguel. What part of Spain are you from?

MAS: (Miguel Angel Silvestre) I am from a small town near the Mediterranean Sea between Barcelona and Valencia.

JN: I studied Spanish in Valencia.

MAS: My town is 60 kilometers from the there. It is a beautiful place.

MAS: Las Fallas [laughs]! You got the best from Spain then.

JN: Did you study theater?

MAS: I studied with Juan Carlos Corazza. He was my main teacher that taught me a lot of things.

I studied physical therapy in the university in Spain. When I was finishing I had two subjects left so took theater in Valencia. I got an opportunity for a film. I had to decide what I liked more and knew acting would make me happy.

JN: How did you wind up working with Pedro Almodovar?

MAS: That happened after working five years in acting. He saw a film of mine called La Distancia. It was a boxing film. The director did a great job and it speaks about redemption and guilt.

They called me and asked me to read for one of the parts in Pedro’s film. They asked me to come to the production company to read it for them. The place is full of art and pictures of Pedro’s work. I am such a fan of his. I grew up with those pictures. When I entered and they asked me to read we started laughing a lot. He asked me to be in the film. I asked him to repeat that like ten times because that moment was forever for me! That was the most beautiful moments I have had as an actor.

JN: How were you cast in Sense8?

MAS: I did four auditions for Sense8. First one in Madrid, then two in Los Angeles. They told me the Wachowski Sisters wanted to meet me in London. I did the last audition there. I told my agent I wanted to treat her to dinner. She told me to wait to celebrate, but I knew a connection with them. I remember making mistakes in the audition and the Wachowski sisters were so gentle with me and laughing, telling me to go with it. I felt so good at that audition and could tell they liked me. I knew they would call me, but it took one month. I was waiting every day. I thought I maybe celebrated too soon.

The casting director called me and asked to Skype the call because the Wachowskis wanted to see my face when I get the role. That was another moment that I wanted to remember, Almodovar’s and that one!

MAS: For many reasons I am proud of playing him. I never thought I would be working with the Wachowskis. I feel so privileged, and thankful. There are people in my family that belong to the LGBT community. Thanks to them I have such a beautiful education, respect, and empathy. For me it's giving voice to their struggles when we were in a dictatorship. My father once described our family members as being true to themselves and authentic, even when the system was not making it easy for them. My sister and I looked up to them with such an admiration.

For me it was an incredible opportunity to work with directors like this. I made it very clear that to do this character I would want this to honor how brave the character is. I also wanted a beautiful message about empathy. I knew the Wachowskis were so committed with the cause.

I told Lana I was a bit scared, but I was willing to do whatever they wanted. I completely trusted in where the message would land. I did everything she asked me to.

We had to go for it. We didn’t have time to hesitate. We were shooting in Sao Paulo in from of four million people. When she told me to take my clothes off I didn’t even hesitate. I knew she would be put it in a nice way for people to see it with beautiful eyes.

JN: So you are okay with all the nudity in Sense8?

MAS: I am completely okay with it. For Lana it is the same way she shows violence she wants to tell about desire and love. When we were kids in Spain we were not allowed to see violence. Our parents are very stubborn with that. When there was violence on TV they would switch it off. When there was sex they would say to cover your eyes. Everyone was looking through the gap of your fingers to see!

I think that is why we are more used to sexuality, desire, and love. I think the Wachowskis put it in a poetic way. I like the results and I am proud of it.

JN: Do you have an exercise routine to do with all the nakedness?

MAS: Nope. We obviously travel all over the world and do some exercise together. We will run or lift weights. Basically I just climb right now. That is the sport I am very passionate about. It is a complete workout. It involves elasticity, balance, and strength.

JN: The cast must be very close.

MAS: Yes. We became close from the beginning for many reasons. There are vulnerable scenes where there are all the different cultures. It resonates with all of them. It can be a huge issue with each individual country.

JN: Is Sense8 challenging as an actor?

MAS: Those are the things I love the most that Lana puts me through. I can laugh about myself being an actor. When I see my habits on the TV I don’t think them. I will see my tricks, but with the character of Lito I can do it. I can go as cheesy and overacted as I want. I can celebrate that. I have the most fun doing those scenes.

JN: You are going to be on the show Narcos also?

MAS: Yes, I will be on the third season. It is a small role, but very important to the story. It is with money laundering character. It is an orphan that is with the cartel. When he is very young he wins a mathematic contest. They sent me to Harvard and I become his money launderer.

JN: What else do you have coming up?

MAS: The fourth season of Velvet, which is a show that Netflix bought that I did in Spain is coming in May also.

I am reading and auctioning. I am fighting to get more jobs. For me in the United States I have to fight to get auditions. I struggle with the accent sometimes. I have a lot of work and studying to do.

MAS: The winter was so tough. I have to say it is my favorite city in the United States in the summertime, because it is so alive. There is all the museums, and architecture. I like the summer movies at the Bean!