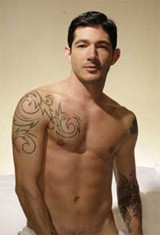 Johnny Hazzard... the man, the myth, the chef? He’s an audiophile, a musician, a foodie and a very sexy man. We sat down with Mr. Hazzard recently to talk about his career, the success of his blog, and the atmosphere on the set of his new release In His Dreams. He also discusses the "adult industry" and the meaning of dreams about loose teeth. So, join us for an inside look at what makes this intelligent, handsome guy tick.

Johnny Hazzard co-hosts the 2007 Grabby Awards, May 26th at the Park West Theatre in Chicago.

WW: Tell me about your experience working on the set of In His Dreams.

JH: My experience was very easy. We were all professionals, it allowed us to breeze through the scene and get everybody home on time to beat the traffic.

WW: Was In His Dreams the first time you’ve worked with Trent Atkins?

WW: What was the most vivid dream you remember having recently?

JH: A couple nights ago I was dreaming that I had a molar loose. I was at a dinner party and the tooth kept getting in the way of my speech. I remember being so afraid that it was going to come out during dinner. They say that dreams involving the teeth are an indicator that one feels out of control or ill-prepared.

WW: Do you day dream?

WW: Which performance are you the most proud of so far?

WW: If you did work with another director, or a director did a guest spot at Rascal, who would you want it to be?

JH: I think that Joe Gage would be great. I would welcome anybody from that era with open arms.

WW: Who's the sweetest star you've worked with?

WW: Which performers do you look to for inspiration?

JH: Anybody who has maintained to keep their head on straight and not lose their cool in this business is one to be inspired by.

WW: Describe the effect winning an AVN award for The Wrong Side of the Tracks has had on your career.

JH: It has opened many doors in the way of mainstream acting and allowed me to see that perhaps I can take this a bit farther than the video set.

WW: If you could have sex with any famous musician, who would it be?

JH: No Name. He is uber hot and a hard rock dude, two great combinations in my book.

WW: How long do you plan to be in the industry? What do you want to do next?

WW: What are your thoughts about the industry overall?

JH: I think we have come a long way in society; is not so taboo and hush hush as it used to be. We have also shed the stigma of being an underground drug fueled predatory business and have proved to be a multi billion dollar industry ran by some really great, smart and prized people. In this industry I have been exposed to things and people that I would not have been exposed to otherwise. I have no idea where my career in porn might lead but because of it I think it will be the springboard for something great.

WW: Tell me more about the continued success of your blog. What blogs, if any, do you read?

JH: I have been very surprised at the amount of people who read my blog and respond to it via the message board. The Web is a powerful vehicle to reach the masses and I am happy to be part of it. I think it has showed the fans and others that I am much more than what they are led to perceive and that I actually have something to say. I do not read many other blogs; I find it time consuming enough to keep tabs on my own.

JH: Living by myself I do not get to cook often enough. It’s not he same cooking for one’s self. When I do get the chance to cook I love to grill. Experimenting with different spice rubs and marinades gets me really excited, especially when I get to share it with somebody else. I cannot remember the last time somebody has cooked for me. Oh wait, it was yesterday at a pool party, it was hamburgers with blue cheese.

Johnny Hazzard co-hosts the 2007 Grabby Awards, May 26th at Chicago's Park West Theatre. (GOING TO THE GRABBYS CONTEST: Enter to Win tickets to the Grabbys from Gay Chicago Magazine and ChicagoPride.com)