I especially want queer folks that might feel they are not part of the theater world but want to do it come see it. 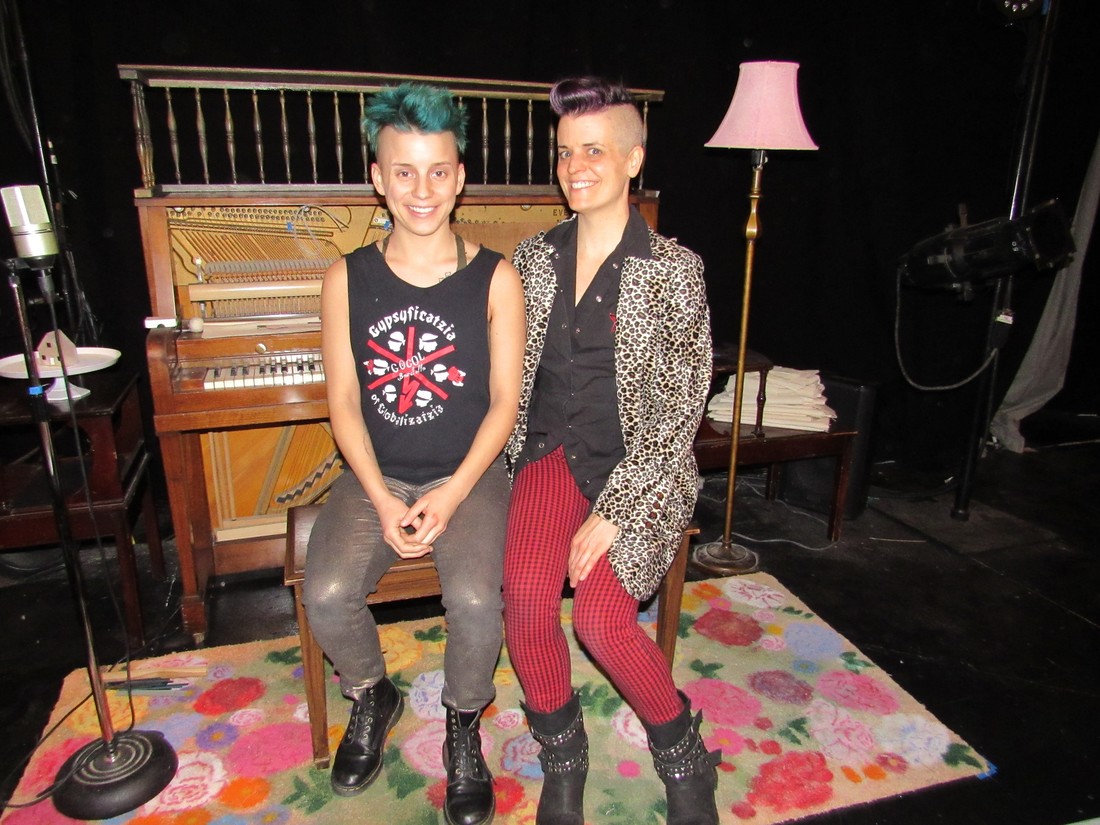 The classic William Inge play Picnic is turned upside down in a new gender bending production at American Theater Co. Trans artistic director Will Davis has created something new and fresh thanks to a stellar cast, including Jeff Award-winner Molly Brennan as Hal, and Malic White as Madge.

The story takes place on Labor Day in a small town where everyone is planning for a picnic. A drifter arrives in town named Hal Carter who shakes things up.

Brennan has performed with Steppenwolf, Goodman, Lookingglass, and Lyric Opera.

White was seen in shows like Too Much Light Makes the Baby Go Blind, Pop Waits, and American Idiot.

Nunn sat down with the pair after Picnic backstage one evening.

JN: (Jerry Nunn) Where are you both from?

MB: (Molly Brennan) I moved to Chicago in 1993. I am from New Hampshire. I grew up and went to school there. I studied theater with a focus on the classics.

MW: (Malic White) I am from Indiana. I moved here in 2008. I studied creative writing and gender studies.

JN: What are some favorite past shows that you liked?

MB: Animal Crackers at the Goodman, 500 Clown Macbeth, 500 Clown Frankenstein, Lookingglass Alice was a favorite, along with The Life and Death of Madam Barker at Red Tape. I played Roy Batty that was Rutger Hauer’s character in Blade Runner in a staged show for two nights and only 50 people saw it, but it was awesome!

Of course there is Pop Waits which was my two person show with Malic last year.

MW: I primarily work with the Neo-Futurists. I have been an ensemble member there since 2012. My favorite there was Pop Waits, which Molly and I co-wrote.

I played St. Jimmy in American Idiot with the Hypocrites a couple of years ago. That was a super fun character to do.

JN: Talk about your relationship together.

MW: We are partners.

MB: Our anniversary is coming up tomorrow. We live together and make art together. I personally have never dated within the artistic community. I have never dated actors and had a thing about that, but the germ of our relationship is making work together.

Our art relationship is super healthy and strong, which is great because it makes it easy at home. We have different approaches about work, but we work really well together.

We have a domestic partnership, live together, and have a dog.

JN: What is your dog’s name?

MB: It is short for Obakekuro which means “black ghost” from a house show I did.

MW: Being in this show with Molly has been very interesting and exciting, because in the past we created our own work together. Being in a straight play with someone else directing was a new experience. It is fun being an actor and focusing on that part of the craft. We have characters that have a romantic relationship, and being one in real life has made it quite easy.

MB: And not predictably so. I have witnessed that not go so well, but we have managed it really well.

One of my biggest challenges onstage is intimacy. I have a hard time with stage kisses. Being able to do that with a partner onstage takes that edge off. It is relieving, because I have a lot of anxiety about being intimate with people I am not intimate with, even though I am an actor. I can do all of these other things like yell at people or laugh at them, but that is difficult for me.

JN: Watching the show it seems so effortless for you both.

MB: This was easy thanks to Will. He is great by the way. Violence and intimacy staging is not handled very well sometimes. Will and Evvie Allison, who does choreography, made a safe and creative room. People felt taken care of and there was never any ickiness.

JN: Molly, I have been a fan of yours since you taught us to be pirates in a show at Navy Pier. You are so magnetic.

MB: Thank you. Theater is my favorite way to be with people, whether it is going out in the audience or being onstage. Storytelling is a great way to engage with people. I don’t have to do the storytelling, someone else can be. In terms of of connecting with people and comfort, it is my favorite.

JN: Talk about your characters in Picnic.

MW: I play Madge. According to what others in the play say is the prettiest girl in town. From the top of the play Madge is struggling with identity, who she is, and who she wants to be. I don’t think she knows the answer to that question, but I think she sees part of the answer in Hal.

MB: Hal Carter comes to town and he is an old college mate of Madge’s boyfriend Alan. Basically, Hal hit his peak in high school and college. He was a football star. He’s a bum now that travels from town to town. He is searching for some grounding, but doesn’t seem to be able to pull himself away from his own desires. He is led by his own desires so keeps screwing up, and losing money.

It is interesting because he is one of the freest characters in the play. He is not tethered to this town. He hops on freight trains. He’s strong, good looking, and charming so he gets by to a certain degree until things start happening. He disrupts this small town where people have their ideas about what should happen.

He discovers a connection with the prettiest girl in town, who does not want that to be her legacy, just like he doesn't want to be the handsome jock. He wants to be a whole person.

JN: Had either of you seen Picnic in the past?

MB: I had seen it. I remember it being a staple of high school theater festivals  when I was in school in the ‘80s. My mother, who is a theater teacher actually taught this play. It is one of her favorites.

JN: Is she coming to see it?

MB: Yes, she is. She thought I was playing Rosemary but I told her Hal and she said, “Perfect!”

I have seen several high school productions of Picnic and the movie.

JN: There was lots of gender flipping, but it was not a drag show. People were not dressed up over the top.

MB: Yes, like Michael Turrentine had his own hair and didn’t have a wig or garish makeup. That is Will. He cast it based on our energies and who we are. When we did that first read through and I heard the words coming out of those bodies I thought how perfect it would be. The fact that the genders don’t match and it is not an all white cast, Davis was able to depart from how it has been done before. We are not adding anything to the script. We are saying the words but it sounds different coming out of me. I am never going to be William Holden. That is never going to happen.

When these words come out of Malic it means something different. The cast saying these words is a great way to make art and a political statement.

JN: I was trying to think of examples of this form of casting being done in the past.

MB: Why shouldn’t it be done this way? Especially when working with classic contemporary canon. Why do Picnic in a traditional way? If you want to celebrate the canon, which has largely been exclusive, even with Inge who was gay and could not be himself. Even with his writing he couldn’t be himself. He only revealed little bits about himself.

I feel the only way to move forward with this is allowing other bodies and entities to play these parts.

You can’t do it the way it was written in 1953. You want to include people or don’t do it at all. We can’t move forward with a cis, white agenda.

JN: After seeing this show people will want to work with Will.

MB: That is how I felt when I saw Men on Boats. Will Davis is the leader that other leaders in this town should be looking to. I firmly believe that.

MW: I hope this shows the theater community that it makes an enormous difference putting those in charge that have not been allowed to be in charge. It completely changes not just the creative work that comes out of it, but the process as well.

Will was the most kind, and affirming director I have ever worked with, because he understood me, and the people in the room in a way that a straight, cis, white, male director would not have been able to do with this group of people.

We were free to be able to do out creative work and not be educators to the people that were supposed to be leading us, which is a challenge I have faced a lot.

MW: The day after Picnic closes I leave for DC. I am going to be in a production of Hir, from the performance artist Taylor Mac. It is Taylor’s challenge to write their own self to write a classic living room drama. I am play Max, the 17 year old trans child in a very bizarre family. This will be  seen at the Woolly Mammoth Theatre where I will be for the spring and summer.

JN: Will Molly be out in the cold?

MB: I will come visit! I am head of physical combat at The Actors Gymnasium. Our pro trainer program will be doing their showcase at the end of the spring, so I will be helping with that.

I will also be putting funds together for our radically inclusive musical Battle Axe Betty. I did a workshop of it here, but now want to get the next phase of it done. The musical is focused on artist with disabilities involved in the process. We integrate creatively modes of accessibility, so American sign language, captioning, and live audio describe are built into the art of the piece instead of being something that comes after the piece. It is part of the language of the show.

JN: Anything else you want to say about Picnic?

MB: I hope people will come see it. I especially want queer folks that might feel they are not part of the theater world but want to do it come see it. I feel like Will is providing that space and that hope so we can all do this together.