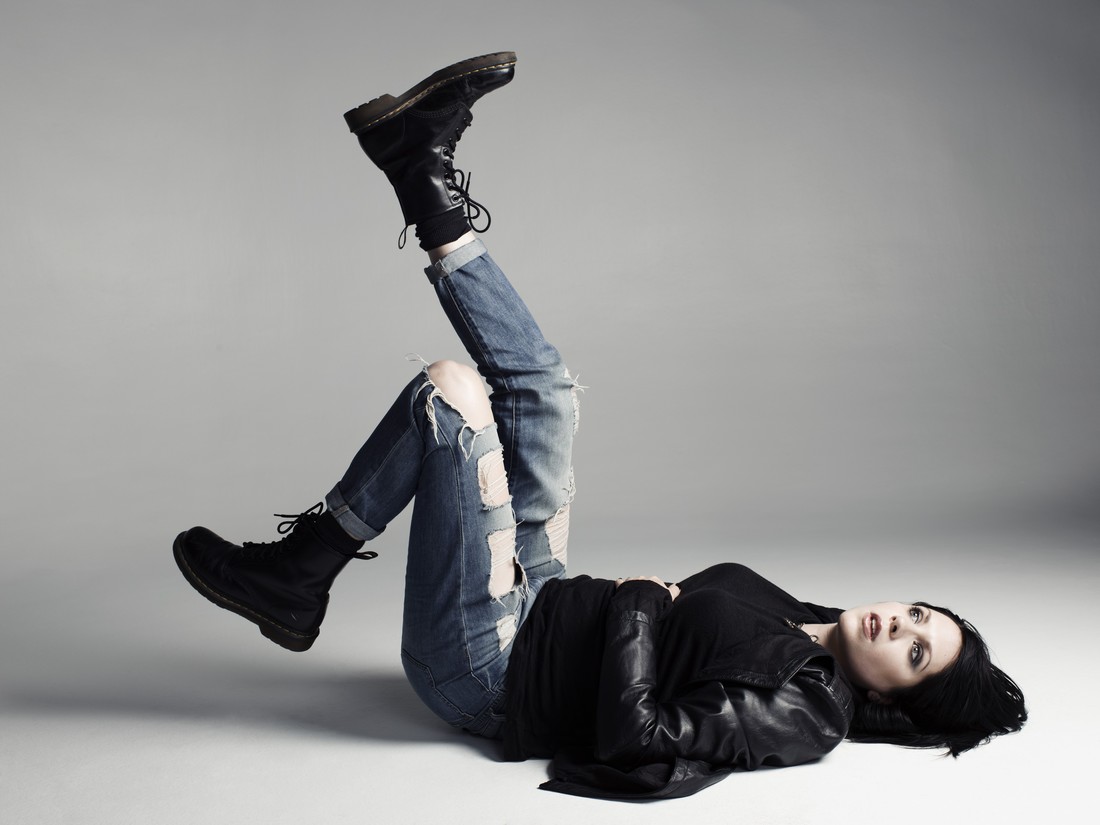 Performer K. Flay is breaking down barriers musically these days

K. Flay is crushing it these days with a unique and original sound. Kristine Flaherty grew out of the Chicago suburbs to rise to the top. She attended New Trier Township High School and started dressing like a tomboy. After moving to California to study, she began writing hip hop music and recorded it on her laptop. After making several EPs and a mixtape her fanbase continued to grow.

Her latest EP Crush Me was released over the summer. Nunn talked to her on her tour bus at a recent Chicago stop on her headlining tour.

JN: (Jerry Nunn) You are originally from Illinois but what made you move to California?

KF: (K. Flay) I moved for college. I moved to Brooklyn a few years after college but then returned to California. My parents wound up moving to Oakland. We dispersed but I still love being in Chicago. I grew up in Wilmette.

KF: I did not. I wasn’t on a stage until college. I stumbled into making music. I was talking to a friend and they suggested I make a song. That set me on this strange path that's continued until this day.

JN: How did you develop your unique sound?

KF: I think it was a product of not being part of a scene. Most of my musical friends came up doing garage rock or electronic. For me I was always in a bit of a vacuum. I would be invited to open for so many diverse artists. That made me feel scene less. That can be frustrating but was most of the time inspirational, because it felt like there weren’t any rules to play by.

KF: Exactly, which can be difficult to describe my music to people. It is hard to explain, but in the end it is a good way to be as a musician.

JN: Your new song “Blood in the Cut” is rocking.

KF: I started off with a guitar riff. I was just doing the demo. When we went to produce it we wanted to honor the spirit of that. It has a White Stripes kind of vibe to it. We wanted to see where it would take us.

That has been my orientation for every song. It is following the sentiment and seeing where that leads.

JN: Did you do the treatment for the video?

KF: I worked with the director on that. I think we wanted to create a supernatural mood. There is a person with a power that you see at the end of the video. I wrote the song when I was bummed out. When I produced it I was out in Nashville where I did much of the EP. I was out in the countryside. During that point I was in a much better place emotionally. I was able to see the song differently. It was an expression of power and we wanted to capture that feeling in the video.

JN: Why did you decided to record in Nashville?

KF: Really because of the producer I was working with. His buddy, who is another musician, built a studio out there. I was really happy to work out there. It was just built and we set up shop there. It turned into an incredibly productive space. It was isolated but still felt cozy for me.

JN: “FML” was a cartoon video. How did that come to fruition?

KF: The animator and director for that is a guy name Ken Edge. We had met in Brooklyn. He’s a super talented artist. He had worked on another piece for me on my last record. It was a making of the record. It was completely animated. It was a pleasure working with him.

When I was working on it I didn’t want it to feel too heavy. Even though I am saying “FML” the spirit of it is really that I am loving that. The people that say “FML” are people that have a lot to be grateful for. I wanted there to be that feeling of levity. I felt that could be achieved in an animated form. We approached Ken and he was super stoked.

JN:I have spoken with Mary Lambert about working with you in the past.

KF: Mary is great.  I met Mary through the Macklemore camp. You know since you have talked to her how sincere she is. She’s a good person.

JN: I interviewed Louis the Child at Lollapalooza. Are they from Wilmette like you?

KF: Yes, we went to the same high school. They hit me up on Twitter when I was playing House of Blues here last year. We just connected. I checked out some of their stuff. They were just beginning at that time with only a few remixes out.

I told them to send any demos or ideas, because I was going to be in LA for a few weeks. They sent the original rough version of that. I wrote all the original words and melodies. I sent it back and that was that.

JN: That track “It’s Strange” is a different one for you.

KF: Totally. I have done a lot of different collaborations. I just did something for Cascada last year. That was more of a deep house track. Some of it is really fun for me.

JN: If you could pick one person to work with who would it be?

KF: Andre 3000. I am a huge Outkast fan. I feel they are doing something that has never conformed to any mold. Every album they put out is totally them. You can’t mistake an Outkast song for anyone else in the world. That is quite a feat.

JN: What would you like to tell people about yourself as an artist?

KF: The main thing that I want people to know is that this is an honest project. That is the spirit that runs through everything. Everything that I have been working on the last couple of years I am attempting to be as honest and accurate as possible. Not in the way of pimping out my own life or anything like that, but I try to be vulnerable. I am trying to do that in a way that has a hopeful resolution. That is my goal. That is something that I want out of the music I return to year after year. That is what I am hoping to make.

JN: You are cool with your LGBT fans?

KF: Of course, totally. Coming up in the Bay just in terms of eclectic and diverse spaces in the world, it just has a great energy. It is expected that everyone is at everything. The crowds are mixed in terms of age to spanning the gamut.

People find out about me from rap stuff to electronic to alternative.

JN: What is going on for the rest of the year?

KF: I am touring through Christmas. I have radio shows in December. Next year will be the full length album and back on the road.

JN: Here are some fun questions to get to know you more… favorite movie?

KF: Clueless. I never get sick of watching that movie.

JN: There is one right outside of the tour bus.

KF: I know but the funny thing is that I really eat fast food on tour. When I am at home I live not too far away from McDonald’s. I live in a hipster expensive area. Sometimes I just want a two dollar thing so I got to McDonald’s.

JN: What was your first concert?

KF: It was a Ravinia here and it was The Beach Boys. I was pretty little. The first concert I came into the city for was Coldplay when they were on the first album. It was at the Aragon Ballroom.

JN: You album is called Crush Me so do you have a girl crush?

KF: I have a girl crush on Margaret Atwood the author. I basically love her. She is amazing and super prolific. Her most famous book is called The Handsmaid’s Tale. It is going to be an eight part TV series. She’s Canadian and write fiction, nonfiction, essays, and plays. She is whip smart!