We are grunge kids. 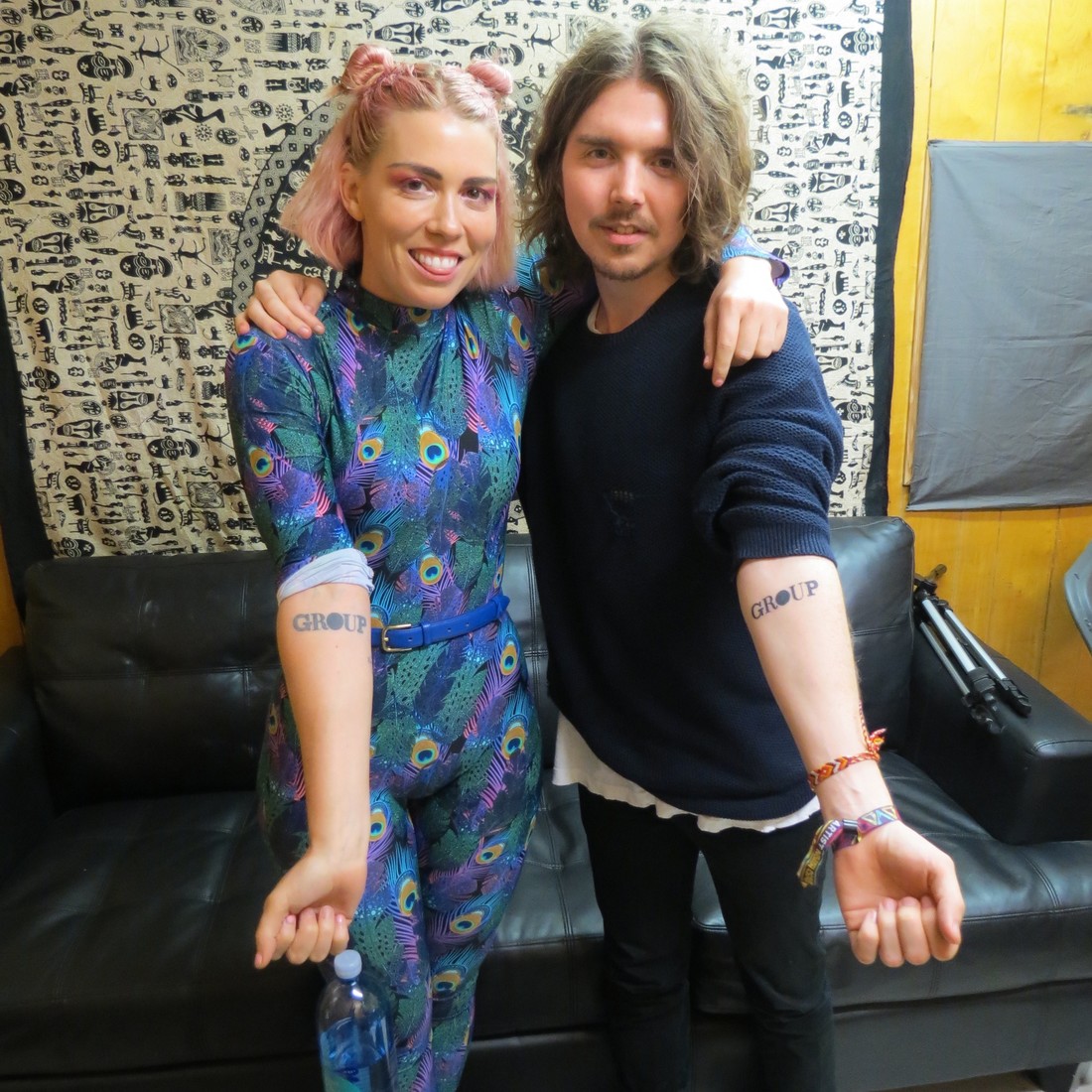 The band Grouplove is a Big Mess with a new album that is getting tons of radio play. The friendship formed in Crete led to a collaboration that has lasted over a decade. The group has released such hits as “Tongue Tied” and “Ways to Go.” Their song have been featured on TV shows like Glee and HBO’s Girls.

They have played such festivals as Lollapalooza, Bonnaroo, Glastonbury, and most recently North Coast Music Festival in Chicago where they sat down to chat about new music.

JN: (Jerry Nunn) So you have been followed around all day with cameras to film a behind the scenes video. How does that feel?

HH: (Hannah Hooper) It has been cool, but I have to say no one has been normal. We just were chatting in the van to show the fans what it is like. This is not what we are always like.

DG: (Daniel Gleason) We are usually dumber than that!

HH: I feel like we are much more honest.

DG: I feel like we were talking about things that we felt we should talk about instead of what we normally would.

JN: Where are you both originally from?

JN: How was Grouplove formed in the first place?

HH: We all met on Tinder!

HH: Well, there is no way to tell the story the short way, but I will try. I was a painter in New York.    My studio mate brought me out to see this hardcore band, which was Christian Zucconi’s band ALOKE. It was love at first sight. I fell madly in love with him from afar. I ended up hanging out with him after the show. I fanned out on him. We hit it off. I weirdly knew we were falling in love that night. That was the guy I was looking for.

Literally I was invited the next day for a residency in Greece for painting. I asked if I could bring someone. So I called Christian who I just met. We hadn’t even made out yet. I asked him to come with Greece with me for the summer. He said yes so we went to Greece. We met Ryan Rabin and Andrew Wessen there. We also met our old bass player who is no longer with us there. We formed a friendship in Greece.

We eventually became a band. When our bass player left, Manchester Orchestra suggested Dan to play for us.

DG: I was about to follow around Pearl Jam for a few shows. I almost said no because it was a temp gig. I had heard of Grouplove but didn’t know the songs. I was about to drive to Philadelphia to see Pearl Jam. I was called again and told I had to do it. I was sure how cool they would be but they are people I would hang out with everyday.

HH: Good because you hang out with us everyday now and are trapped!

JN: Did you ever meet Eddie Vedder?

HH: So one time we go to Australia on tour for Big Day Out, which is six shows. Dan is on the side stage every night watching Pearl Jam. He asked me to come with them. I am more of a Nirvana fan and raised not to watch Pearl Jam. So I go to watch for Dan.

Eddie brings a bottle of wine to Dan.

DG: I was staring at the bottle and didn’t know what to do, but I drank it. On the last night our friends from Portugal the Man gave us an all access pass. I went back to meet him. It was the scariest thing I have ever had to do.

I went up to him and interrupted him. I tapped him on the should. I told him how inspirational he is. He said, “Oh, I have been wanting to talk to you.” My body went so hot that I couldn’t process the moment. I was really drunk at the time. I told him that my first concert was seeing Iggy Pop open for them. He hugged me. It was the craziest thing ever.

JN: I’m glad it worked out for you. Some people don’t want to meet their favorite artist.

DG: And some they shouldn’t! I had heard how cool he is and very gracious with his time.

JN: Let’s switch and talk about the new music. Why is it called Big Mess?

HH: We toured for six years then got off tour. We had lost touch with our family and friends. Our life was a total shit show. The world was a mess. I got pregnant. Somehow through it all we made more art than ever. We wrote 40 songs and recorded an album.

Big Mess is the beautiful and the chaos. In the chaos we were the most creative.

JN: So you have a baby now? Where is the baby?

HH: In a hotel about a mile away from here.

JN: What is her name?

JN: What will be the next single after “Welcome To Your Life?”

HH: If I could pick it then it would be “Traumatized” but we are signed to a label and not able to choose. Listen to it. I personally feel the alternative world needs a song like that. Grouplove gets  coined a “Tongue Tied” style of a band but when you watch us live or listen to a full album then people realize we are a pretty heavy rock band.

DG: We are grunge kids.

HH: We like pop songs also because that is something we love to do. Just like a person that are multiple facets to someone. When I play a song like “Traumatized” and flash to a past song like “Borderlines and Aliens” which I think should also have been a single, it became massive in Australia, I am so in touch with that Grouplove sound that I feel is overlooked a lot.

JN: Does someone in the band DJ?

HH: Ryan Rabin who is our drummer does.

DG: It is for fun. It’s nothing serious.

JN: Someone did at a Lollapalooza at an after party.

DG: It was at the Hard Rock.

HH: I did. I put on the Braveheart Soundtrack and a lot of people left! [everyone laughs] I didn’t take it too seriously…

JN: Where is your jumpsuit from?

HH: There is a woman in LA that makes them for a dance squad. I have been making a bunch also and dry painting them for the Big Mess theme, but tonight they were a little too smelly. It takes a lot of Woolite to clean them!

JN: Is there a gay member in the group?

HH: There is not but very gay friendly. I have been with women in the past.

JN: So you have been in the lady pond before. Talk about this water charity.

DG: It is called charity: water. A dollar from all our tickets goes towards it. For every $10,000 that will build a single well for a village in Africa. That will end up saving thousands of lives. Literally thousands of people die every day from contaminated water. It is a much deeper problem than people realize. Some of the places are so far away that they can be overlooked.

Our manager heard a podcast where the founder was on it. He was moved by it and sent it to us.

We had been looking to help out with something. As things progress and we become more financially stable as individuals in this band, you start to want to give back.

HH: We wanted to find a charity where the money actually goes to the problem.

DG: This really appealed to us because they send pictures of the well. It was tangible. We could see the good we were doing, rather than just writing a check and crossing your fingers. It seemed like a good way to start.

We will move onto other stuff in the future but this one really connected with us.

There is even this t-shirt that I am wearing. It says, “The future is female, male, and everything in between.” It is $40 and goes to the LGBT community. Even in your personal life finding things like that goes a long way.