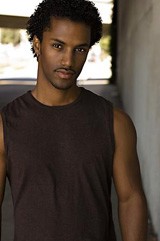 All this talk about their not being enough good gay roles in Hollywood—don’t tell that to actor Darryl Stephens, who’s got not one, not two, but three good gay roles lined up over the next several months.

In addition to his day gig as the title character in LOGO’s full length series Noah’s Arc, Darryl stars as erotic dance instructor Angel in the just released, over-the-top gay spoof Another Gay Movie and takes on a decidedly more dramatic role as the roomie of a male escort he may be falling in love with in Boy Culture, due out next year. The films show Stephens at opposite ends of the acting spectrum—in Boy, he internalizes damn near every emotion. In Gay, he spends the entire first scene in a barely there g-string teaching a white boy how to work that ass.

Noah’s Arc is perhaps a happy medium. The outspoken title character, akin to a slighty-saucier Carrie Bradshaw of Sex in the City, has become as famous for his outlandish hairdo’s and outfits as he has for being the emotional core of the show. And as Noah enters its second season, the young actor looks forward to honing in on the character as an actor and the opportunity to grow and stretch throughout the series’ run.

RVM: What attracted you to Noah? Is it a project you’d been following for a while?

DS: No actually, I didn’t know anything about the role I ended up with, I read for the role of Rickey, which in all honesty I was doubtful I would be able to book because I didn’t come off as that kind of guy. And then Patrik (Ian-Polik, the show’s creator) called me and told me he’d reworked some of the characters and he wanted me to play Noah. So it wasn’t even so much an issue of me reading for the character of Noah. I was told that I booked the show and then I was told I booked Noah.

RVM: How have your family and friends reacted to the series?

DS: You know, it varies. My mom is very supportive of me and happy that I’ve got work. But she will basically call me every Saturday and talk to me about what she thought worked in the episode and what she thought didn’t. She’s very candid. We’re very cool, so she just lets me know… In fact, most of my friends are the same way. Everyone is very supportive of the fact that I’ve got work, but they’re also very candid and have no problem taking me to task.

RVM: Do they ever cross the line?

DS: Yeah, actually just recently I had to scold somebody very close to me for trying to read me for an outfit. I was like, you know what, 'I don't pick the clothes. I am a person and I am playing a character and if you have a gripe you can call the wardrobe person.'

RVM: Do you ever have to deal with any flak—people you don’t know critiquing the show, criticizing the characters?

DS: There were quite a few blogs I was foolish to let myself read when the show first started that characterized all of the four main guys as overly effeminate stereotypes, and granted it is a show about four fabulous gay guys, but I didn’t think we were necessarily playing stereotypes. I felt we were playing very specific characters and we were being true to the characters as we understood them. There was this—I don’t want to call it a movement because it wasn’t that organized—but there was his faction of people who felt we weren’t representing black gay men across the board because no one was basically representing some DL thug who was walking around with his pants halfway down his ass.

RVM: It’s got to be a challenge because you guys are it. You complain about any other type of character on TV and you’ve got 15 other shows with a guy just like him.

DS: Yeah, we are the black gay show at this point. Hopefully when more shows start to represent characters from the black, gay population, hopefully they won’t count on this show to represent so much of themselves and they’ll just appreciate the show for what it is.

RVM: I was reading an interview with Patrik in which he said the show has trouble getting coverage from the gay press. Have you felt any of that?

DS: It’s interesting. This particular show, because we’re all black actors… because we’re all basically new actors, we all agreed going into it that we wouldn’t discuss our sexuality in the press. Because there has been a tendency when straight actors play gay roles, they get more attention or more praise for being brave enough to play gay characters than the gay actors who are playing characters just as far outside of themselves. And I think that, particularly with The Advocate, it was an issue. A lot of the gay press want out gay actors, and I think the gay press is very happy to praise straight actors, but people who aren’t talking, I think they fall into a black hole, as it were (laughs). There are people who believe the gay press’ unwillingness to showcase the program has to do with the fact that it’s a black cast and black men are not appealing to the gay masses, and I can see that prospective, but as an actor, I try to focus on the work and the positive response.