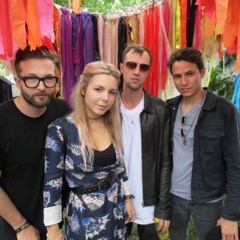 The band Hælos has a chat while in Chicago

Hælos is a British music band that is breaking down barriers in terms of creativity and electronic music. Their first full length album debuted this year called Full Circle. It reached number five on the US Billboard electronic charts.

Nunn talked to them in the media area during Lollapalooza.

JN: (Jerry Nunn) Is everyone in the band from London?

LB: (Lotti Benardout) No, not all of us.

JN: How did you wind up with them?

DV: I live in London now. I grew up in Tucson though.

DG: (Dominic Goldsmith) He is being modest. His basically one of the best guitar players that we have ever had the pleasure to meet. From our first session it was very clear that we had to work together.

JN: How long have you been together as a group?

LB: It has been about two years now.

DG: Plus a couple of months.

JN: This is your first Lollapalooza?

JN: Is the first time in Chicago?

LB: No, we were here in March.

AD: (Arthur Delaney) We were at the Empty Bottle.

JN: How did the group form?

AD: Both me and Lotti were working with Dom on little projects. A track called “Dust” came together. That was the first song we put out.

LB: We met through friends of friends. The music scene in London is like that.

DG: That used to be the London Astoria. That is a sad one. We were just talking about that earlier because the Double Door in Chicago is apparently shutting down. The Astoria where G-A-Y used to be was torn down to make a rail station.

We have played at Heaven, which is where G-A-Y is now.

JN: I have been there.

DG: It is a great club and scene. It is a very important one. That is something I am very proud of to have played there.

AD: Very much so.

AD: I think it was at the end of a bad break up. There are visuals that show the spiritual quest for understanding and perspective. Really from the pain with that track in particular. It was a magic session with that song. I think all three of us then Daniel came and did some guitar for that session as well. That is really where it all happened for this band. It has grown out of that.

DG: A lot of the principal for where our harmonies lie including synth sounds and drum sounds. It opened doors with that track. It is multi faceted because it is about amusing yourself as well, and not loving yourself, as it is about other people loving you.

That is something we try to achieve with the music by making it layered like that so that it can mean as much to as many people as possible.

LB: It is a sad song but also quite empowering. We try to draw on an many sides as possible with emotion in our music.

LB: We made that when were on tour in January. We brought our video camera. We did a video trilogy before. This was the first time we were showing ourselves to people and putting a face to the music a bit. We wanted to do it in the most honest way. We wanted to show us on the road how we really are.

DG: Arthur on this one made sure we got the classic skateboarding camera. It has a certain aesthetic. Arthur was pushing for this certain way of doing it. It came out very honest. I watched it the first time having not been a part of making it, just being in it. I was really proud of Arthur and Lotti for smashing that. To take something and do it from scratch without any outside help at all is quite an undertaking at times, particularly when it is a music video. It made me really proud to be working with them.

JN: I noticed some of the same actors in different videos.

LB: That was the trilogy. It was shot in three days on film. Setting those limitations it was quite expensive to shoot the film so we wanted to do it in one go. We had to send the tracks to Jesse Jenkins, who directed the backbones of it. He listened to the album on repeat and came up with the narrative. We did have some input.

It was capturing a mood and a feel that is not track specific. That is what came out of the edit. We wanted what track worked best with which visual.

JN: How was Pitchfork Paris?

DG: It was cool but feels like a long time ago.

AD: I am not going to bring up the story.

DG: She is usually so tame.

LB: I lost the band then found them again.

DG: There was an incident involving Deerhunter’s manager. Wait, that sounds bad...

LB: We had a very deep conversation.

AD: It was absolutely fine. The funny thing is it just feels like ages ago.

AD: November of last year. The amount of stuff that has happened this year like releasing our first record and touring the US, this is our fourth time in the US this year. We feel humbled and blessed. It has been a crazy time. Pitchfork Paris was really fun. The lineup was crazy good, so is Lolla today.

JN: You should play Pitchfork here in Chicago.

LB: We would love that.

AD: We wanted to have a name that enraptured everything and was all encompassing. Hælos is about things being encased in religion and science, things being in circles.

It felt like one of those things where we could dig deeper and deeper without a bottom to it. We put the A and E symbol to it to twist it up and make it more unique.

We are always seeking things that have depth.

DG: There is a few people in this project so it has to mean a lot to each of us. If we achieve that then it will mean a lot of things to other people as well. If you can interpret something multiple ways that is our goal.

JN: What is your goal for the rest of the year?

AD: We are going to work really hard. We have a lot of touring to do. We are playing loads of festivals. We really want to work on our next record and get that done. We want to move forward and take snapshots along the way!