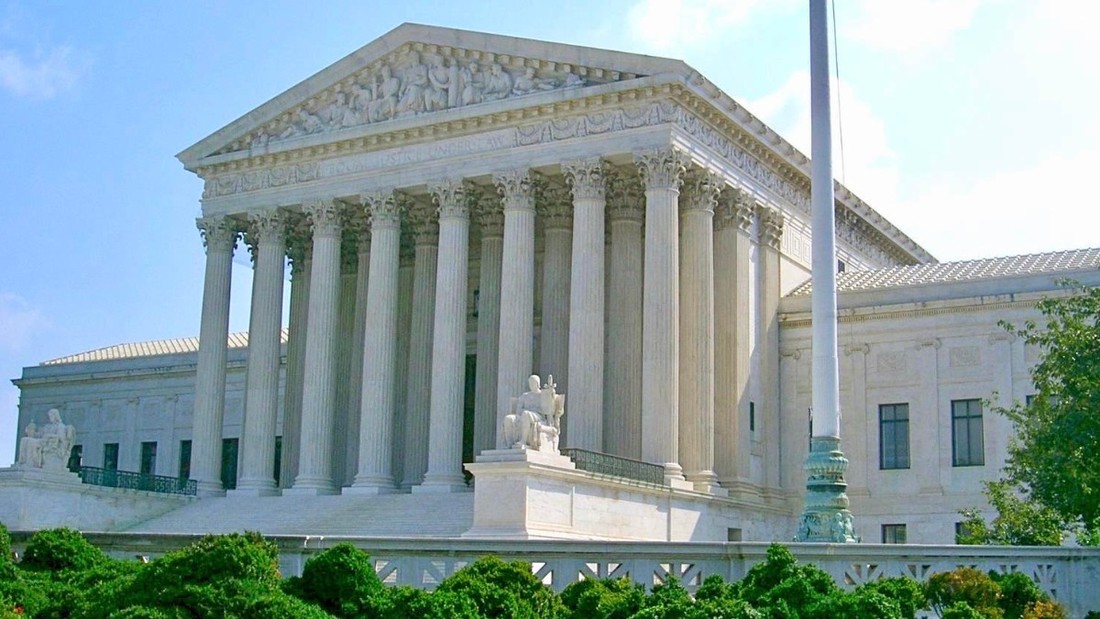 LGBT civil rights organizations, including Equality Illinois, are reacting to the nomination of Brett Kavanaugh to the U.S. Supreme Court.

President Donald Trump on Monday announced the nomination of Kavanaugh, 53, to replace Justice Anthony Kennedy, who announced his retirement from the bench last month.

We at Equality Illinois will work with our state and national partners to analyze Judge Kavanaugh's record and call our community to action in the coming days. We will fight and resist an anti-LGBTQ nominee who would try to turn back the clock on our civil rights. The history of LGBTQ people demonstrates that we know how to show up, speak up, and fight back.

Judge Kavanaugh's record must adhere to our core constitutional values: equal protection under the law, the dignity of each person, and the freedom to be who you are without burden or discrimination. This is particularly critical now, at a time when the civil rights of LGBTQ people are under attack by the Trump Administration.

Judge Kavanaugh's record and independence should be deliberately and seriously scrutinized and evaluated to ensure his commitment to those core constitutional values. And the United States Senate must do its job and be faithful to our constitutional values and to the rights of the American people.

Federal courts have played critical roles in helping to advance the civil rights of LGBTQ people, including decriminalizing same-sex relationships, fighting anti-LGBTQ discrimination, defending the freedom to marry, and protecting transgender students in schools. These ruling have recognized our shared American values of equality, dignity, and the freedom to be who we are without burden or discrimination.

The opponents of equality want to transform our federal court system into instruments that would turn back the civil rights clock and allow a broad right to discriminate in public life against LGBTQ people and other historically marginalized communities. They are currently one justice away from that power, which is why scrutiny of this nominee's jurisprudence is critical for our community.

Today, Rachel B. Tiven, Chief Executive Officer of Lambda Legal, issued the following statement in response to President Trump's decision to nominate Judge Brett Kavanaugh to be the next Associate Justice of the Supreme Court of the United States:

Judge Kavanaugh would guarantee 40 more years of Trump's values on the Supreme Court. Like every other judicial nominee who has a seal of approval from the Heritage Foundation and the Federalist Society, Judge Kavanaugh shares Donald Trump's same distorted view of the law. We have good reason to fear that Judge Kavanaugh will abuse his power on the Court to protect the wealthy and the powerful while depriving LGBT Americans of our dignity, demeaning our community, and diminishing our status as equal citizens. There is too much at stake to allow Judge Kavanaugh to sit on the Court that, over its history, has decided who can marry, who can vote, and who is equal.

President Trump wants a Supreme Court justice who looks like him, acts like him, and only protects people like him. Brett Kavanaugh has argued that sitting Presidents should not be subject to civil or criminal charges while in office and that presidents should be able to dismiss any lawyer "out to get him." Kavanaugh also thinks that the president does not need to follow the law if he thinks the law is unconstitutional. At this moment in our history, the country not only deserves but needs a judge who will be loyal first and foremost to our Constitution and the rule of law. During his last confirmation hearing, Judge Kavanaugh tried to obfuscate his involvement in the development of the Bush White House's torture policies. We do not believe that Judge Kavanaugh can be trusted with the incredible responsibility of a seat on the Supreme Court at a time when forces are aligned to undermine marriage equality, access to abortion and the Affordable Care Act. A judge with this kind of record should not occupy a seat on the Supreme Court that has been the critical swing vote on LGBT issues, as well as abortion, healthcare, voting rights, and many other important civil rights questions, for decades to come.

Throughout this nomination process, Lambda Legal will continue to lead the fight to protect LGBT people from those who seek to do us harm — whether that's in state courts or the highest court in the land. But this fight is also about every American's right to affordable healthcare and reproductive freedom. The President chose Judge Kavanaugh to gut abortion and birth control, to erase coverage for pre-existing conditions, and to undermine marriage equality. This is why Democrats must hold Senate Republicans to the 'McConnell Standard' and oppose any hearing or vote on Judge Kavanaugh's nomination to the Supreme Court until after the 2018 mid-term elections. We cannot afford 40 more years of Trump values on this court.

GLAAD, the world's largest LGBTQ media advocacy organization, today condemned President Trump's nomination of Brett Kavanaugh for the U.S. Supreme Court seat made vacant by the retirement of Justice Anthony Kennedy. Kavanaugh's extreme conservative record and his past support by Southern Poverty Law Center-designated anti-LGBTQ hate group Family Resource Council (FRC) are deeply concerning. Kavanaugh could carry out the expressed views of President Trump, who as a candidate stated that he disagreed with the Supreme Court's gay marriage ruling in the case of Obergefell v. Hodgesand said he would "strongly consider" appointing judges who would overturn the decision.

GLAAD encouraged supporters to contact their Senators via the organization's Amp Your Voice Action Center.

"If confirmed, Brett Kavanaugh will have the chance to codify President Trump and Vice President Pence's dangerous anti-LGBTQ record and the agenda of anti-LGBTQ groups into law for decades to come," said Sarah Kate Ellis, President and CEO of GLAAD. "Like Neil Gorsuch before him, Kavanaugh is an ideologically driven pick designed to create an activist Supreme Court that will undermine rights and protections for women, LGBTQ people, immigrants, and all vulnerable people. Americans do not want or need 40 more years of Trump's values."

Known anti-LGBTQ hate group Family Resource Council has supported Kavanaugh's nomination to the D.C. Circuit Court of appeals, and several anti-LGBTQ groups and organizations are also known to have played a role in recommending and vetting President Trump's lists of Supreme Court nominations in advance, including Kavanaugh.

The Federalist Society, a pipeline for conservative judges to gain appointments, including to the Supreme Court, vetted Kavanaugh. The Federalist Society has produced materials arguing against every major LGBTQ policy proposal including the Employment Non Discrimination Act,hate crimes legislation, Don't Ask Don't Tell, and transgender accommodations. Kavanaugh has been a member of the Federalist Society which was also instrumental in Chief Justice Roberts' nomination and confirmation along with Justices Neil Gorsuch and Samuel Alito, all of whom were members.

Kavanaugh was also vetted, and is considered to be a "stellar" judge, by the virulently anti-LGBTQ Heritage Foundation, which has claimed that marriage equality would make people less monogamous, increase abortions, and eventually lead to "group marriage," and consistently opposes transgender rights.

Should Kavanaugh be confirmed, marriage equality would not be the only Supreme Court precedent in jeopardy. As a candidate, President Trump stated that he will only put "pro life" judges on the court, and that he wants to overturn the landmark Roe v. Wade decision that recognized that the constitutional right to privacy extends to a woman's right to make personal medical decisions, including access to abortion. Kavanaugh dissented on a recent decision that allowed an immigrant teenager to access an abortion.

President Trump's concerning selection of Brett Kavanaugh, and his record of appointing anti-LGBTQ federal judges, have put hard won LGBTQ rights and protections in jeopardy. GLAAD is encouraging people to contact their Senators and ask them to support pro-equality judicial nominations and oppose Kavanaugh's confirmation at our Amp Your Voice Action Center.

Today, the Human Rights Campaign (HRC), the nation's largest lesbian, gay, bisexual, transgender and queer (LGBTQ) civil rights organization, called on the Senate to reject Brett Kavanaugh, who was pre-cleared by anti-LGBTQ and anti-choice organizations and nominated by the Trump-Pence Administration to the Supreme Court.

"In nominating Brett Kavanaugh, Donald Trump has followed through on his threat to nominate a justice who would undermine LGBTQ equality, women's reproductive rights and affordable healthcare," said HRC President Chad Griffin. "Now, the Senate has a responsibility to fulfill its constitutional duty, serve as a check on this reckless president and reject Brett Kavanaugh's nomination. This nominee was hand-picked by anti-LGBTQ, anti-choice groups in an explicit effort to undermine equality — and the prospect of a Justice Kavanaugh threatens to erode our nation's civil rights laws, block transgender troops from bravely serving this nation and allow a license to discriminate against LGBTQ people in every aspect of American life. The 2018 midterm elections just became the most consequential elections of our lifetime, and we must seize the opportunity to pull the emergency brake on this regime. We need to vote this November like our lives depend on it — because they do."

The next Supreme Court justice will shape civil and constitutional rights jurisprudence in the country for decades to come. In the coming years the Supreme Court will be asked to decide critical issues for the LGBTQ community including:

Whether our nation's nondiscrimination laws include protections for LGBTQ people — as many lower courts have already concluded. This would impact employment, housing, healthcare and education civil rights statutes.

Whether individuals and organizations have a license to discriminate against LGBTQ people when receiving taxpayer dollars to provide critical services.

Whether LGBTQ people and families can be turned away from businesses open to the general public, simply because of who they are or whom they love.

Whether qualified transgender people can be excluded from serving in the military, simply because of who they are.

Kavanaugh currently serves as a judge on the U.S. Court of Appeals for the District of Columbia Circuit. During his tenure, he has clearly established a judicial philosophy that the personal beliefs of individuals should dictate the lives of others. Kavanaugh has ruled that an employer's religious beliefs should be allowed to override their workers' access to birth control. While refusing to answer whether he believed Roe was correctly decided during his confirmation hearing for the DC Circuit, once on the bench he wrote that his colleagues had "badly erred" by determining that an undocumented immigrant teen should have access to an abortion. In dissenting against the Affordable Care Act, Kavanaugh claimed that "the President may decline to enforce a statute...when the President deems the statute unconstitutional, even if a court has held or would hold the statute constitutional."