DJ Karsten Sollors brings his unique sounds to Chicago and beyond 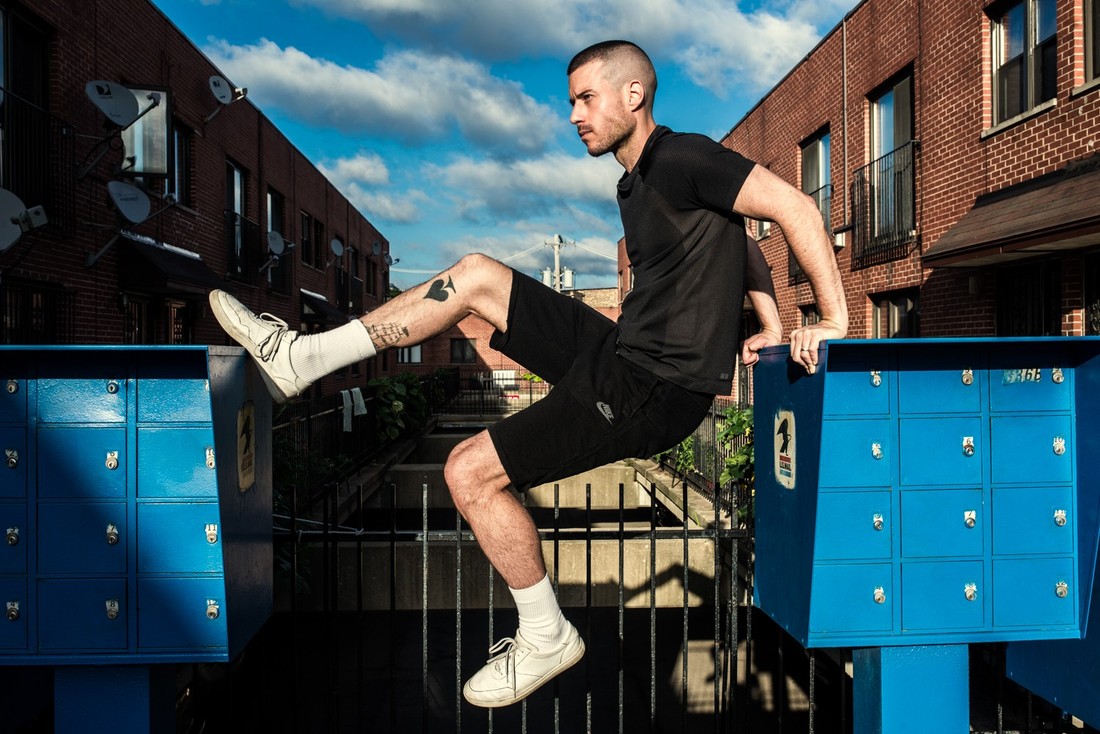 photo credit // dj karsten sollors
Karsten Sollors keeps expanding his music portfolio, which started as a DJ – as a hobby – in the late-1990s, and a professional DJ for seven years. He also has been producing his own music for four years.

Plus, he has signed to major music labels, such as Toolroom, Nervous, King Street Sounds and most recently Roger Sanchez Label Undr The Radr. And Sanchez has been playing Sollors' music in his sets, and on his radio show. "That's a dream," Sollors said.

Sollors, 34, who lives in Chicago's Lakeview East neighborhood, also did a guest mix on Sanchez' weekly show, 'Release Yourself.'

"Working alongside Gene Farris on Farris Wheel Recordings has been such an honor; it's truly a privilege to be part of that label, something I hold dear," to my heart, Sollors said. "Touring across North America and Asia, playing festivals like Spring Awakening, becoming a resident at world-renowned Sound-bar (in Chicago) and being given my own monthly radio spot on UK-based 'This Is Electric' (has been great). I also was chosen by 'Only the Beat' electronic music blog as '5 Chicago DJ's to watch 2018,' which was an honor in itself. It is also a huge rush for me when the music I make lands in the TOP100, which has happened with a lot of my releases this and last year."

Sollors, originally from Vancouver, B.C., has been living in Chicago for three years – and he's been married to Brian Rody for close to two years.

Sollors is a resident DJ at Sound-bar and often works with React Presents at The Mid, and Spring Awakening. He also regularly DJs for Circuit MOM Productions, as well as the Organized Grime events put on by Ryan Willing.

His DJ duties have taken him to New York, Toronto, Vancouver, Las Vegas and more. Earlier this year he played a show in Ho Chi Minh City, Vietnam.

"When I was an early teen, I was sent to a boarding school on an island in a remote part of Canada. I remember arriving, walking down the halls of my new home and noticing one of the older students had a pair of turntables," Sollors said. "I'd skip out on class sometimes when I knew nobody would be around to go and mess with the records. I had no idea what I was doing, but I loved the feeling. I ended up convincing my folks to get me a set of 1200 (turntables) and so I began collecting records. My mother was a flight attendant at the time and whenever she went to work she'd come home with new records for me, usually from the U.K. Right around the same time I discovered the rave scene. I remember going to my first party when I was 14 years-old and it completely changed the course of my life ...that was about 20 years ago.

"I started DJing because I loved the music, and I love the technical aspect of DJing. It wasn't until 15 years after starting as a hobby that I actually began DJing professionally."

For Sollors, the DJ is like the captain of a cruise ship.

"Driving the vibe of the night, and collaborating with the crowd to create the best possible outcome," Sollors said of his DJ life. "I like to do long mixes, meaning, I don't just mix from one song to the next quickly; I like to let the two tracks ride together to almost create a new song entirely. Taking sounds from one track, and mixing it with another, sometimes a third or fourth ...I do everything on the fly, which means I never really know what I'm going to play or how I will play it until I'm up on the decks DJing. I'm constantly updating my music collection, so I'm staying current with the music that is coming out, and always have on hand at every show, each track I have ever played. It doesn't have the same charm as picking through a box of records, however it makes the 'on the fly' creation process much easier and more streamlined."

Being a DJ also means sharing, he said ...sharing music that he has written, or found, and creating a bond with the crowd to further build energy in the room.

"I also love the technical aspect of (being a DJ), twisting nobs and playing with buttons somehow really gets me. Having people come up to me after I've played a set, and sharing with me their positive experience really makes me feel good as well," he said. "I get to do what I love (as a DJ). I started DJing in my bedroom because I loved the music, I loved collecting records and then naturally sharing. I still get surprised sometimes when I get the paycheck at the end of the night because it's such a pleasure for me to do what I do."

The negatives of life as a DJ include crazy sleep patterns, or lack thereof.

But the positives memories and more far out-weigh any negatives.

Last year, for instance, Roger Sanchez was in town playing a show – and Sollors wanted to share some of his music with Sanchez. "He played an amazing set that night at Primary Nightclub. At the end of the night, I made my way into the DJ booth, introduced myself and passed him a bunch of my original productions to him on a USB key," Sollors said.

Fast-forward a month. Sollors got a message, congratulating him that his music was being played on Roger Sanchez' radio show. "I couldn't believe it; I was in shock," Sollors said. "I was so excited, so I checked it out and, sure enough, he introduced the track and mentioned my name. I was over the moon (with joy), so I tracked down his email and wrote to thank him. I mentioned to him that it wasn't released or signed to any record labels yet. He said he wanted to release it on his label, and that I could send him a few more to make it a four-track EP. It was such a cool set of events."

The EP officially came out in April 2018, and the track 'Give A Little' which was the original song he had played on his show, climbed all the way up the charts to No16 on the tech house top100.

"I have been so fortunate to play so many amazing events that it's quite hard to pin point 1 favorite," over the years, Sollors said. "Anytime I can feel the crowd is with me, and we all are feeling the magic of the night, (stands out). Whenever I get to open for, or play in support of guys who've come before me who I look up to is always special. I like getting a chance to connect with them through music."

And sometimes it's at ...strange hours. For instance, this spring he was set to play an after-hours event from 6-8a.m., and at around 8:05, they kicked everyone out – but asked (Sollors) if he wanted to play longer. He obliged and ended up playing another hour just to the staff. "Everyone was smiling and feeling great, it was pretty special. I live for moments like that," he said.

Sollors has a lengthy list of DJs who he admires, including Roger Sanchez, Gene Farris, Chus and Ceballos, Mark Knight, Moby, Frankie Bones, Chris Leibing, John Digweed and more. He enjoys their "technical skill, performance styles, music productions and also the way they've all navigated an amazing career in music for so many years. It's super surreal and truly an honor to now be working alongside a lot of them."

Sollors is well aware, and respectful of, Chicago's rich music history, particularly house music. "It started in the queer community, so naturally it has some magic," he said. "I have been very fortunate to connect with some really wonderful LGBT promoters who have given me a platform to share my music."

And if he wasn't a DJ, Sollors said he likely would be working as a model in Europe, or maybe manning a vegan bakery.

Hobbies: "I spend a lot of time in the studio making music, and when I'm not DJing, I love to go out and support my friends' shows. I'm an electronic music fanatic, so the line between work and play is pretty blurred. I also love cooking; for me, (cooking) is an art." He also enjoys working out, biking, skateboarding and snowboarding.

Dream Vacation Destination: Ibiza – "I've been there many times, and it's still a dream. I've never been to the Maldives, so I'd love to spend some time there. This past winter we took a month and went to Dubai, Thailand, Vietnam and Cambodia; that was such a thrilling experience."

Favorite Chicago Restaurant: "Initially my favorite was Bavette's (Steakhouse), particularly for its old-world ambiance, but now I find myself loving Bad Hunter, mostly because of the plant-based meal options."

Little-known Facts: "I spent three months living with a family of shamans deep in the jungle of Peru ...I modelled for Dolce and Gabbana, Vivienne Westwood and Prada in Milan; and shot a Uniqlo worldwide campaign before I was working as a DJ full-time."

LGBT Community: "I DJ at many Pride festivals around North America, and with my music, I try to bring people together. On any given day or night while I'm DJing, the type of music I play is universally understood and has the power to heal and uplift. I do my best to incorporate that energy into my music."

Finding Love: Sollors and Rody met ...on Facebook. "(We) were immediately enamored with each other. I had been living in Vancouver, Canada and Brian in Chicago. After three months of constant Skype/FaceTime, we both flew to Sedona, Arizona to spend a week together. After that, we visited each other every two weeks until I moved to Chicago six months later. That was 3 years ago"

Marriage: Sollors and Rody were married Sept. 25, 2016, in a small area of Lincoln Park called The Alfred Caldwell Lily Pool. It was a small ceremony, (with only) 40 people – close friends and family. It was a special moment in time."

Here is his upcoming schedule: