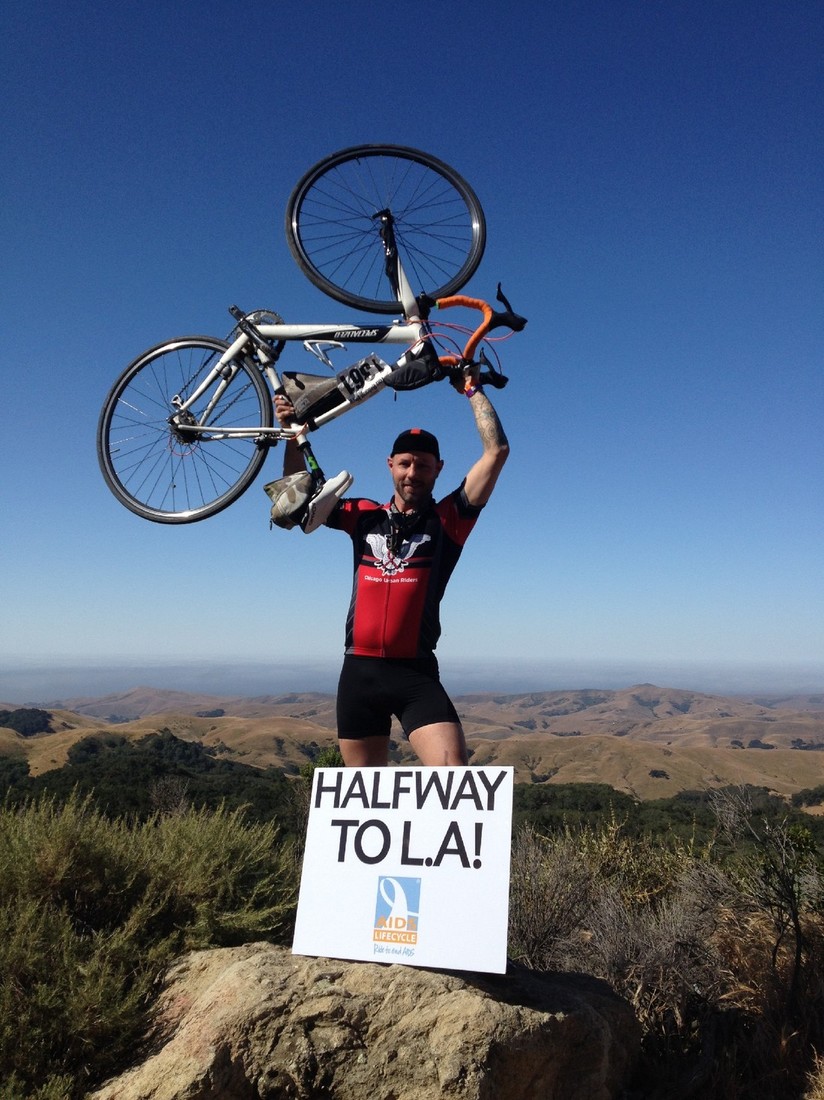 Emotions will be high, pride plentiful as cyclists ride from San Francisco to Los Angeles

Keith Andrew Stryker tackled the AIDS/LifeCycle for the first time in 2012, where he was among 2,225 riders and 550 roadies for the 7-day bicycle ride from San Francisco to Los Angeles.

Stryker's dad, Roy, meanwhile, drove his motorcycle from Phoenix to meet Keith at one of the final stops in Southern California.

"I had not told my dad that I was HIV-positive, but decided I was going to tell him that night at camp," Stryker said. But, Stryker was admittedly, "a nervous wreck" knowing what he was about to reveal and not truly knowing what his dad's reaction would be. Keith cried for the last 10 miles that day.

That night, Keith told his dad that he was HIV-positive. Roy responded with compassion and support. And later that night, the two went together to the candlelight vigil on the beach to honor and memorialize those who have passed from HIV and AIDS.

Stryker, 43, who lives in Chicago's Edgewater neighborhood and is a bartender at Replay in Lakeview, was back in the annual 545-mile AIDS LifeCycle again in 2013 and 2014, and in both years Roy drove over from Arizona, along with Keith's step-mom, Carla.

Stryker's mom, Marge Mayo, has been very supportive as well and participated as a roadie for the Ride For AIDS Chicago in 2014.

Stryker is once again training for the grueling, emotional journey this June – with a heavy heart, though.

His dad passed away this past October.

Keith is riding in the 2016 AIDS LifeCycle in Roy's honor.

"This (event) is my opportunity to give back to amazing organizations that helped me when I first tested positive in 2003. It's how I can be a part of helping this current and future generations have access to health care organizations for prevention options and testing and for the continued care that is needed when someone is diagnosed with HIV," said Stryker, in his fifth year doing endurance bicycle rides to help fight HIV. This will be his fourth AIDS/LifeCycle.

And each is always emotional, with more memories that miles peddled. So that means Stryker will, once again, encounter:

Dancing bears at the Otter Pop stop on Day 2.

An amazing BBQ that the town and kids of Bradley throws on Day 3.

The Evil Twins, as the mountains are known, on Day 4.

The creativity of Red Dress Day costumes on Day 5.

The candlelight vigil on the beach at the end of Day 6.

The closing ceremonies on Day 7.

And then there's the Love Bubble.

"Being around some of the most beautiful people for seven days and nights, meeting people from all over the world who will be continue to a part of your life long after the ride" ... that's the Love Bubble, Stryker said. "There's this enveloping positive energy that takes over the entire week. Even in those moments when you don't feel like you can make it up the mountain, you can't escape the dozens of people cheering you on, telling you that you can do it. It's unlike anything I've ever been a part of. The only thing that rivals this bubble of loving energy, would be the stunning California scenery. It's one thing to see the California coast from a car, but nothing compares to biking through wine country, seeing strawberry fields going on and on, breathing in the fresh ocean air mixed with the smell of eucalyptus, seeing an eagle soaring above cliffs dropping off into the crashing waves. It's magical."

But there are bad parts, too. Well, maybe just annoying. Such as, waking up at 4 a.m., after a rough night of sleep in a tent that might be sitting over half a dozen gopher holes.

Stryker is one of many Chicagoans participating in the annual AIDS/LifeCycle. In fact, Stryker is the team captain for Team CÜR, which stands for 'Chicago Urban Riders' and is a play on the word CURE, he said. "We use the umlaut (above the U) to convey this (message), Stryker said. "Jorge Partida, my fellow team captain and one of my best friends, came up with the name four years ago when we started the team for (the annual) Ride For AIDS Chicago, (RFAC)."

Team CÜR rode the 200-mile RFAC for three years and this will be the group's second year doing the AIDS/LifeCycle.

This year, there are 18 riders, ranging in age from their 20s to their 50s participating in the AIDS/LifeCycle on Team CÜR. Most are seasoned riders, or at least have done ALC once previously.

Seven Team CÜR members are rookies to the California ride, including Keith's brother, Jon, who is married with children and living in Phoenix. Keith said his sister-in-law, Rachel, and nieces will be their personal cheerleading squad as Team CÜR bikes down the California coast.

Riding for a Cause

Team CÜR has several fundraisers before the group heads west for its ride. For instance, there was a St. Patty's Day Fundraiser at Bear Den at Big Chicks on March 17.

AIDS/LifeCycle raises funds for the LA Gay and Lesbian Center and for the San Francisco AIDS Foundation which, while doing work locally to fight HIV with education, prevention and treatment, also support national and international research on the treatment and prevention of HIV/AIDS.

Here is a list of all Team CÜR members: