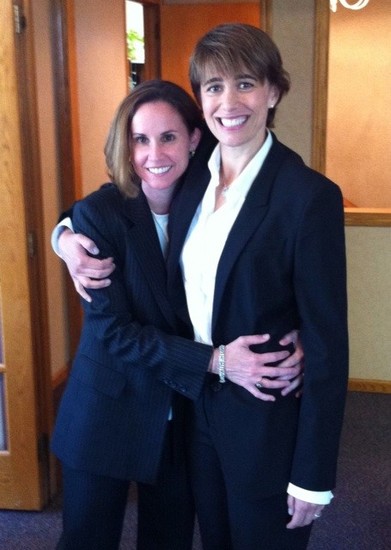 "Our relationship deserves marriage," Mell told the Chicago Sun-Times. "That's how I feel about it. I mean there was a time in our relationship where it just wasn't right to call Christin my ‘partner' or my ‘friend' . . . or even my ‘civil-unionized partner.' You know she's my wife. . . . We deserve those titles, those rights."

Illinois lawmakers, including Mell, passed the Illinois Religious Freedom Protection and Civil Unions Act in December. Gov. Pat Quinn signed it into law in January and it took effect on June 1.

Mell asked Baker to marry her during dinner at the Signature Room in the John Hancock Center on April 10th. She had the engagement ring on the creme brulee.

One of three openly-gay state lawmakers, Mell announced her engagement on the Illinois House floor on April 28.

"The reaction was great. My co-workers were wonderful," she told ChicagoPride.com at that time.

Baker is an Arts and Humanities Specialist with the YMCA. She graduated from Middle Tennessee State University with a BFA in mass communications and English lit in 1997.

Mell has been out for years. She was arrested in 2002 for striking an officer during a gay marriage protest in the Loop, but she was acquitted.