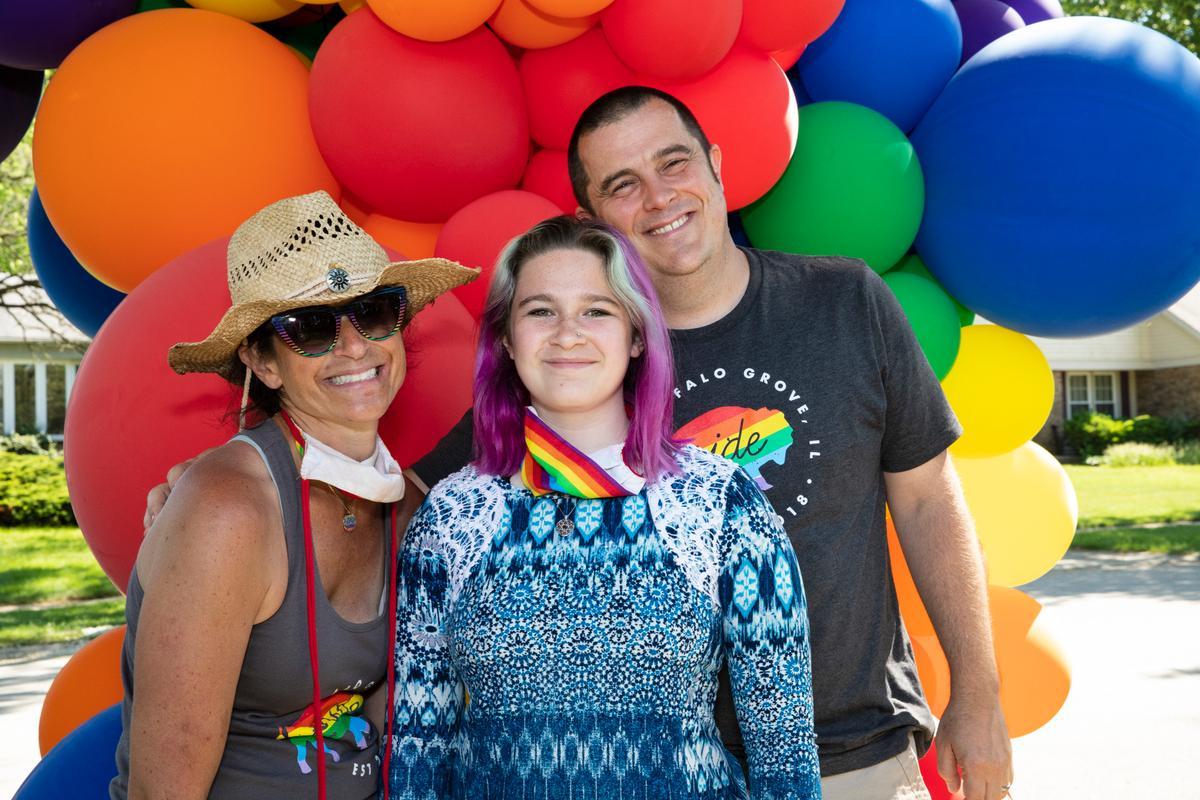 photo credit // annette leibovitz
Organizers for the 2nd Buffalo Grove Pride Drive on June 6 are expecting about 200 participating community families – about double the number that filled the northwest suburb in 2020 with a successful sea of rainbows.

And that’s just the start of a large Pride campaign this year from The Pinta Pride Project, organizers for everything LGBTQ-focused in BG.

Buffalo Grove resident Carolyn Pinta – whose teen daughter Molly spearheaded the push to hold the inaugural Buffalo Grove Pride Parade in 2019 – has asked the village to issue a proclamation for Pride Month on June 1 and for the Pride flag to fly under the American flag at the village hall for the month of June.

Pinta’s request came earlier this month at a village board meeting, and it follows her successful effort to get Lake County to fly the flag at the government offices in Waukegan in June, according to the Daily Herald.

“I’m sure that a proclamation will not be an issue, but I understand the difficulties of flying the flag,” Pinta told the Daily Herald. “Why should the Pride flag fly in June, but a flag for breast cancer awareness not fly in October? Or a flag to honor our police officers in January around National Law Enforcement Appreciation Day?

“The Pride flag should not be the only flag to fly, and any organization should have the right to request the village board to vote on the flying of a flag.”

Village president Beverly Sussman said she would refer the matter to village staff and counsel, according to the Daily Herald.

The Pinta Pride Project also this year is beginning to spotlight some of its 3,500 supporters – not just Molly, now a student at Stevenson High School.

“The mission of our nonprofit, The Pinta Pride Project, is to highlight, celebrate and normalize the LGBTQIA+ community in the northwest suburbs and the campaign to introduce members and families involved with our project does just that,” Pinta said. “We began on New Year’s Day and have highlighted (many) individuals and families so far. We hope to (spotlight more than) 100 this year.

“The whole idea is for folks to meet others they may know who are either LGBTQIA, parents or family members of LGBTQIA and fierce allies.”

For instance, The Pinta Pride Project spotlighted Allison Frank, 17, the founder of the BeYouTiful Initiative, (thebeyoutifulinitiative.org), a youth leader at The Kenneth Young Center. “Allison is out to change the world. We are so proud to present her as our first Face of BG Pride,” Pinta said.

Frank said: “I heard about BG Pride when the first fundraising efforts began, and when Molly posted her coming-out video. I wasn’t out the first year of BG Pride, so unfortunately, I did not attend any events as I wasn’t yet comfortable with myself, but ever since I came out, I’ve attended every single event. I was also a vendor at the 2020 Pride Drive, (selling) pride canvases.

“I think Pride events on any scale are important because it’s important as LGBTQ people to know that you are accepted and welcomed in your community. I think large Pride events are all the better, the more people who show up, the more you know you’re accepted. I think Pride events are great ways to get the community involved in celebrations of equality and kindness. Local Pride events, in my case at least, were essential in my journey of being able to accept myself for who I am. When I first realized I might be gay, I had no resources, nothing in the community that I knew of, and what seemed like no one to turn to for help figuring out all the complex things that come with figuring out your identity.”

Trevor Neff, aka, Miss Flo NoMo’ is a 35-year-old gay man who supports BG Pride from Peoria. “He is an amazing fundraiser for the community and spreads such a positive message to youth,” Pinta said.

Neff is the Community Impact Director for Neighborhood House of Peoria and has been the chairman for River City Pride in 2019 and 2020.  He is the current president of Peoria Proud, an organization that encourages and supports diversity and equality throughout the Peoria metropolitan area.  The coalition seeks to unify the community through advocacy, education and social outreach.  Neff also sits on the board for the Network of Volunteer Administrators.

In addition, Neff, er, Miss Flo NoMo’ was the top drag queen in a nationwide contest that raised money for The Dru Project through virtual drag shows, auctions, and Convos with Flo.

The Dru Project is an LGBTQ+ advocacy organization on a mission to spread love across the nation and promote gay-straight alliances.

“Pride events are important because (they) allow everyone to feel the love of the community,” Neff said. “Not everyone has the support and love they need when it’s needed but being able to gather with others who have or are going through the same thing is important. Create new friends, build new families, spread the love.”

The Pinta Pride Project will continue to spotlight locals from its social media group of more than 3,500.

This year’s 3-hour Pride Drive, starting at noon, will again feature DJs, drag queens, giveaways along the route and more – much, much more than the successful 2020 version.

What about a parade?

“We are not advertising heavily yet but knowing that teens and children will not yet be vaccinated (from COVID-19), it would not be inclusive of all to hold a parade,” Pinta said.

“Molly was the little girl with the dream, and she was the inspiration behind the first parade. BG Pride has turned into so much more. BG Pride has become a place where folks can learn, grow and support in so many ways, from parents of kiddos who have just come out, to elderly gay couples who are beautiful role-models.”