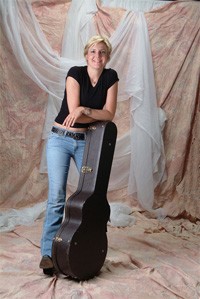 I had a chance to catch up with LA singer/songwriter Sean Wiggins as she packs her bags and gets ready to travel the globe as she does satisfying her legions of fans.

In fact, she’s headed back to Chicago for one show only as part of a Chix Mix “Plugged In” Production.

She’ll be on a double bill with local artist Reyna Larson for what will promise to be a EXCELLENT night of kick ass rock, blues, pop and downright fantastic of music if you are into woman with great voices (and frankly, who’s not!).

Here’s a look into the mind of Sean Wiggins…hold on!

KS: Finally, you are coming back to Chicago! What have you been doing since we last saw you?

SW: I played Washington, DC Pride & San Fran Pride. Plus I have been getting airplay on Sirius OUTQ, out of New York. Of course I am playing all over Southern California with my new band! I am having a blast!

KS: You've been compared to a lot of different singers,but who would you compare yourself to?

SW: Gosh I don't like to compare myself to anyone. I think I sound a lot like Sean Wiggins.

KS: Who or what was or is currently your biggest musically influence?

KS: People in Chicago love you, but lets say someone hasn't seen you live yet and they are coming out Sept 30 how would you describe your music?

SW: Well, I would call it acoustic rock with some country, some blues and some folk in it. MY new guitar player is coming and he is very old school - kinda Stevie Ray Vaughn like or Alman Brothers.

KS: I hear you are bringing Paul Houston your guitarist with you to Chicago, how will that change the show if at all?

SW: Well, he adds a bunch of hooks to my music and let's me relax a little because he is playing guitar. I can relax and focus on performing and singing my ass off... Plus his solos ROCK!!!!! Should be fun!

KS: You have a lot of interactions with your fans at your shows, is this something you plan on or does it just happen?

SW: It just happens. I like to interact with people because I want them to have fun!!! If we better understand each other, I think more fun can be had - tee hee.

SW: I should be going into the studio by the end of this year to re-make a few tunes and record the new ones with the new band! I am so excited!

KS: Who's CD would I find in your CD player right now?

KS: If you could do a duet with anyone who would it be?

KS: If you were stuck in an elevator and you could pick on famous person to be stuck with, who would it be and why?

SW: Katherine Hepburn - but that would be hard now.. So - let's say Bonnie Raitt - I just admire her for so many reasons. She never gave up and has always been true to her own style and her own music. I admire that!

...have the same song playing in your head forever or say "like" before every sentence?

Know it all I guess.

be invisible or be able to fly?

Fly all the way!

...be a dog named Killer or a cat named Fluffy?

Killer all the way - no fluff here

...be stranded on a desert island alone or with someone you hate?

Event Details or get more info at www.ChixMixProductions.com.