Jason Narducy is the hardest working man in rock

I have always had good relationships, strong friendships, with gay and lesbian people. So I would guess that, since my music is an extension of who I am, there might be a connection through the songs. 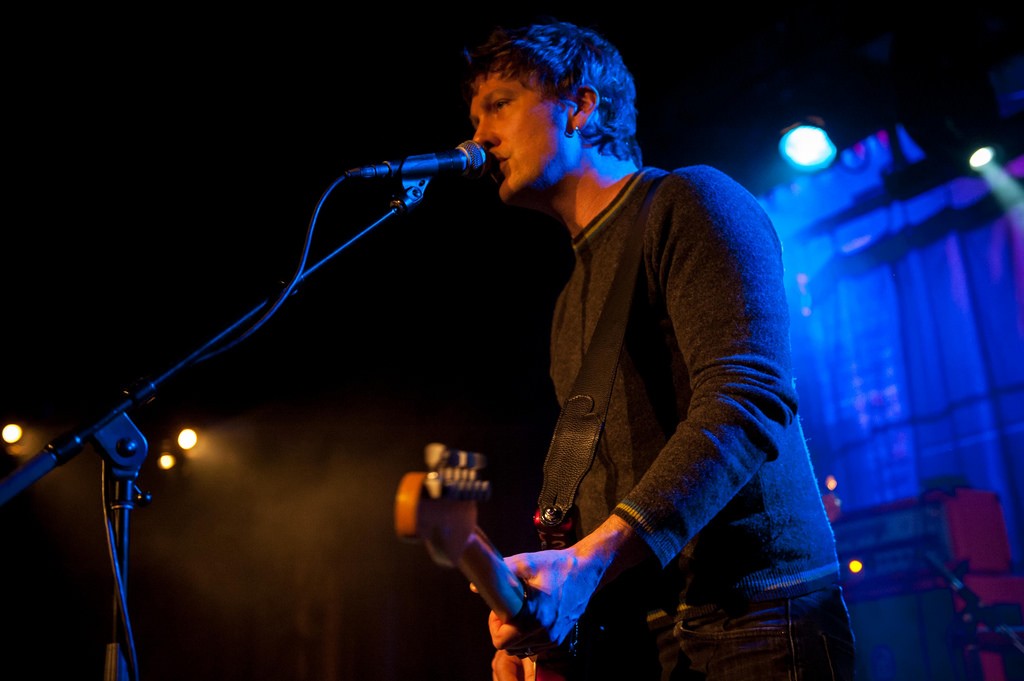 Straight ally Jason Narducy is a one-man walking history of local and national rock music. As a child of ten, he played in the influential Chicago-based punk band Verboten. Since that time, Narducy has been involved in the bands Jason & Alison and Verbow (both with Alison Chesley), as well as been an in-demand touring member of bands led by Robert Pollard (of Guided By Voices), gay alt-rock icon Bob Mould (of Husker Du) and many others. Narducy’s latest project, Split Single, has released one studio CD titled Fragmented World and has a live EP due for release in late April. They will be performing in concert on May 1 at Schuba's in Chicago. I spoke with Narducy in advance of the Split Single show.

Gregg Shapiro: Beginning with Verboten, you’ve been in rock bands since you were a child. What advice would you give to a child who wants to be in a rock band?

Jason Narducy: I think nowadays there are so many more resources for young people to be in a rock band, such as School of Rock in many major cities. It was sort of hard, back in the day, to find different musicians to play with. Verboten was fortunate in that we were all fans of punk rock. You could sort of tell who liked punk rock based on their t-shirts. I guess that’s still the way people find their clan. Honestly, I don’t know how adult musicians find each other to form bands. It’s difficult to find people you feel comfortable to collaborate with and who have the same taste in music and who have schedules that allow for practice and then to even find a place to practice. (Even) to be able to afford strings [laughs]. Anytime a band gets all of that happening is impressive to me.

GS: You are one of the interview subjects in the Chicago segment of HBO’s Foo Fighters: Sonic Highways program. What was it like to be featured so prominently and what does it mean to you to know that your band Verboten was an inspiration to Dave Grohl (of Foo Fighters)?

JN: I had no idea and I had nothing to do with how much of my interview ended up in the final cut. I can tell you that I hadn’t seen it until it first broadcast and I was shocked [laughs]. I did that interview with Dave last January and we talked for about 90 minutes. I honestly couldn’t remember what we talked about [laughs]; general ideas. It was sort of like we were talking for the first time because it had been so long. It’s an honor. Within an hour, Dave did a really good job of presenting a love letter to the city of Chicago, the music of the city of Chicago, as it pertains to his and the band-members’ relationship with the city. It just so happened that Dave and I met when we were kids. There’s this weird story about this punk rock band (Verboten) that I started when I was ten years old that was playing Chicago clubs and his cousin (Tracy) was the singer. It’s a very strange turn of events. We lost touch. I had no idea while he was in Nirvana that the drummer was Tracy’s cousin as we had lost touch. It wasn’t until Dave did an interview with Greg Kot of the Chicago Tribune in 1995, around the time of the first Foo Fighters tour, that he talked about my band. I remember sitting at my kitchen table reading the article going “What?” [laughs]. I drive down to the Riviera (Theater in Chicago) and, because I knew the tour manager, got to talk to him again. It was already strange that I had a band when I was that young; it’s even stranger that it inspired a guy that so many people are familiar with.

GS: Did the name of your former band Verbow, which featured you and Alison Chesley, derive from Verboten, with, say the bow from Alison’s cello added for good measure?

JN: I think I didn’t catch the Verboten reference at all. That was something that was maybe deep in my cranium and I wasn’t recognizing it because people do bring it up, how similar they are. It was definitely a reference to the cello. The Spanish word verbo means to take action. We added the w as a tip of the hat to the fact that we were a rock band that had strings in it. We were called Skinny before that. We thought that was a great name. At the time – and Alison still is – we were both incredibly skinny, pale, white people. We thought it was a funny, goofy name, but it was already taken. We had very little time to come up with a band name, so we decided to create our own word [laughs], which had its challenges for sure. It didn’t help that at the time there were other bands with names such as Verbena, and other v-e-r words that we got confused with.

GS: Over the years, you have earned a reputation as an in-demand session and touring musician, joining a multitude of bands including out indie-rock legend Bob Mould’s and Superchunk. Would it be fair to say that you play well with others?

JN: I try to. It’s definitely a goal of mine. I think it’s helped that I’ve played so many different roles in so many bands. Certainly after being the front man for Verbow and doing three record cycles – including the Jason & Alison records, where I wrote the songs, we recorded them and toured for them – when you’re the front man for a band you recognize what you appreciate in other band members. When I got the call, whether it was for Bob Pollard or Liz Phair or Bob Mould or Superchunk, any band, my goal is to be a good team player and supportive of the wishes of the leader of the band. I think even more so than the playing, actually.

JN: There are plenty of people who are better players than I am. I mean, I’m not even a bassist. I’m a guitarist and I’m finding my way through the bass and I think I’m doing OK. It’s more like the other 23 hours of the day. You’re touring together, you’re traveling, you’re flying, you’re driving, you’re staying in hotels, you’re sitting in the backstage area. It’s important for me to be a positive energy to a group of people that is, honestly, already going through some intense situations every day. They’re great situations. I mean, who doesn’t want to be in a rock band? It’s the best job ever! It can be grueling and tiring. People want different things from you. My goal is to be a really good band member and hopefully I’m batting 700 or something.

GS: Bob Mould is something of an enigma in the queer community as he is an out, gay man who got his start as a musician in the world of alternate rock, as opposed to pop or dance music. Was he the first openly gay musician that you have performed and toured with?

JN: There are quite a few gay men from the punk rock scene but Bob Mould may be the most well-known.

GS: Do you have a sense that there is spillover from Bob’s LGBT following into Split Single’s fans, and if so, what would that mean to you?

JN: There are folks that have been introduced to my music through my work with Bob. I don't always know if they are LGBT, honestly. I have always had good relationships, strong friendships, with gay and lesbian people and so I would guess that, since my music is an extension of who I am, there might be a connection through the songs. I'm more comfortable amongst diverse groups, which is why I live in Evanston and why I don't go to Lollapalooza [laughs].

GS: Your latest personal music project is Split Single. What is the genesis of the name?

JN: It wasn’t taken [laughs]. The whole idea of the band is that I would write and play the songs with other musicians. It’s my vision for the music, but it’s collaborative as far as presenting the songs. I like that split singles were also a collaboration, a way for two different bands to share an audience and present ideas together, so it ties in with the concept for the band. I do like the alliteration. There was also a split single engine that was used in World War I or something, and maybe it’s still used for motorcycles; I’m not well-versed in that. I like that it was an engine as well as a 45 RPM.

GS: Do you consider Split Single, and the Fragmented World disc, to be a solo project with you performing under a different name or is it a band?

JN: It’s absolutely a solo project. All of the shows I’ve played, except for one, have been with the same drummer. I guess by definition it’s not a band. It’s a solo project with a band name.

GS: Do you think at some point there will be a Jason Narducy album?

JN: It’s a tough last name [laughs]. It’s good for (internet) searches, because there aren’t many of us, but that’s about it.

GS: Your stock amongst your LGBT friends and fans recently soared after your “pizza adventure” in Walkerton, Indiana. What can you tell me about it?

JN: Split Single was on tour when the story broke about a pizza restaurant (Memories Pizza) in Indiana refusing to serve same sex events based on their "religious freedom." Indiana Governor Pence had just passed legislation allowing this nonsense. I looked at the map and noticed that Walkerton, Indiana, where this place was located, was on the way to our next show that night. So I asked (band-mates) Neil and Tim if they wouldn't mind stopping and maybe taking a picture outside the restaurant. They were into it. When we arrived, there were a handful of news teams stationed on the block with their cameras set up. We took the picture and then looked up other pizza places in Walkerton. There was only one: Casey's. It's a small town. We walked into Casey's and asked if they discriminate against any customers as they are permitted to under Governor Pence's law. The woman working there emphatically said no and that she didn't vote for him either!  So I ordered $100 of Casey's pizza and we brought it back to Memories Pizza. Tim suggested that we eat the pizza on the sidewalk naked, holding hands. I think he would have actually done that. Instead, I asked the members of the media and the protesters gathering outside if they wanted some "non-discriminating pizza" for free. They accepted. Everyone was smiling. Non-discriminatory pizza tastes great [laughs]. I posted pictures on my twitter and it sort of blew up. Especially after Margaret Cho re-Tweeted it. Then Salon and CNN did stories about our pizza party. It was probably the best pizza party I've ever been to [laughs].