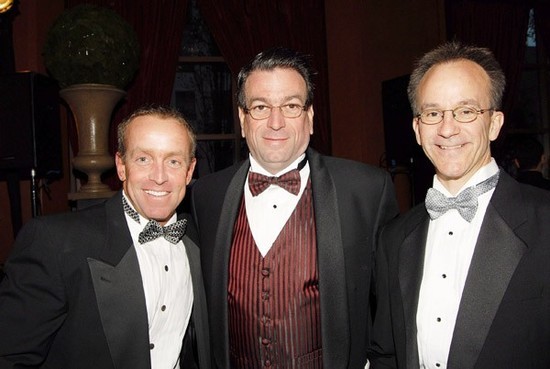 Before their November 11th inaugural Speaker Series featuring President Bill Clinton, Chicago House CEO Stan Sloan takes a moment with ChicagoPride.com's Brian Decker to chat about the founding of Chicago House, the Sweet Miss Giving's bakery job program one year later, and a deep dark secret that you may not already know about this fascinating community leader.

CP: (ChicagoPride.com) Chicago House was founded in 1985. While the initial reason for the founding of Chicago House was to provide housing and supportive services for people with HIV and AIDS, were there any specific events or instances that led to its creation?

SS: (Rev. Stan Sloan) People were being kicked out of their homes and had nowhere to go to die with a sense of dignity. We answered that need.

CP: What were some of the first programs offered?

SS: We were really about end of life care in those days. It is a sharp contrast to our mission today, which have expanded to include community case management, substance abuse counseling, HIV prevention, free HIV testing, medical adherence, and the city and region's FIRST employment training and placement program for people with HIV.

CP: Did you ever envision that we would still be fighting for funding and services for those afflicted by HIV/AIDS a quarter of a century later, in 2009?

SS: Our tag line is "there at the beginning... here until the cure." We didn't expect we would be here, but we will continue to be here as long as there is a need.

CP: To date, Chicago House has served over one thousand homeless Chicagoans living with HIV and has continuously evolved to meet the changing realities of the disease. Today, thanks to medications that help people live longer lives, the agency helps men, women, and children affected by AIDS build lives of health and hope. Chicago House serves families and individuals who never had homes, jobs, or the support of their families, even before being diagnosed with AIDS.

In October of last year, you founded Sweet Miss Giving's, a bakery and jobs program with a social mission that provides job skills and employment for formerly homeless individuals who have been assisted by Chicago House. In addition, over 50% of all profits go to help the formerly homeless and HIV/AIDS-affected men, women, and children of Chicago House.

CP: Can you share one of your favorite Sweet Miss Giving's success stories over the past year?

SS: One of our interns became a full time staff member after he completed the training and internship program. He had not worked in over a decade. Today he is supervising our overnight shift and doing incredible work. At first people were afraid that the hectic pace of a bakery would be difficult on their health. It has proven just the opposite. The increased purpose in life has resulted in even better health and happiness for our interns.

CP: As the holidays approach and baked treats begin to share a more memorable role in our meals, are things getting busier for Sweet Miss Giving's where the frenetic pace of this time of year allows you to help even more people through greater workloads?

SS: Yes. Our sales were $23,000 in August and jumped to $36,000 in September. We anticipate that growth continuing through the holidays, providing more opportunities for employment and more funding for Chicago House's programs.

CP: I hear there will soon be a Sweet Misgivings retail location. Where will it be located and how soon until it is opened?

SS: Our first retail site is going to be in the Ogilvie Transpiration Center, set to open on November 12th. We hope to open in some Park District locations in the new year, avoiding the overhead of a stand alone retail location...

CP: So many of the people that you serve are not only afflicted by HIV/AIDS, but are also homeless. Chicago House has been able to transition many individuals off of the street and into more stable and healthy lives. In a little more than 2 weeks you will have one of the most recognizable men in the world, former President Bill Clinton, speaking on just that topic – homelessness and AIDS.

Why did you decide to shift gears from an annual gala to create a more educational fundraising program - is this due to changing attitudes and expectations?

SS: The annual Speaker Series Luncheon is a way of Chicago House staying ahead of the times and trying to find better solutions. Our hope is to move from a Black Tie where people have a good time but learn little about how to help with HIV/AIDS and Homelessness to an event that educates others and inspires them to help stem the tide of HIV/AIDS and homelessness.

CP: Often, keynote speakers are simply "preaching to the choir" so to speak, what message would you like people to take away from this lunch?

SS: That everyone, by living his or her life in ways that consider the plight of others, can make a difference in major social issues.

CP: Let's talk a bit about Stan Sloan. Most know you as Rev. Stan Sloan, have you always been a priest or did you make other career choices earlier?

SS: I worked for Whirlpool Corporation at their headquarters in Michigan directly out of college. I enjoyed my job but felt like something was missing. I entered seminary a year later, and after ordination served in parishes in Oklahoma before affiliating with the Episcopal Diocese of Chicago in 1995. Since that time I served as the pastor of a parish in Roseland for a brief time, but the bulk of my work has been working in social services with ex offenders, the homeless, and those who are affected by poverty and HIV/AIDS.

CP: Where are you from originally and how long have you lived in Chicago?

SS: I grew up in Amarillo Texas and went to undergrad at Oklahoma State University (go Pokes!). I originally came to the Chicago area to attend seminary from 1987-19991, and I have been back "home" here now since 1995.

CP: Chicago is a great place to live and work, what do you enjoy most about the city?

SS: I love almost everything about Chicago, but I think the city's greatest charm lies in the diverse neighborhoods and in the restaurants and cultural aspects that characterize those neighborhoods.

CP: You are a well-known member of the community, but tell us one thing that most people do not know about you.

SS: I wake up every night about midnight for a snack. Every year I swear I am going to give it up, but I just can't...

CP: Stan, thank you very much for taking time out of an overflowing schedule to chat with ChicagoPride.com. We appreciate your time and dedication to making a difference in our community! We'll see you on November 11th.

Tickets to the Speaker Series Luncheon, featuring Pres. Bill Clinton on November 11th at the Palmer House Hilton are available by going to: http://www.speakerserieschicago.org

More information about Chicago House and Sweet Miss Giving's can be found at their respective websites at http://www.chicagohouse.org and http://www.sweetmissgivings.com