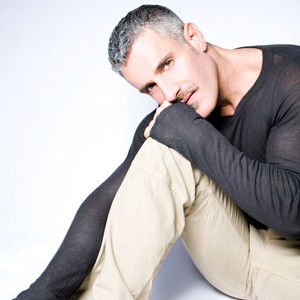 Ford has recorded a collection of songs that sound, at once wholly familiar and wonderfully fresh. Musically, Under the Covers spans myriad genres and multiple decades. At 32-years-old, Fleetwood Mac’s “Dreams” (re-imagined here as an interlude) is the oldest song in the collection. It is seamlessly situated between R.E.M.’s alternative rock hit “Losing My Religion” and Babyface’s R&B charttopper “It’s no Crime.” Elsewhere, Ford takes on Britney Spears’ “Trouble,” Sade’s “By Your Side,” Alicia Keys’ “No One” and Nirvana’s “Lithium.”

Ford’s lifelong fondness for words and melodies led him to begin a career in music while still in college, working as a performer in dinner theater revues. By the late-’80s, Ford had signed a production deal with the company co-owned by hit-making songwriter Denise Rich. In the early-’90s, Ford was confirmed to be the featured male vocalist on Frankie Knuckles’ second studio album, 1995’s Welcome to the Real World. In the end, conflicts at the label (Virgin Records) prevented this from happening. Virgin then offered Ford a solo deal, but the album never saw the light of day.

Here, the singer talks to GoPride.com about the joys of song, the virtues of the flesh, and the thick skin that comes from being a gay icon.

Q: How did you end up choosing the songs for UNDER THE COVERS?

CF: (Colton Ford) I had a couple of ideas going into it, and my manager, Bill Coleman, fed me a lot of great songs, some of which I was familiar with and some not. But they all spoke to me. Working with songs that were not part of my musical background enabled me to get in there and bring my own musical stylings to them.

Q: Why did you choose to record covers instead of original songs this time out?

CF: People have an immediate familiarity and connection with these songs, yet, I’m able to bring a different character with my voice that people wouldn’t expect. It’s a nice way for people to become more familiar with me as a singer and to bring my music to a broader audience.

Q: Was it ever daunting covering classic songs by artists like R.E.M., Nirvana, and Sade?

CF: No, I didn’t feel any pressure. As long as I feel a song, I’m going to go in there and do my own thing. I love the way “Losing My Religion” turned out---I throw in some ad libs, some riffs, and a little bit of church and make it my own. I actually got a very nice email from Michael Stipe saying how flattered he was and how much he liked my version of the song.

Q: The video for “Losing My Religion” is anguished but still very sexy.

CF: My last video was a big production with dancers and a lot of different setups. I wanted to go back to the basics with this one. There’s a lot of conflict in the song. What’s being conveyed is that someone is exposing himself. We wanted to do that literally and figuratively, so you see me both armored up in this futuristic look with my eyes covered, and then you see me exposed and naked—well almost.

Q: And in between, you have that striking black mesh outfit on—it’s halfway between covered up and naked.

CF: Yeah, that’s my Black Party outfit [laughs]. I’m joking--it’s definitely not a Black Party outfit, although I did see a couple of people wearing the same outfit at the Black Party this year, so what do I know? Both that outfit and the metallic one where given to me by David Mason of slickitup.com. They really do up these great fantasy type outfits, so if you want to get your sexy superhero fantasy groove on, you know where to go. Hey, at 46, I'm not sure how much longer I'm going to be able to pull off something like that, so I better take advantage of it now!

Q: Do you think that gay male singers have to show off their bodies to get attention for their music?

Q: Well, I think many people probably have an ambivalent relationship with pornography. Maybe they protect themselves from their shame by denigrating you.

Q: Well, you didn’t just come out of the woodwork as a singer. You’ve been doing this for a long time.

CF: I’ve been doing this for 27 years. When I got out of high school, I went right into dinner theater, performing show tunes. I’ve done jingles; I sang with a jazz quartet; I’ve opened for people like David Brenner; and I sang a couple of tracks on Frankie Knuckles second album that were never released. I’ve also been signed to a couple of my own deals that didn’t work out. There’s been a lot of turmoil, but there’s definitely been a continuum.

Q: So, you’ve paid your dues in the music business. I don’t think most people know that.

CF: The experience of being in the music business can be heinous, but you know what? All of my trials and tribulations have never made me doubt my abilities. I’m still putting myself out there, and I’m still following my dream.