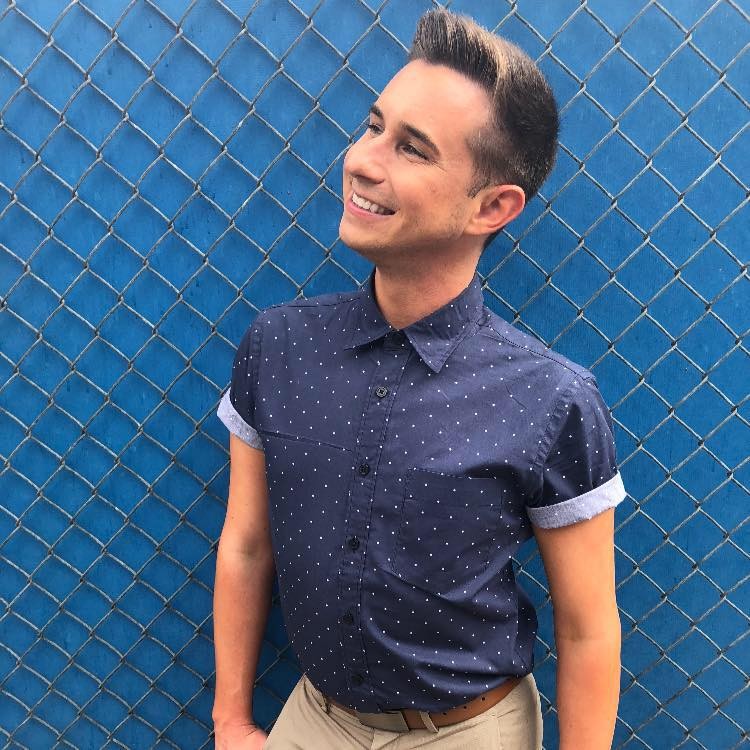 Mickey Keating reflects on his years in, around Boystown

Mickey Keating always wanted to be a boy of Boystown, and he did ultimately move from the south suburbs to the north side of Chicago and lived in a few apartments off Halsted Street. It was a dream-come-true for the then-young-20-something.

Work-wise, well, that was another story. Keating admits he never really had a solid job while living in Chicago. "I was always writing in some spiral or journal (that) I'd bought at a Dollar Store and would tell people I was a writer, even though I hadn't wrote anything substantial, ever."

Keating's ego, he said, didn't want him to be seen by friends and even enemies in Boystown in a simple, basic job. So he begrudgingly started working as a receptionist at a popular hair salon on the South Side of Chicago, his first real job.

"It was (at) that salon (where) I was blessed by an incredible boss and role model, a woman my mother's age who would instill in me professionalism and confidence," Keating said. "I took the traits I learned from her, less than $1,000 in cash and an air mattress, and ventured (to) Los Angeles with hopes of being a writer.

"I anticipated lasting two months before I scurried home.

Now 27, Keating lives in West Hollywood and is a blogger for Instinct Magazine.

He also has had his first short film on Crypt TV, marking his first such paid gig.

Keating is all smiles when talking about Daddy's Girl, which he wrote while living in the Chicagoland area, based on his friends and what he knew. Keating was long told that the idea for Daddy's Girl "sucked," but he refused to listen. "Instead of throwing it away or being stubborn, I compromised and worked on it for about eight years," he said "During that eighth year, it got picked up. The characters were older and colder, but I am so thrilled with the end result and how well it's been doing."

Keating first watched it – while back in Chicago, ironically – with his best girlfriend, who he originally based the main character, Ashleigh Frost (Alicia Rae Underwood) around. "It (was) one of the most sentimental moments of my life," he said.

"Daddy's Girl (is) the first story I ever wrote. I first majored in fiction writing, so I originally write everything as a novel, or short story, (and) still do.

"In high school, I worked at a pizza place with my best girlfriend who is just as outspoken as I am. We quickly befriended the most adorable, angelic blonde from a rival high school who was our coworker. We got into innocent, teenage trouble, to say the least. We'd joke that her parents hated us so much for corrupting their daughter, (and) what if they killed us?!

"I was a bridesmaid in that very friend's wedding over the summer, so we're nothing but family at this point. Yet, the idea was something I hadn't seen before and wanted to exaggerate. So, I created this story: A teenage girl's mother passes and she's left with her emotionally-unstable father who wants the best for her. The new friends she makes are rebels and out of the norm, including a gay friend, a promiscuous girl, and a petty drug dealer. Throughout the original script, there is a theme of who is really the bad guy – her friends for allowing her to release after the passing of a parent, or her father who is eliminating bad seeds?

"Since Crypt TV's Daddy's Girl had to be condensed, I had to rewrite the original and adapt the story into a platform which would succeed in the digital space with a short run-time."

Daddy's Girl, Keating said, "was a story that had to be told."

"Either I was going to tell it, or someone else was," he said. "What father doesn't want to kill his child's friends at some point, right? I was incredibly inspired by films like Halloween, Mandalay Entertainment's I Know What You Did Last Summer, and Friday the 13th, during the adapted writing of Daddy's Girl.

"Beforehand, I was engulfed by older classics like, The Stepfather, and the most recent Sorority Row. I wanted to write a story, and see a horror film, where the so-called 'Final Girl' isn't some pure possession for an audience. I wanted her to be a normal teenager. I don't think anyone I knew who was a virgin by the end of sophomore year growing up. It's not a realistic troupe to me anymore. I also wanted to showcase my favorite character in any horror film, The Mean Girl, and wanted to witness her surviving rather than being the first to get cut, literally. In Daddy's Girl, The Mean Girl is Willow Harper, played phenomenally by Stacy Hernandez, who deserves such recognition for her performance. She's a stand out."

Keating has been obsessed with horror genre since he was a child, such as Tales of the Crypt's Demon Knight and Night of the Demons.

"Horror (movies have) always had a place in my heart," he said. "It's fun to write and low-key, easy. Even when it's bad, it's considered campy and watchable. The horror genre and its fans will always be a part of me, because I'm one of them."

Flick Duvall (Michael Carver-Simmons) is the film's gay character, and hasn't changed since day one, years ago. "Flick was never intended to be a bad friend to the titular character, but his sexuality is what did him in due to homophobia," Keating said. "He was living his life, giving advice on men and dating to his girlfriends. As a gay man, I'm aware there are many different subcultures within the LGBT community, especially when it relates to sex. Flick is kinky. He meets his demise while roleplaying in an anonymous sexual scene; he is waiting blindfolded on a bed, thinking it's his should-be-beau coming in for a romp. Unfortunately, it's Ashleigh's father, Eugene (Rex Mundo and Corey Cannon), who meets him and he is bamboozled.

"I'm a big supporter of females, as they are the most important people in my life, so I didn't want to sexualize another female to have her get the 'skank' edit and be killed off because of it. I was determined to turn the tables and have the clad character be a gay man who is our first to go. I also wanted to give a little wink to that particular fetish being extremely dangerous. You never know who could be on the other end of that phone call."

Keating said he is considering re-visiting his first published novel, Paused, which focuses on a group of Boystown residents dealing with various addictions while navigating life on their dysfunctional terms. "I've had conversations with producers on having Paused prepositioned as a web series, but I'm not certain that's the route I'd like to take," he said. "I have plenty more horror scripts (too) and cannot wait to continue on with them and introduce an audience to my idea of horror."

On Boystown: "(That neighborhood is) one of my favorite places in the world."

On Chicago: "The gay community in Chicago jump-started my life into this bizarre, sensational madness that would be my life. It was chaos, but it was beautiful. It was exactly what I needed to experience after being rather sheltered my entire life. Up until I was 18 years-old, my life was filled with primarily Caucasian, Irish Catholic Republicans and not much else. I didn't know there was a world out there waiting for me to explore that would love me more than I could ever know. Boystown, in particular, introduces you to anyone and everyone you'd want to meet. The melting pot of culture within the small section of Boystown is something I treasure. My greatest friends and inspirations are now of different races, transgender, drag queens, strippers, and so much more. The boys and girls of Boystown have taught me to hustle. That's all we can do in Chicago – hustle for your love, career, and life. It's because of the boys in Boystown that I was able to have enough strength to head to Los Angeles with my tail tucked between my legs. If it wasn't for my experience in that gay culture, I wouldn't be who I am. Boystown, and Chicago, shaped my life. I would be nothing without Halsted Street."

Chicago Memories: "My favorite memories of Chicago are deep instilled in me and a lot of them come out in my novel, Paused. I can't begin to discuss all of them. However, I will say I was one of the originals in a group called Fag Frat. They were house parties designated to the young gays, which at this stage in my life, is skeptical. But, at the time, it was all we looked forward to. I don't think those parties were intended to bring people together as much as they did. I met my core group of best gay friends at these parties and I know plenty others who did as well. I don't even know where or what happened to the people who ran those parties. But, if they are reading this, I want to let them know they gave me a group of incredible friends who are still my support. They are my sanity."

Schooling: He graduated from Victor J. Andrew High School in Tinley Park. "I would love to revisit for a day, but only because I know how many closet cases there were then."

Chicago Favorites: "Unfortunately, I am lactose and gluten intolerant, but, that doesn't prevent me from diving into a Gino's East deep-dish pizza with spinach, garlic, and sausage. Chicago doesn't only have the best food in the world, but also the sexiest men. The ego on Chicago men is mild. In Los Angeles, everyone is trying to be viral famous or something they have fabricated in their later years. The men of Chicago simply want to be themselves and that is exactly what I'm looking for."

More Chicago: "The one thing (I) miss about Chicago is, the smell. OK, hear me out! You will only understand this (statement) if you've experienced, as Kanye West puts it, 'Summertime Chi.' The smell of downtown Chicago, especially if you're cruising in a boat on Lake Michigan, is the smell of Chicago in July. It may be the memory, but each year my girlfriends and I (went) out on a boat for the Fourth of July. The smell, the energy, the city ...is incomparable. To see the buildings, that concrete jungle, full of diversity and hope: That's what I miss the most. Chicago is my city, always will be. Nothing compares to Chicago, and from (my) experience, no gay community compares to Boystown. I wish I could slam a slushie at Sidetrack or a green beer at Roscoe's."