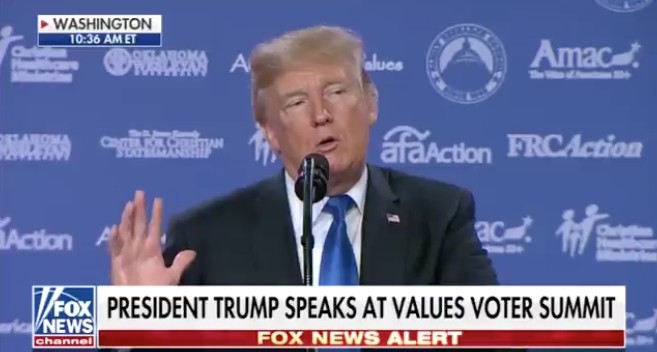 President Donald Trump has become the first U.S. president to speak at the Values Voter Summit, an anti-LGBT conference, where on Friday he told the crowd their anti-LGBT views would "no longer be silenced".

"I am honored and thrilled to be the first sitting president to address this gathering of friends, so many friends," Trump declared. "I pledged that in a Trump administration, our heritage would be cherished, protected and defended like you have never seen before."

Trump received a standing ovation when he talked of appointing Neil Gorsuch to the Supreme Court. Trump noted he signed a religious liberty order on the National Day of Prayer that eased enforcement of the Johnson Amendment, which regulated political activity of churches.

"We will not allow government workers to censor sermons or target our pastors, our ministers, our rabbis," Trump said. "These are the people we want to hear from and they're not going to be silenced any longer."

The annual three-day conference is organized by a coalition of Christian conservative groups, including the Family Research Council (FRC). It aims to "preserve the bedrock values of traditional marriage, religious liberty, sanctity of life and limited government," according to the event's website.

The Southern Poverty Law Center lists FRC as an extremist group with an anti-LGBT ideology. Among those in the crowd were white supremacists, far right activists and religious extremists who oppose the equality of LGBT people.

The FRC's website reads, "Homosexual conduct is harmful to the persons who engage in it and to society at large, and can never be affirmed...We oppose the vigorous efforts of homosexual activists to demand that homosexuality be accepted as equivalent to heterosexuality in law, in the media, and in schools."

Trump concluded, "We will defeat every evil, overcome every threat, and meet every single challenge. We will defend our faith and protect our traditions. We will find the best in each other and in ourselves. We will pass on the blessings of liberty, and the glories of God, to our children. Our values will endure, our nation will thrive, our citizens will flourish, and our freedom will triumph."

80 percent of white evangelicals cast their vote for Trump last November, according to exit polls.