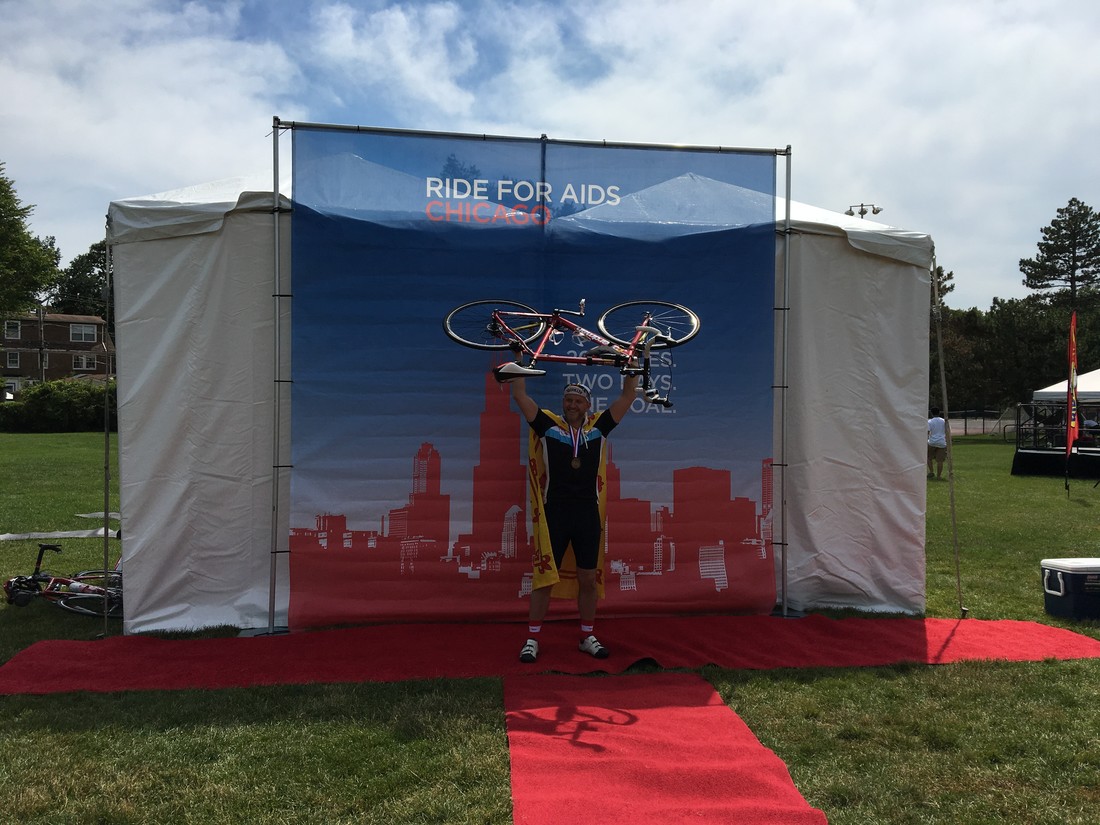 Chicago, IL - After a few cocktails, Richard Dickson was asked, or, more like it, told that he should participate in the annual Ride For AIDS Chicago. That was a year ago, after several gin & tonic drinks.

Dickson, after all, loved cycling when he used to live in Switzerland. However, he had never participated in a cycling event, let alone a two-day, 200-mile fundraising bicycle ride, organized by the Test Positive Aware Network (TPAN).

"I had absolutely no idea is was going to be like," Dickson said. "(But), I was really impressed by all the pre-work that went into the event, the organization, the buildup that TPAN and the teams made happen.

"Most other events I have been involved in were either solitary or not in a community-driven environment, combined with the realization that this is not just a cycle ride to raise money for TPAN, this was a real indicator of the Chicago LGBT community spirit in how much people get behind and support what is right."

Dickson said the 2016 Ride was a mix of emotions and memories. He, for instance, was overwhelmed when he and his husband arrived at the start and greeted by so many. That was, after all, that strange moment of 'Oh, this is real!' I had never cycled that far before and was (worried about my pre-Ride) game-plan and how I was actually going to achieve it. But when I got going and we were all together and setting a nice steady pace, it just felt great and strangely natural."

Dickson said the crew during the 2016 Ride often made him smile and laugh, thus forgetting the distance he had to peddle. His husband, Jonathan, was part of the crew.

"I remember he was on a corner, supposedly telling people to turn right and I got so distracted because I was so happy to see him I completely ignored what he was there for and cycled straight passed," Dickson recalled, laughing.

"After the breaks and lunch we all rode out together as a team and it felt good to see all those uniform jerseys in a line, cycling together supporting each other and making it happen.

When getting to the end of day one, I was so relieved and there were friendly faces and welcoming arms."

Dickson ultimately crossed the finish line after 200-miles with the Scotland rampant lion flag as a cape. "Not many people had any clue what it was, but I didn't care; I got to the end and the people cheering felt amazing."

Dickson said he made "great friends" in the 2016 Ride.

"The genuine love and appreciation for riders and crew is the biggest thing I took from the 2016 Ride. It has contributed to making me feel welcomed into the Chicago community and given me an individual sense of pride as part of it," said Dickson, 46, who lives in Wrigleyville and is a global strategic marketer.

He has lived in Chicago since December 2014.

"In 2016 I was on Team Shaine and had great time. This year I'm really happy to be one of the co-captains for Team TPAN," Dickson said. "I am approaching 2017's Ride with a little trepidation. I have not been able to train as much as I would like and am now sitting in a hotel room in London because I have been traveling for the two weeks prior to the Ride for work. It's going to be tough, but I am even more determined that it is going to happen and I will get myself through all 200 miles.

"My first (goal for this year) was to beat last year's fundraising total, which I am really happy to say I have (done). My next goal is to improve on the Ride from last year, meaning, feel less exhausted after day one, improve my time from last year."

Dickson added, "The Ride for AIDS Chicago is a vehicle to make things better. The Ride is not the overriding challenge. We as riders and crew do what we can to make the real difference happen. In reality, the Ride presents different challenges to the participants, but we all do it because people need help and the services TPAN provides are critical to enabling those suffering daily when living with HIV/AIDS."

Emotions of the Ride For AIDS Chicago:

"Anyone who knows a Scotsman knows we are not emotional types, but doing the Ride makes you stop and think. Reflection is part of what everyone does during the Ride and that comes with mixed emotions. I can honestly say that there a couple of emotions which dominate the overall mood of the Ride: pride and joy. We know why we are there and it all has a different meaning to all of us, but we take it and make it an event to remember to reaffirm that we collectively make it work and do our own part."

"I think a surprising thing for me is the respect you get when you tell people you are doing the Ride For AIDS Chicago – and I don't mean from the 'ride community.' I mean, from the people I work with, the people who don't know what the Ride really is. They seem to respect not only your quest to succeed in the Ride, but the cause. That has surprised me the last two years."