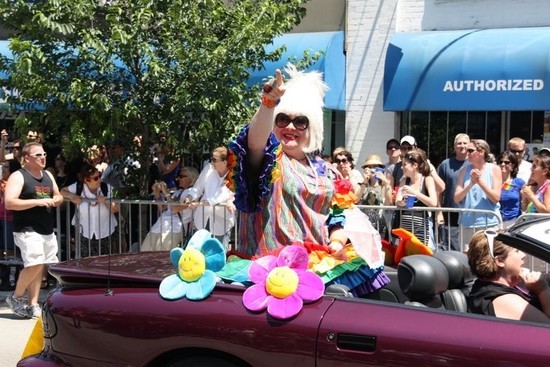 The 42nd annual Chicago Pride Parade marched on despite vandalism to some of the floats intended for the parade, though record-breaking crowds in Lakeview seemed too much for Chicago Police to control.

The day started with the bad news of 51 floats disabled by slashed tires at Associated Attractions on South Halsted, and some of those contingents ended up walking instead of riding.

Despite a rough start in the morning, the parade stepped off at Noon from Halsted St. and Belmont, on time, with Chicago Mayor Rahm Emanuel and Grand Marshal Fernanda Rocha in the lead.

The 2011 parade drew a record number of 800,000 people to the Lakeview neighborhood, a number that doubled from previous years. Over concern for crowd safety, police stopped the parade early with 48 entries redirected from the parade route to Clark St.

As a result, the 2012 parade route was lengthened by 5 blocks to allow more space to view the parade. For the first time, the parade began at Montrose and Broadway in the Uptown neighborhood instead of the traditional Belmont and Halsted start.

The Chicago Pride Parade was first held in 1970 with about 250 participants and spectators. The annual parade, which is held the last Sunday in June, has since grown to become the second-largest parade in Chicago, behind the annual Bud Billiken Parade.

The 2017 Chicago Pride Parade will remain in the Lakeview and Uptown neighborhoods again this year. The parade will step off at noon on Sunday, June 25 at Broadway and Montrose, then the 150 festive and colorful entries will march the 21-block parade route before ending on Diversey in Lincoln Park.

Organizers last month announced that "Orange is the New Black" star Lea DeLaria will be the Grand Marshal for the 48th annual Chicago Pride Parade.