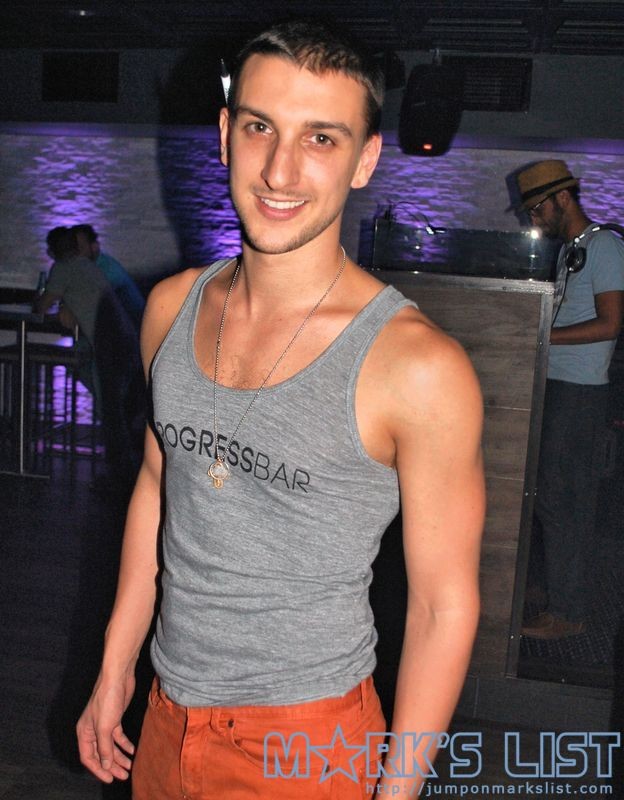 photo credit // william patrick
Chicago, IL - After graduating from Eastern Illinois University in 2011 with a BA in art history and gender studies, William Patrick was working at a publishing company and, admittedly, was not too happy.

So he transitioned into bartending and it just felt natural. He was happy in the new gig, not just the customers he served. His first bartending job was at a small Italian neighborhood bar in Chicago's northern suburbs, called, Santi's Gardens.

Flash-forward to 2017, and Patrick is still behind the bar – and more in the hospitality industry.

Patrick, 28, who was born in Highland Park and graduated from Deerfield High School in 2007, now lives in Chicago's Uptown neighborhood. He came out as gay at 16 while at Deerfield, and is now in a committed relationship. Patrick is the manager of social media/event planning at Progress Bar in the heart of Chicago's Boystown neighborhood on Halsted Street.

"I spent a lot of time as a kid taking the train to Evanston and to Ravenswood," Patrick recalled. "I think being able to explore so many different environments, museums and neighborhoods throughout my teens helped make me a more well-rounded person, made me more self-aware. I also think Chicago is a really friendly city, which I think had a big impact on me."

Patrick said being openly gay at 16, in Chicago's affluent northern suburbs, "was an interesting experience, to say the least." Deerfield, he said, was a very liberal high school at the time, which offered support groups and after-school groups for LGBT students. The school celebrated National Day of Silence and National Coming Out Day. The school also had a very religious fraction which took advantage of their freedom of speech to organize events such as Day of Truth and bringing ex-gay speakers to the school, he said.

"Overall, (high school) was (a) positive (experience, with) some tough moments and a lot of personal growth," Patrick said. "At a young age, I was able to take part in a very politicized conversation that was happening nationally. I was out (and) I was safe. I had gay and straight friends, (and) for most of us it was a non-issue. We all learned a lot from those debates."

Patrick's bartending career included a stint working at the then-new Progress Bar South Florida. "I absolutely loved it down there. It was a blast," he said.

"I'm always thinking about moving forward and what steps are going to get me closer to where I want to be. The bar here is extremely busy and they needed some extra help, so it seemed like the natural choice. I also really missed being a part of my family and friends daily life," he said. "Ultimately, serving is serving, no matter where you're doing it. We all deal with the same problems. Definitely, though, the crowd in Chicago is a lot more eclectic and energized; there's a lot more going on."

Patrick said the best and the worst part of being a bartender are often the same – the people. They either make or break a shift. "I'd say my favorite part is all the interesting people I've gotten to meet and work with, be it entertainers, drag queens and other service-industry folk," he said. "I always try to treat everyone at the bar with respect and kindness and usually that's what I get in return, but from time to time, especially when alcohol is involved, people can be difficult and can make work a lot more stressful."

Overall, Patrick added, "I absolutely love working in the hospitality industry, and doing Progress Bar's social media definitely satisfies my creative and artistic urges. I love planning events, working with drag queens and creating exciting, stimulating environments and parties for people to enjoy themselves and let loose. I love taking people away from the sometimes dreariness of everyday life to a place that is unique, beautiful or fantastic, even if it's as simple as afternoon tea with fresh-baked goods. Eventually I'd like to do something more privatized or specialized. I love hosting brunches, cocktail parties and events of that nature, so maybe working with clients and doing event planning or coordinating."

At The Bar With William Patrick ...

Favorite Chicago Restaurants: "This is such a tough question because I absolutely love food and love dining. I have to answer it in a few parts (as) Chicago is second to none when it comes to great food. Forbidden Root in Ukrainian Village is a restaurant with a unique micro-brewery where they make some really cool botanical-based craft beers and offer some really amazing plates as well. RM Champagne Salon is definitely one of the most romantic spots in the city, located in the West Loop with two of my other favorites, Avec and Little Goat Café, right around the corner. M. Henry is my favorite spot for brunch and if you want chicken wings, CRISP in Lakeview will change your life. Right now, though, I'm having a love affair with Mindy's Hot Chocolate in Wicker Park, (with) amazing food, and an even better dessert menu."

Drink-of-Choice At A Bar: Tequila, either Don Julio or Herradura, and soda water. "If I'm drinking off a cocktail menu, I tend to gravitate to (an) Old Fashioned."

Favorite Chicago Tourist Destination: Chicago Botanical Gardens, in north suburban Highland Park, particularly The English Wall Garden. "Of course the Modern Wing at The Art Institute of Chicago and the Tiffany Dome and stone work throughout the Chicago Cultural Center are architectural gems."

Favorite TV shows: Strangers with Candy with Amy Sedaris and Steven Colbert, and Game of Thrones