Partner Of Slain Paris Policeman Says He 'Lived Like A Star' 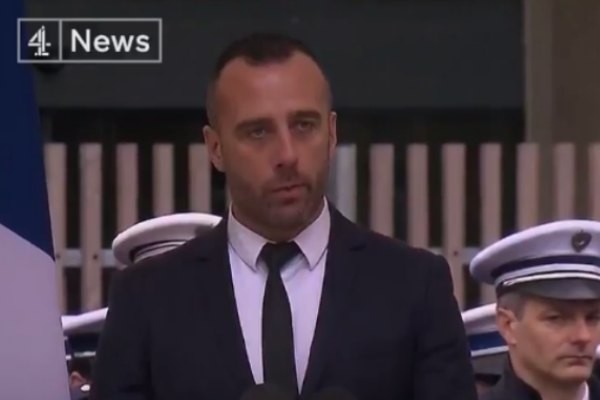 Paris, France - The partner of the dead victim of last week's shooting in Paris gave an emotional eulogy on Tuesday.

Xavier JugelÉ and two other police officers were shot by a lone gunman who opened fire Thursday on the Champs-ÉlysÉes in Paris. JugelÉ lost his life, while the others were wounded. Police killed the gunman as he tried to flee the area.

JugelÉ's funeral was attended by presidential candidates Emmanuel Macron and Marine Le Pen. French President Francois Hollande awarded JugelÉ the Chevalier rank of the Legion of Honor, one of the nation's highest honors. "France has lost one of its bravest sons," Hollande said.

Cardiles said that he was uncertain whether the "extreme pain" he was feeling would ever end, adding that he was suffering without hate.

"I returned home that evening without you," Cardiles said, reliving the night JugelÉ died, "with an extreme and profound pain, that maybe, one day, will weaken, I don't know. This pain made me feel as close as ever to your colleagues who are also suffering, as you do too, silently. As I do, silently."

"As for me, I'm suffering without hate."

"I don't feel hatred Xavier, because it is not like you. Because it does not correspond to anything that made your heart beat, nor why you entered the police force. Because public service, helping others and protecting everyone was part of your education and your convictions. And tolerance, dialogue and patience were your strongest weapons."

JugelÉ was also among the police officers who responded to a 2015 attack on the Bataclan, where 89 people lost their lives as three gunmen stormed the concert hall near Paris' gay-friendly Le Marais. ISIS has claimed responsibility for both attacks.