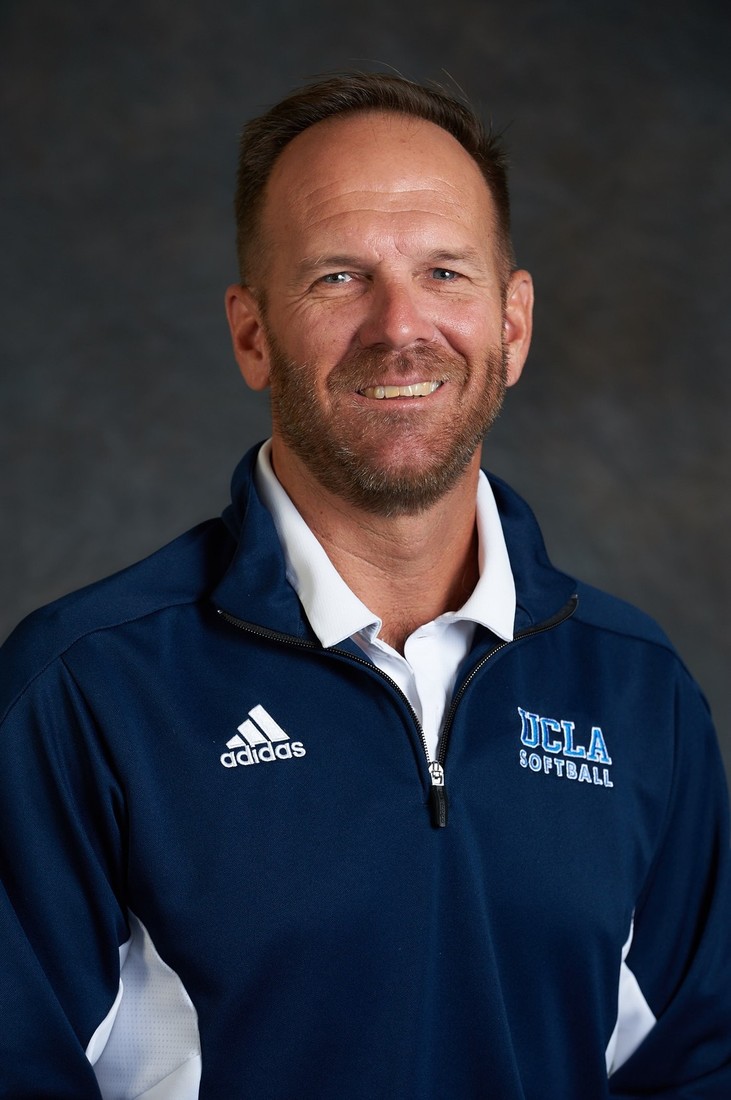 photo credit // kirk walker
Kirk Walker considered medical school, but instead opted for softball coaching. And boy has he had success on the field, in that field.

Walker was an assistant coach at UCLA while an undergraduate student, and the team won NCAA titles in 1984, 1985 and 1988. "It was a powerful influence on my passion to bypass medical school and choose coaching as a profession," he admitted.

Walker was hired upon graduation and was a part of NCAA Championships at UCLA in 1989, 1990 and 1992 before leaving to become the head coach at Oregon State University in 1994.

He returned to UCLA in the fall of 2012, which he admitted was, "very surreal and a full circle journey back to my roots."

Coach Walker is still on the Bruins bench, as UCLA is a Top 10-ranked team this season, one that dreams of stardom at the annual Women's College World Series, which will be held in early-June in Oklahoma City.

Walker is the team's third-base coach, flashing all offensive signals. He also throws batting practice and assists fellow assistant coach Lisa Fernandez with the hitters. Base running techniques and training also fall under Walker's responsibility, as well as short game skills. He works primarily with the UCLA pitchers and outfielders.

"My strength has always been in my ability to work with people and build leadership and culture with groups," he said. "I have a very competitive drive that combines with my passion for developing people to succeed and achieve their goals."

For UCLA softball, the goal is simple: win. And the Bruins do plenty of that.

"Being a part of UCLA softball for 15 years means having a continual expectation of being a Top 10 (ranked) team," he said. "It does feel good that the athletes are receiving that recognition, but the only ranking we really hold in the highest regard is the final ranking of the season after the championship – and being the final team on top in the rankings.

"I was fortunate to coach Oregon State into the Top 20 and Top 10 (national rankings) many times during my 18 years and those were equally rewarding given the history of the program prior to taking over."

Yes, coaching is still a lot of fun for the 52-year-old Walker.

"Every year there is a new excitement (in) the hunt for a title, and for the team to find (its) identity," he said. "My passion for the past 20 years has been mostly on personal and player development. I am fortunate to have fast-pitch softball as a classroom for the athletes to grow and evolve into strong, confident, successful people. Being competitive in the pursuit of the national championship is the greatest teacher and if everyone contributes to the best of their ability, the team may be fortunate to hold up that trophy on the final day.

"But it's the pursuit, dedication, and commitment to the process that builds character. "Excellence is not what you attain; it's what you do every day in pursuit of success."

Walker's softball resume includes six NCAA titles and four USA Women's National championships. He also coached the U.S. National Team for the 2000-2004 Olympic Quadrennium, which he said "was a thrill," and he will do the same for the 2017- 2020 Olympic run.

"I take each year as it comes," he said when asked how much longer he plans to coach. "I had originally planned to retire from coaching in 2014 when my last contract with Oregon State would have ended, but this career path that took me back to UCLA altered those plans.

"For now I'm am loving being back at UCLA and the hunt for an NCAA title. I certainly hope to win at least one more NCAA Championship before retiring from collegiate coaching."

The LGBT Side of Sports

In the fall of 2005, Walker was still riding high after winning the Pac 10 Championship and being named the Pac 10 Coach of the Year. The team was returning a strong group of upperclassman, which meant that the 2006 season could be another great season. During the first team meeting of the year, amid the team's fame, Walker came out – he told his team that he and his then-partner of 9 years were entering the open adoption pool to hopefully be selected as parents for a newborn baby. A few days later, his coming-out was reported by Outsports.com with Walker's permission. Very quickly local media picked up on the story and within a few weeks the New York Daily News, ESPN and LOGO-TV had all reached out to cover the story of the "first publically out Division 1 Coach."

"I believe the trust and connection that the team felt with (me) after sharing such a big part of my personal life was the extra glue which bonded that team into the history books," Walker said. "I don't believe I ever changed my coaching philosophy or my approach, but the validity, authenticity and integrity with which I was able to impart on my athletes was exponentially expanded. Teaching young athletes to take ownership, responsibility, and live with honesty and integrity while competing at the highest level of sports has always been my coaching creed. And when I could actually live with that honesty and integrity for my athletes to see, it only gave my words greater impact.

"I believe it is a missed opportunity for coaches that remain closeted. Their athletes and others in their sphere of influence will be greatly impacted along with the personal freedom that would result from the coach being publicly out."

That said, Walker admitted he was nervous coming-out, mostly because he didn't want to lose the trust and respect of the athletes or his coaching peers.

"Prior to coming-out in the media, I had spent several years being fairly open to some of my coaching peers and colleagues, but I did not share it freely with the media or with anyone who didn't directly ask me about it. I was not going to deny or lie about it, and doing that for a few years kept the actual coming-out day from being completely difficult. I knew gay coaches, but I did not know any who had made a public statement. So it was new territory, for sure. But once I told my team, telling the media never really held the same fear for me."

Walker helped form the Equality Coaching Alliance for high school, college, professional or international coaches, administrators, officials, and sports professionals to have a network and support group, dating back to 2011 via Facebook. Walker was the only collegiate coach when it launched, among a grand total of six members.

Today, there are close to 400 members, with new members joining weekly.

"We are nearing a tipping point that, in the next five to 10 years, we could see out athletes and coaches at every level, in every part of the country, in every sport."

Take, for instance, football player My-King Johnson, who recently came out – and he will be, quite possibly, the first out, recruited scholarship athlete at a major Division I FBS school.

"I have been incredibly fortunate to mentor and counsel hundreds of athletes and coaches as they either come out to themselves or eventually come out in the media," Walker said. "Obviously many are not celebrities or (generate) national attention, but to be a part of their journey to a happier and more successful life, (it) is as exhilarating as winning a National Championship."

Walker knows coaches and athletes who have long struggled coming-out, and many who are still in The Closet. Walker always stresses to the confused and questioning that they are not alone – and certainly won't be if they come out.

"I have not yet met someone (who) said they wish they would have waited longer to come out," Walker said. "The support that athletes and coaches are having is almost always positive and universally (elevating) a higher level performing athlete or coach."

So what will the intersection of sports and gays be in, say, 10 years?

"I believe we are fast approaching a tipping point where the flood gates will really open up and being LGBT in sports will carry very little attention or national dialogue," he said. "I hope we see it in 10 years, and at the rate things are evolving, there will be athletes or coaches at every level of play, in every sport, in a short period of time."

Mack Beggs, a 17-year-old high school wrestler in Texas who has transitioned to male, captured worldwide attention in recent weeks when he was forced by the state to compete for the girls' wrestling state title – which he won.

"There will be much that comes from this particular case in Texas because it will challenge the logic and thinking that has brought about some of the anti-transgender legislation in several states in recent years," Walker said. "I'm proud of Mack and the great courage that this young athlete has shown."

Walker said his own being-out at such a high-profile program is "paramount" – to be visible, to be an example of athletic success that is independent of his sexuality. Walker's own coming out story covered by the Portland Tribune in the fall of 2005 had a direct link to Sheri Murrell coming out publically as the first out NCAA Division I women's basketball coach. And the story of his coming out covered by the Los Angeles Daily News was carried around by NBA executive Rick Welts in his brief case for months prior to Welts' own public coming-out.

"I am a coach and leader first, and the fact that I am gay does not merit more importance than those facts," he said. "That said, it is incredibly important that coaches be the example that we seek in our athletes – being authentic and having the integrity in our lives. So for me to be at an incredible and historic athletic institution and be an out gay man charged with developing and training student-athletes to prepare to be the next leaders in society is tremendously important for others to see, especially coaches and leaders not yet being authentic to themselves or others."

Walker also is a major player in the Sports Equality Foundation, formed about a year ago to fund and create opportunities for LGBT coaches, athletes, and professionals to help expand the ever-changing culture of inclusion in sports. In its first year, the Sports Equality Foundation funded four grant requests and sponsored 12 individuals to attend the Major League Baseball (MLB) Business Diversity Summit in Phoenix. The SEF also provided training and competition support for USA dual-athlete and transgender sports star Chris Mosier on his quest to represent the U.S. internationally.

The biggest gay sports event of the year – without legitimate games being scheduled, that is – is June 15-18 in Denver, the second Outsports Reunion. Last year the event was held in Chicago, coinciding with the Chicago Pride Parade.

This year's event will bring together about 200 from the sports world – athletes, coaches, officials, team executives, and more.

"Last summer in Chicago was historic and, more importantly, extremely impactful to everyone in attendance," he said. "I was only able to attend the Friday activities, but the networking and sharing of stories and experiences were powerful.

"What we learned in Chicago is that building a social community has far-reaching impact on developing self-esteem, motivation, and confidence for individuals to impact change in their own sphere of influence. This is so powerful when we realize that culture in sports is most quickly changed by individual relationships versus policy or legislative procedures alone.

"So, I see the event in Denver this summer as being a much more powerful and an expanded influencer on the change in culture by building and fostering individuals through networking and community."

Favorite Sport (other than softball): Tennis