Meatballs with a chance of dead mom 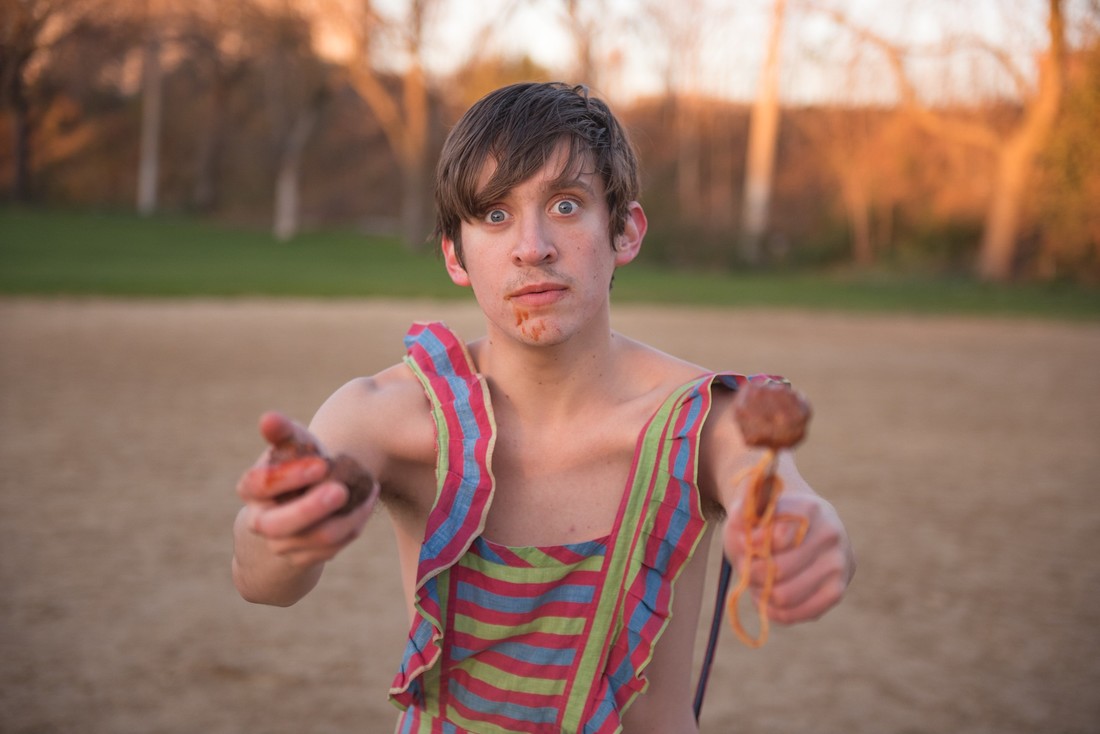 “Meatball Seance” every Thursday through April 6 at Mary's Attic

Take one John Michael; remove everything but his underwear and stir in one (cute) apron, one hot plate and one candle. Add alcohol, four audience participants and humor with just a pinch of sadness and a healthy dose of thought. When you're doubled over laughing, "Meatball Seance" is ready to serve.

Close to celebrating his two-year mark in Chicago, gay performance artist John Michael is taking his third one man show to Mary's Attic in Andersonville every Thursday evening through April 6. In "Meatball Seance" John Michael cooks (or rather cons the audience into cooking) his deceased mom's special meatballs onstage in an attempt to contact her spirit so she can meet and approve of his new boyfriend.

In his typical fashion, the quirky, energetic Dallas-native employs high-octane comedy and silliness in order to tackle the dark and sticky sides of topics like relationships, death and what happens after you've reached your emotional bottom.

"It's become this vehicle for bringing up the fact that my mom is dead without causing people to say sorry," the Dallas native said. "For the longest time whenever I would just mention it, people would say sorry...But this show is weird and funny and it comes at it from a different angle...When I bring up this show people laugh and this woman made me laugh all my childhood -- it's who I got it from."

"She got sick right when I started falling for a man I was dating," he continued. "And all while she was sick, she was like 'I don't want to meet him when I'm not...on my feet, when I can't host him over for dinner.' And then she died. So she's never met someone who I've loved...but she will. That's the idea."

Much of "Meatball Seance" revolves around and was borne out of this pretty universal concept: that moment of clarity that happens when you meet someone's parents and see their home life. The show, in part, is John Michael trying to imagine what it would be like to still have that possibility and, most importantly, the implicit understand that comes with it.

"It's almost like the last step in getting close to someone is them seeing where you came from -- them seeing your home," he said. "It's hard to explain, but everything all of a sudden...it's the missing piece of the puzzle of getting to know someone that I will have to navigate for the rest of my life now, at 27, without having my favorite person in the world be alive...I'm very close with my dad, but we're not very similar. But my mom was very quirky and strange and larger than life and many times my friends said she was cooler than me."

The show is also a way for John Michael to cope with his own feelings surrounding his mother's death and his life after. John Michael's mother's meatballs are sacred to him and unique to her. She learned the traditional recipe -- breadcrumbs soaked in milk, fennel, parsley, etc. -- as meatballs were his dad's favorite, but added chopped jalapenos to throw a little of herself and her taste into the mix.

The John Michael on stage hopes that her special meatballs will help him contact her spirit, but making her meatballs serves a more earthbound purpose as well.

"The weirdest thing about denial is the memories of her went away right when she died, so I forgot how her face looked -- it was denial of her absolute existence -- and then for the longest time I stopped talking about her," John Michael said. "But now as I'm doing things, memories come out...I've realized that if I want to live with my mom, if I want to have a relationship with the memory, I need to do the things she used to do -- like cooking her meatballs."

All of this seriousness is tackled with such speed and effervescence so as to render seemingly serious things hilarious. In fact, much of John Michael's comedy is about laughing at things you aren't supposed to laugh at.

The audience frequently finds themselves being stared down or talked to directly by the bouncing, smiling actor. A lucky three each night will even be chosen to play John Michael's boyfriends ("I always buy my boyfriends drinks," he says) for a period of the show, assisting him in preparing meatballs and taking part in his seance rituals.

And while John Michael has employed a healthy bit of audience participation in his past shows, the time he spends on stage with another person in this one man show takes it to another level. What he loves, he says, is the spontaneity it affords, the possibility that everything can change in an instant. It keeps his shows feeling fresh week after week, but also leaves him at the mercy of his participants.

"It's terrifying it's why I'm doing it -- because it makes me feel alive," John Michael said. "And that's how I want to live right now, on the edge...on the edge of my fuckin seat, because it's much more comfortable that leaning back..."

"For the last two years I've not been brave enough to talk about her, because it bums people out because they're scared that their mom's gonna die -- it's really whacked up like that," he continued. "And now I have this vehicle that is bizarre and I can bring her back through making people sit on the edge of their seats like I'm trying to live my life."

In "John Michael and the Order of the Penix," the first show he brought to Chicago after moving here in 2015, the performer unleashed a magical strain of AIDS in the world of Harry Potter as lens to talk about his own lack of personal sexual responsibility as a young 20-something. In his recent show "Dementia Me," he used used his time working at a memory care facility as a vehicle to talk about his own mental breakdown upon the death of his mother. "Meatball Seance" follows suit, exploring grief and relationships by attempting to contact his mother's spirit in a silly facsimile of ceremony where the emotional is equated to the spiritual.

"The technique of the show is that it's so bizarre and so fast paced that it's funny," John Michael said. "The idea is that the grief is all of a sudden accessible and they can see this man who's driven to a point where he's in love with these three different men, three different parts of his life, and they're never going to be able to meet his mom but that's not gonna stop him from trying."

"Meatball Seance" opened Thursday, March 2 and plays every Thursday through April 6 at 7:30 p.m. in Mary's Attic, 3400 N Clark. Tickets are available for $15 and can be purchased online or at johnmichaelplays.com.