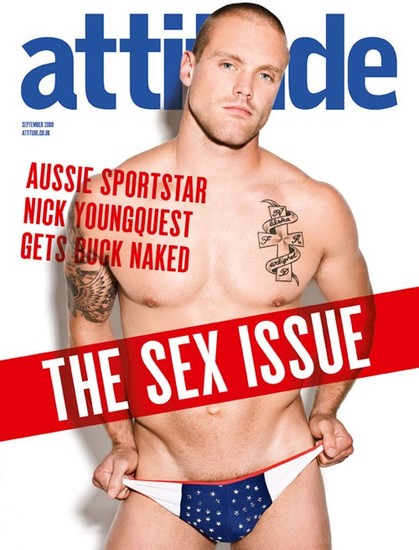 nick youngquest on the cover of attitude

The newest cover of UK gay monthly Attitude has the gay blogosphere wagging its collective tongue over a hot ten-page spread of Aussie footballer Nick Youngquest.

Youngquest graces the cover of the magazine's yearly Sex Issue in the act of taking off the patriotic red, white and blue bathing suit he has carefully been shoehorned into.

The Aussie native now playing football for the Brits says he's flattered by his gay admirers.

"I'm very flattered," Youngquest says. "If gay men like looking at me, then that's great!"

And says he's optimistic that homophobic attitudes in the world of professional rugby will change: "We want to get to a time when everyone can be themselves … you get me?"

Frisky blog Hunk du Jour said Youngquest has "acquired a huge gay following," while gay sports authority Outsports.com commented: "Interesting that Youngquest would pose for the cover of The Sex Issue for a gay-men's magazine. Interesting and cool ..."

On the Net: UK's Attitude website is at attitude.co.uk.