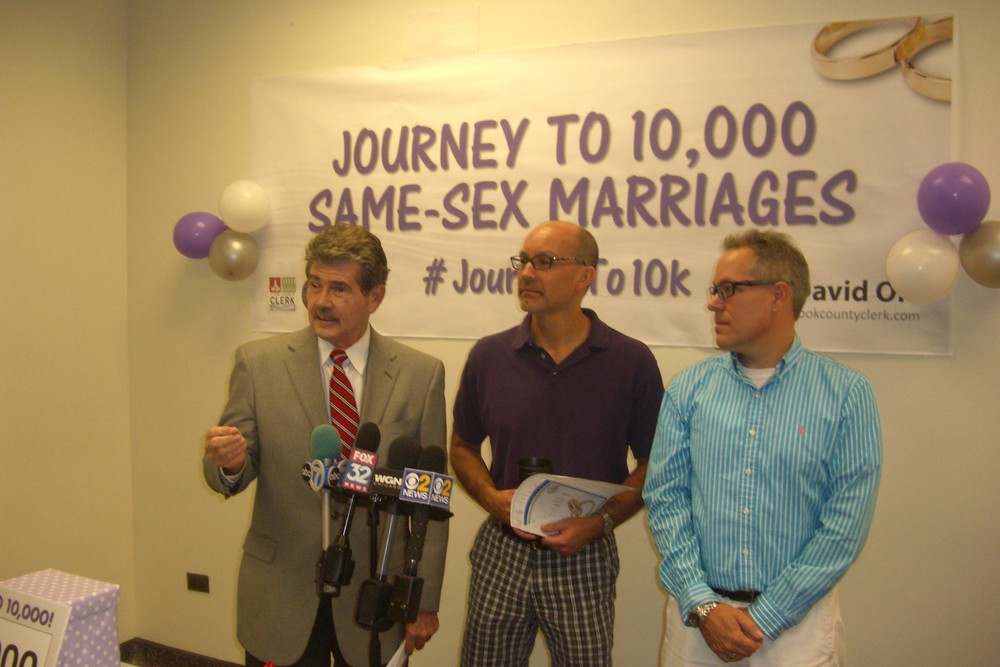 They simply wanted a marriage license.

They got much more than that.

Aranda, 50, a flight attendant for United Airlines, and Beauchamp, 49, who manages That's Our Bag luggage store in downtown Chicago, became the 10,000th same-sex couple to receive a marriage license in Cook County since the clerk's office began issuing them in early-2014.

The morning started with 9,999 same-sex marriage licenses issued in Cook County. Orr and a throng of media waited more than two hours until Aranda and Beauchamp arrived. The two had no clue they could, or might, be No. 10,000, or even that such an LGBT milestone was about to be set.

It was just an off-day for them, the perfect day and time to get the license.

"We did not expect this at all," Aranda said.

Beauchamp added, "It's a great thrill; we appreciate all of the hoopla, which was unexpected."

"The wait is over," Orr boasted as he welcomed the 10K couple, which was greeted with a gorgeous rainbow cake, bouquet of flowers for each, and variety of other presents, including a honeymoon package, including hotel accommodations, fine dining, and entertainment, provided by the Las Vegas Convention and Visitors Authority.

They also received flights to Las Vegas, courtesy of Southwest Airlines, which drew a quip from Orr. After all, Aranda has been a flight attendant for United for 25 years. "United can match the offer, if they want to make it first-class (for the couple)," Orr said, laughing.

The two met in November 1998 through mutual friends at a dinner in Uptown, "and that's where it started," said Aranda, who was born, ironically, in Las Vegas and raised in Tempe, Ariz.

Aranda said the two decided to get married about a year ago, but there wasn't even a proposal. They just talked about getting married, since it became legal across the U.S., and they agreed.

They plan to get their rings next week and their reception is on Sept. 25 in Andersonville.