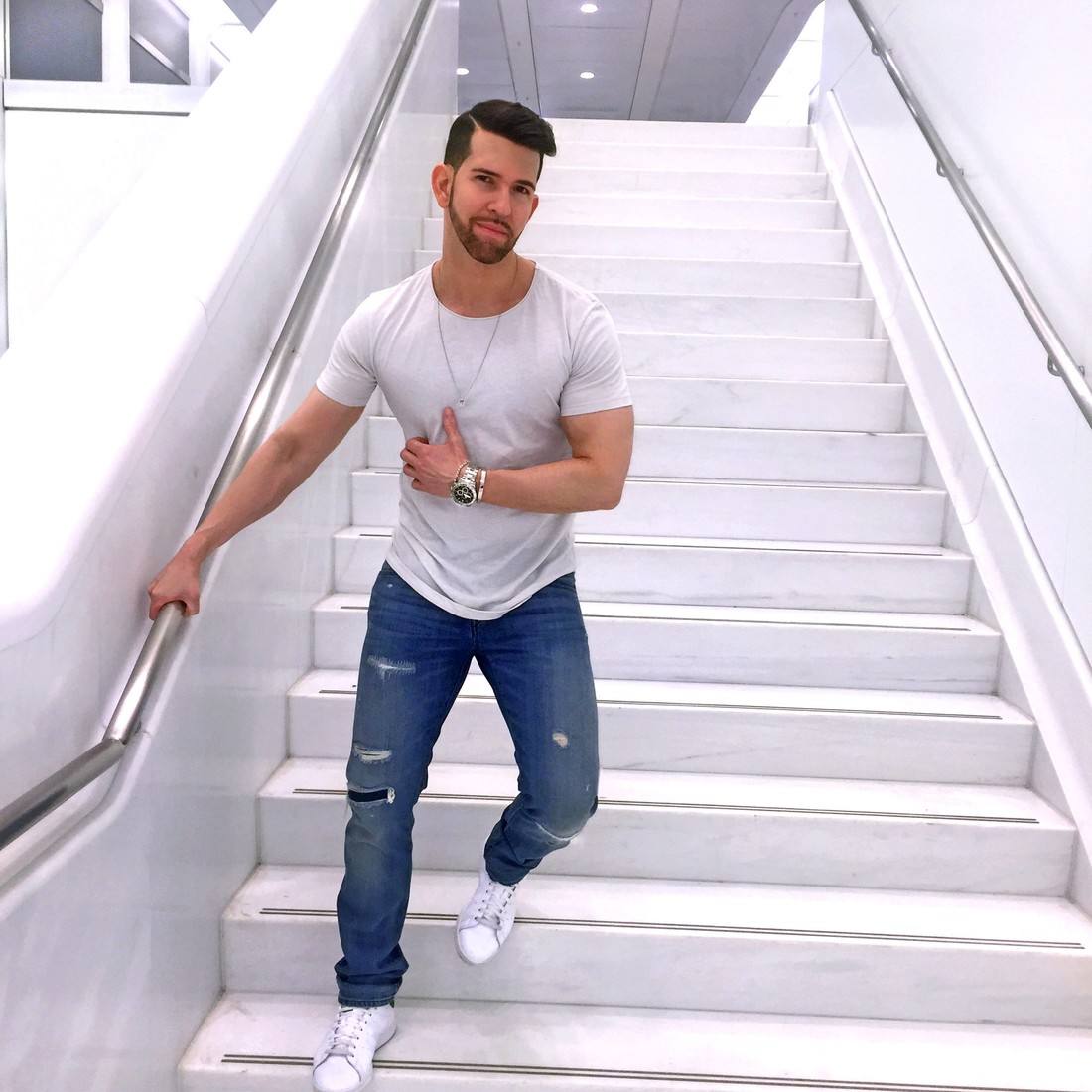 Strong supporter of LGBT community, Leslie has landed No. 1 hits

What's next musically for Aiden Leslie is deeply rooted, like his songs, in his personal life as it's been "an interesting year" for the New York-based singer. And that's putting it mildly.

Last summer, Leslie was touring and 'I Just Go' charted on Billboard. He was beyond excited.

But then, after several years going non-stop, things shifted when his father passed away at the beginning of last summer. He kept going into the fall musically, then felt he needed to reflect a bit and decide what would be next. He also wanted to spend time with his mother, who was alone in Ohio and not well herself.

"My sister passed away 10 years (earlier) and now my Dad was gone, so it just felt like I needed to be with her; it was just us," he said.

Sadly, his mom passed away this past spring.

"Within in a year, I had (so) much success in my musical career, but lost my parents," he said. "That said, I have been taking stock of what will be my next move, but one thing I'm sure of, I will never stop creating and music is core for me.

"I'm excited to see what will be ahead."

Last year, for instance, Leslie started working with an organization called LIVE OUT LOUD, which inspires, nurtures and empowers LGBTQ youth to build a successful future by connecting them to positive role models and affirmative experiences in the LGBTQ community.

"By providing youth with opportunities to interact with adults who understand the realities of living openly as a member of the LGBTQ community, Live Out Loud helps young people to achieve academic success, healthy relationships, rewarding careers, and a fulfilling life," he said. "Live Out Loud forges these crucial connections through innovative, hands-on initiatives that include: bringing positive LGBTQ role models into classrooms and schools; bringing LGBTQ youth into workplaces to meet LGBTQ professionals from all walks of life; and providing financial and mentoring support to young scholars and leaders. Through my work with these young kids, it just makes me realize how things have changed so much and how there is so much more opportunity for kids to be who they are meant to become. I can only share my story in the hope they will find some inspiration that they can go for their dreams and see them happen."

Leslie, 39, is an Ohio native who now lives in New York City's Chelsea neighborhood. He first shot to stardom in 2009 when Junior Vasquez's remix of Leslie's 'Love to Hate You' – a remake of the Erasure song – was a dance floor sensation.

In 2011, Leslie struck again with 'Worlds Away,' a song that paid tribute to his late sister – and its music video reached No. 1 on MTV Logo's music countdown, where it remained for a record four consecutive weeks.

Then came the pop anthem 'Trying to Leave Now,' and it too reached No. 1 on several pop/dance charts around the world.

Leslie said he has been "blessed" to have had the musical success he's had.

"The music industry is not an easy place to survive, so I'm aware that not everyone gets to go on the ride I've been able to," he said. "'Worlds Away' was the beginning of it all for me, (and that song) holds a special place in my heart. I think it touched a chord with a lot of people, (and) that makes me happy. I never expected anything to happen after I released it; I just wanted to put something out there that expressed what I was going through; that in (and) of itself, I considered a success."

In 2015, Leslie gave the world 'I Just Go' – another personal journey.

"The video, from a literal standpoint, is the story, obviously, of a relationship, but it's more of a metaphor for the song," he said. "I wrote the song at (a) really dark time in my life; I was very lost. If you look at the lyrics, they are on the dark side: I could care / should care / but I just go. It's that universal thing of doing the same thing over and over again and expecting a different result. I was lost. I was doing things that were not good for me, hanging out with the wrong crowd. The relationship part was only one element of it.

"For the ocean scene, it was meant to be threaded throughout and to set the tone. It was this paradox in a way ... who is on a beach in suit? But if you watch, it's me running in the waves with all this structure of a suit, which makes no sense. It was a reflection on where my life was in that moment...everything was fighting each other and nothing was working. But, I was wanting something completely different and struggling to keep it going at all costs. It's ironic and visually interesting to watch this be created in this setting."

Leslie said his favorite singing moment, so far, was the 'Worlds Away' Video Release party and performance. "It was a full-circle moment for me because it was in New York City at the legendary Splash Bar," he said. "The club that night was packed with a mix of people, but was heavily loaded with club and music industry friends and colleagues. I knew they were coming for me, and it felt so special. It was my debut and I felt the pressure; thankfully it went great. It just started the whole several year journey for me. It was my hometown and I was finally ready to go—it was magic."

It also was a magical moment for Leslie – and music fans – when he performed in Chicago at Market Days, 2013. Leslie shared the same stage with Wilson Philips, 10,000 Maniacs and Andy Bell. "(That was) so cool, a dream come true," Leslie said. "I love Chicago; it's so beautiful. I could probably live there someday."

On being an out/gay singer with success: "Profoundly grateful, especially to my fans."

On supporting GLAAD on Spirit Day: "The message is so important. I don't know many people who have not experienced bullying in some way, shape or form. Like anything, the more we confront it, the better we are at handling it."

Coming-out: "I was never really 'in.' But, when I was 14 years-old, I snuck into The Dock, a gay club in Cincinnati. All I really remember was dancing in a spotlight on a box for five hours straight. I was soaking wet when I left ... the rest is history."

Musical inspiration: "Way too many to mention, but I love a good songwriter, someone who can tell a story simply with a catchy melody is a gift. That always gets my attention."

Little-known fact: "Most people know me as the singer/songwriter, but what you may not know is that I have worked in public relations and marketing in the fields of beauty and fashion."

Biggest/best fitness tip: "Eat clean and stay on a diet."

Dream date: "Quiet Italian dinner and a bottle of wine, or two."

Superstition: "Saying something aloud before it's confirmed to happen to anybody you don't love and trust. Keep it to yourself until you know for sure."

On performing at New York City's 2015 Pride Parade: "That was a special day because gay marriage was legalized that weekend. The energy was incredible and it just made you feel so proud ... and to perform live on 5th Avenue, on a float before hundreds of thousands of people, what could be any better?!"

1) "Take an evening stroll on The Highline in Chelsea."

2) Picnic in Central Park near the reservoir. "I like it further north in the park because it's more residential and quieter; you really feel a vibe of the city and everything that makes it so amazing."

3) Going for brunch in Williamsburg, Brooklyn on a mid-Sunday afternoon.

5) The Freedom Tower. "Everybody has to do this; it symbolizes so much strength in the fight for our freedom. I was in New York City (on) 9/11, so it's extra special for me."

For more about Aiden Leslie, here are his social media outlets: