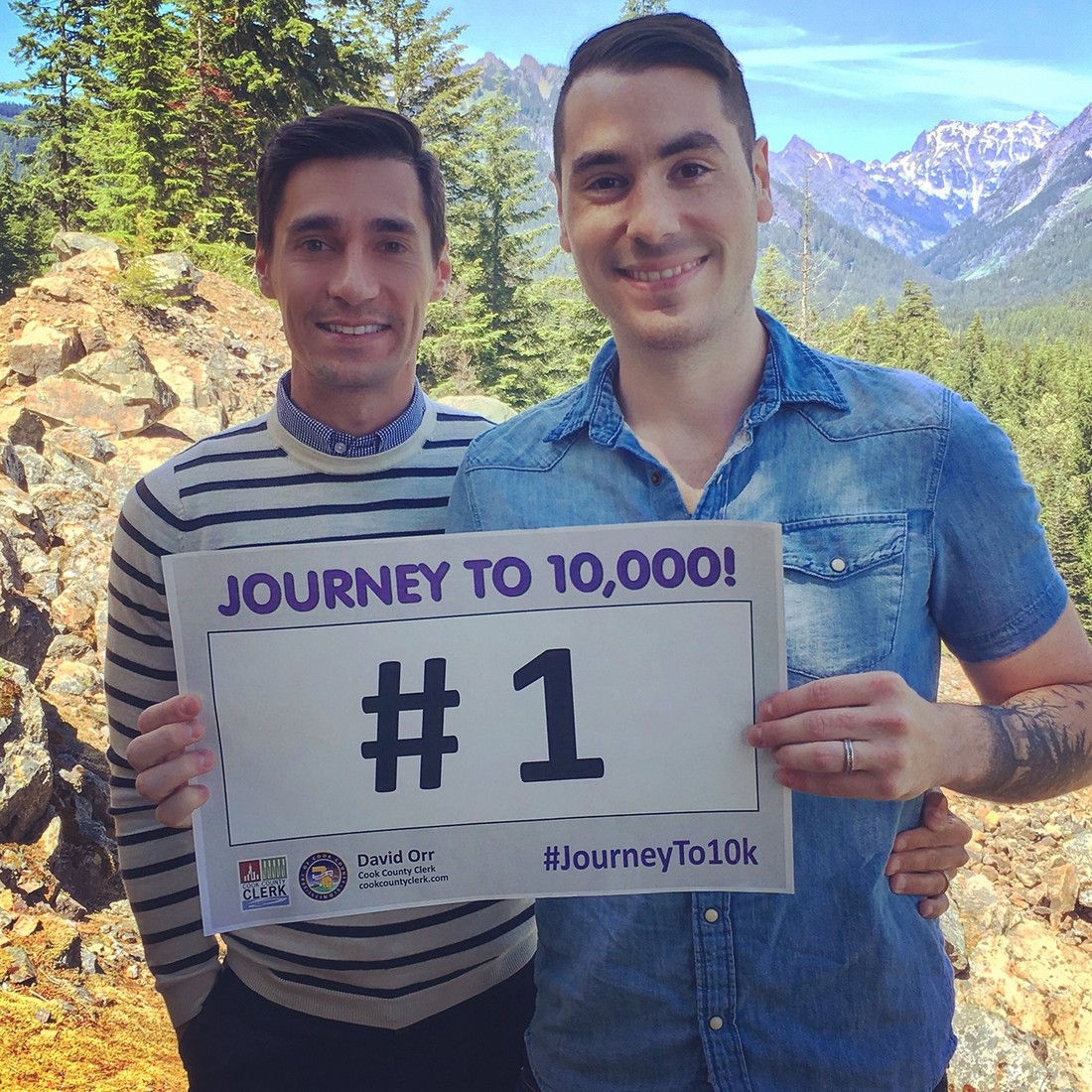 Chicago, IL - The Countdown to 10,000 is in the home stretch in the office of Cook County Clerk David Orr – and one grand celebration for the 10-grand couple is being planned.

Back in February 2015, on the one-year anniversary of same-sex couples being able to be married in Cook County, Orr's office acknowledged that it then had issued about 6,500 same-sex marriage licenses.

"So we all just started wondering, when we will hit 10,000?" Scalzitti said. "I think we all knew (the milestone) was something worth celebrating, a special occasion to mark how far we've come."

"I'm thrilled that soon my office will issue the 10,000th marriage license to a same-sex couple. We should be proud of this historic milestone, and pleased that as more same-sex couples get their marriage licenses, it will just become more of an ordinary occasion," Orr said. "We can't forget the hard work and efforts (of) so many people – legislators, activists, LGBT organizations, allies, and ordinary people who just wanted to be able to marry the person they love – so that we could get to this point.

"There's still a lot of work to do, though, to ensure full equality. In states like North Carolina and Utah, government officials can refuse to marry same-sex couples because of religious reasons. That's not fair, and that's not equal. Bigotry remains, and efforts to impede marriage equality continue, just as the discriminatory efforts to limit voting rights, voter registration, women's rights, and pay equity continue.

"So we can't let our guard down, and we have to keep vigilant in the fight for equality."

Scalzitti confirmed that a special ceremony, and more, will salute the 10K couple, including flowers, gifts from area businesses, and more.

"First of all I can't believe that I am old enough to have been partnered with the love of my life for 20 years. Then the second thing is that, within my lifetime, I have been able to experience registering for domestic partnership, then civil unions, and now marriage," said Mona Noriega, Commissioner of the Chicago Commission on Human Relations. "Marriage for me is full recognition of the significance of our relationship to each other, but also demands and gives permission to our family and friends to recognize the importance of our commitment to each other—in terms that are the same for all—marriage."

Scalzitti said Cook County peaked at about 270 same-sex marriage licenses in a month-span, but now averages about 150. June, July and December were the busiest months.

"Issuing marriage licenses is one of the most enjoyable parts of his job, David has often said," Scalzitti said.

About 92 percent of the same-sex marriage licenses issued in Cook County in 2016 have gone to Illinois couples, Scalzitti said. Those traveling to Cook County for the license are mostly from nearby states, such as Wisconsin, Indiana and Michigan, he added.

The average age of those same-sex getting married in Cook County is about 37, which actually has gone down a few years since marriage equality began in Illinois; and about 52 percent are gay men, as opposed to 48 percent female, Scalzitti said.