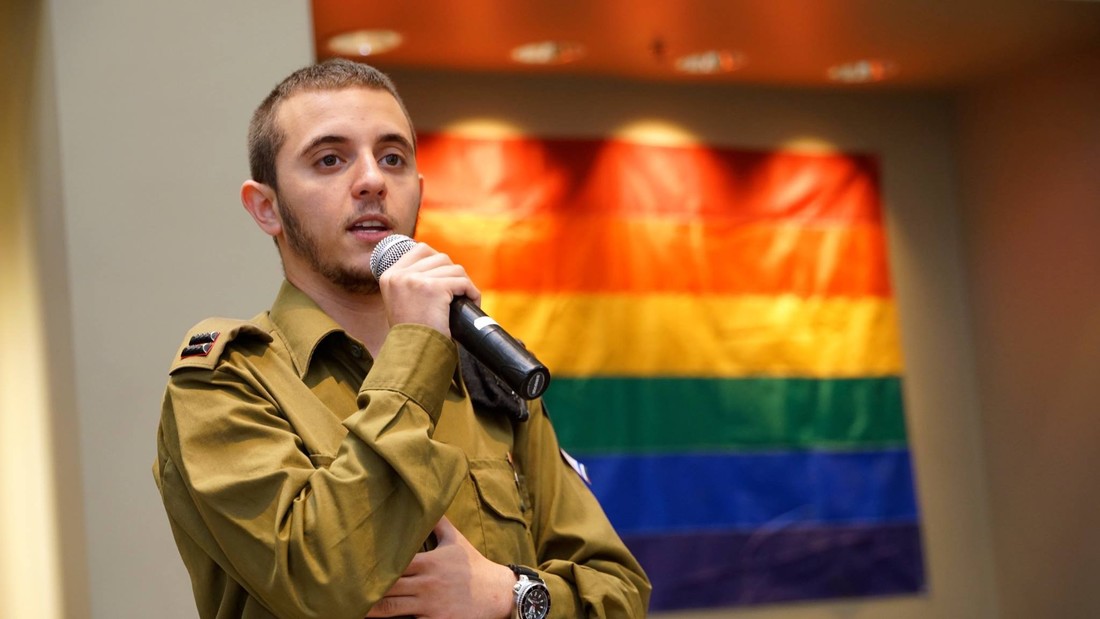 photo credit // facebook/congregation kol ami
Chicago, IL - A pioneer in Israel as that country's first out transgender military officer, Lt. Shachar, visited Chicago this summer as part of his week-long tour of the U.S. to speak to members of the LGBT community, members of the media, and to meet representatives from veterans for equal rights.

Lt. Shachar was impressed with the Windy City.

"It's an amazing city," he said. "Unfortunately I didn't have more time to see everything. I only was able to see what was close to my hotel and what some friends showed me."

Though in Chicago during the annual Pride Parade in late-June, Lt. Shachar did not attend – as a participant or spectator – due to security reasons, per Israeli military mandate.

"All of the city seemed to show pride," he said.

Lt. Shachar met Mona Noriega, chairman and commissioner of the Chicago Commission on Human Relations; and members of the American Veterans for Equal Rights (AVER) at the City of Chicago's annual "With Liberty and Justice for All" salute to LGBT veterans.

Lt. Shachar shared his experiences as a soldier and officer in the IDF at a breakfast hosted by the Consulate General of Israel to the Midwest. The breakfast was attended by representatives from Chicago's LGBT community, including Equality Illinois, A Wider Bridge, Center on Halsted, Howard Brown Health and others.

"It was a very busy, very emotional day, hearing others tell their story," on the Monday after the Chicago Pride Parade, Lt. Shachar said.

His Chicago appearance included multiple media interviews, including one with a reporter he had met a year earlier in Israel – and that reporter told Lt. Shachar that she fell in love with Israel last year and is now planning to move there. "That was crazy to hear and one of the most exciting (parts) of my trip – just to hear someone speak so highly of Israel. That was amazing," he said.

Lt. Shachar spoke about LGBT issues, particularly within the military, sharing his experiences in the IDF.

He has been out his entire military career, coming out on his own – with the aide and support of military leaders.

During officer training, Shachar realized that he must come out about his gender identity in order to have open and honest relationships with his fellow soldiers. Throughout his military service, with the help of his commanders in the IDF, he went through the unique and complicated process of changing his gender. His transition paved the way for the IDF to identify and implement specific policy changes and aid transgender and transitioning soldiers.

Lt. Shachar served in the behavioral analysis unit and is a project officer at IDF headquarters. He assists other transgender soldiers and is consulted by the military on transgender issues.

"When I tell my story, I always think it's too good to be true," he said. "The most difficult time I had (coming out as transgender) was in my head."

He told his platoon of 60 and welcomed, still.

"It was an important step (coming out as transgender), so we can work shoulder to shoulder," he said. But he added, acknowledging openly that he is transgender, "was one of the most stressful things I've ever had to do, but also the most perfect place I could imagine doing it."

Lt. Shachar said, "I did not know what to expect when I joined the military," but he's been accepted as he is since day one. "I was totally shocked; I never imagined that, he admitted.

Lt. Shachar is in his fifth year of service, with 4 ½ years of active duty.

On June 30, U.S. Defense Secretary Ashton Carter announced the lifting of a ban on transgender service in the U.S. military.

LGBT people have served openly in the IDF for more than 20 years, Lt. Shachar said. "We accept anyone for who they are and let them be," he said.

Lt. Shachar said that, when he came out, some military alongside him were curious and asked questions. "But very quickly, (those questions) faded and I just become, another officer.

"That was the most amazing feeling."