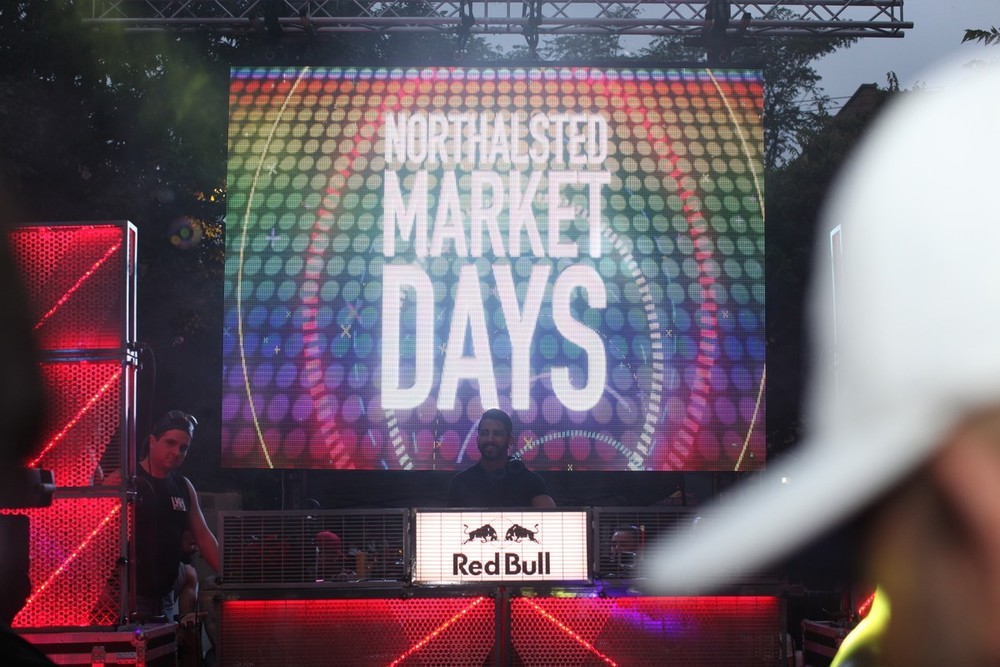 Your guide to the street festivals, stage shows and dance parties happening this weekend

Boystown is on display for Chicago this weekend as the six blocks of Halsted between Addison and Belmont transform to host the Midwest's largest two day street festival. For the 35th year, Northalsted Market Days is taking over a half-mile stretch of our already colorful and crazy gayborhood and turning it into the most highly-anticipated event of gay Chicago's year.

Market Days attracts a crowd of over 180,000 from around the world who come to celebrate Boystown, browse the unique vendors, eat, drink and dance to a variety of entertainment playing on four stages throughout the day. The bars and restaurants of Boystown will have their doors and windows thrown wide open for the biggest, best and most fabulous block party of them all.

Get ready for some fabulous stage shows from your favorite Boystown bars' booths, cool off with a frozen drink from Sidetrack, stop by Roscoe's lifeguard stand and say "woof" to CockyBoys very own Boomer Banks and make sure to play a game of dirty Twister over at Steamworks, because Market Days only comes once a year, and it's finally here.

The two-day street festival is known for attracting some of the best talent to its stages, with past performers including Jennifer Holiday, Gloria Gaynor and Olivia Newton-John. Performances by En Vogue, Salt-N-Peppa and more brought the crowds out last year and this year's performers will be no exception.

Returning this year to Market Days is R&B diva Deborah Cox, who lit up the festival back in 2014. The multi-platinum, Grammy-nominated artist was rocketed into superstardom in 1988 with the smash hit "Nobody's Supposed To Be Here." Cox has since conquered the R&B and dance charts, garnering her 11th No. 1 Billboard Dance single, "If It Wasn't For Love," in 2011. You can catch her Saturday night at 8:45 p.m. on the Belmont Stage.

Cox is joined by pop singer and Warner Bros. recording artist Jake Miller, a 23 year-old up-and-comer who recently started touring with mega-girl-group Fifth Harmony. The handsome Miller's new EP, Overnight, dropped on August 5 -- you can see him at the Nissan Road to Equality Stage (at Roscoe and Halsted) at 1:30 on Saturday. Also performing is Alex Newell, who came to fame playing the mtf character Unique on Glee starting in 2011, and is bringing his powerhouse vocals and dancepop to the Addison Stage on Sunday at 5:45.

A host of additional entertainment makes it's way to Market Days' four stages, including German dance duo Le Bouche, Chicago's own trans rapper Kaycee Ortiz and festival favorites like 16 Candles, Lez Zeppelin and many more. You can find the full lineup here.

"Market Days draws a national and international crowd to Boystown every year," said Christopher Barrett Politan, executive director of the Northalsted Business Alliance. "We look forward to welcome revelers for a weekend of great fun, terrific entertainment and celebration of the tremendous businesses that help create our iconic neighborhood."

The influx of gays and lesbians from across the nation also means the city will be alive with a host of fabulous parties where festival-goers can shake it after Market Days closes down for the night.

Kicking off Friday night is the latest in Neverland's series of high-concept theme parties: "The Imperial Harem." Billed as a mix between Aladdin and the movie "300," the over-the-top dance party will be taking over the 1,200-person concert hall Metro, 3730 N Clark. Don't miss the always fabulous set, costumes and show that Neverland is famous for and fantastic beats by international DJ/Producer Alex Acosta (Mexico City) and Alex Cabot (Chicago).

"Market Days is even bigger than Pride in Chicago so we're making this party more epic than anything we've done before," Anthony DiFiore, Neverland's founder and Creative Director, told ChicagoPride.com. "Today's Neverland is like a Studio 54-style party. What sets our team apart is that our artists are true set and costume designers who are working with Neverland to showcase their talents."

On Saturday, Aug. 8, Matthew Harvat (a.k.a. Circuit MOM) presents the latest of his large format Revolution dance parties, "Superhero: Resurrection" at the House of Blues. You can expect a dance floor packed to the brims with sexy, muscular men in spandex and capes for this already sold-out event featuring music by DJs Dani Toro and Nina Flowers and the first appearance by the legendary Circuit MOM at Market Days in 13 years! Don't fret (and don't be late) -- there are still 100 tickets available at the House of Blues box office on Saturday night.

And on Sunday New York's legendary Alegria dance party comes to the Windy City. Music by DJ Renato Cecin (Sao Paulo) and hordes of shirtless, circuit boys are taking over the Concord Music Hall, 2047 N Milwaukee Avenue, from 9 p.m. until 4 a.m. $60 tickets are still available online, while tickets at the door will cost $70. For tickets, information and more check out www.AlegriaEvents.com.

At the epicenter of everything, Boystown is sure to be raging all weekend long. Almost every bar and restaurant will be opening their doors early and closing them late, ready for the gayborhood's yearly festival.

On Friday night, Berlin Chicago kicks off the weekend with their 5th Annual Market Days Robyn Dance Party featuring DJ Greg Haus. Hydrate Nightclub has a weekend of fantastic music and dancing planned, with DJ Alyson Calanga on Friday night and DJ Grind bringing the beats on Saturday - plus a full weekend of music pumping from their outdoor stage at Halsted and Cornelia Ave.

Washington DC's Distrkt C Party is making a stop at Manhole this weekend as a stop on their Red Light party tour. Leather, uniforms, jocks, singlets and jeans are encouraged and DJ Manny Lehman is spinning,

The folks of the notorious Men's Room parties are taking over the combined spaces of the Metro and SmartBar, 3730 N Clark, for their "Oculus" party on Saturday night. Tickets are just $15 in advance or $20 at the door for this building-wide event offering music on two stages all night long.

If you've survived all that and the rest of the dance parties, drink specials and street festival debauchery (and, likely, can't sleep after Alegria), head over to Manhole for their returning Monday morning party, DayBreak. DJ Cindel (Chicago) and DJ Pride (Miami) will be spinning you reluctantly into the week from 7 a.m. to 1 p.m.

Get ready for Boystown's biggest and best weekend of the summer! The 35th annual Northalsted Market Days festival takes place on Aug. 13-14 from 11 a.m. to 10 p.m. The event runs down Halsted Street from Belmont to Addison. A $10 suggested donation is requested at the entrance. ChicagoPride.com is a proud media sponsor.