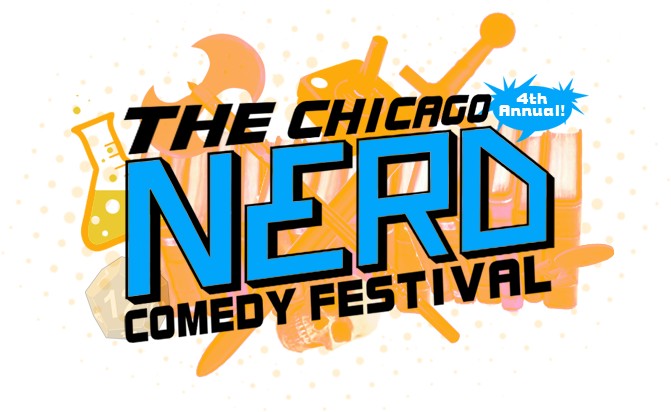 Don’t miss a host of comedy performances, panels and workshops this Thursday-Sunday

Just west of all the Market Days madness, Lakeview's Stage 773 is gearing up for a weekend of laughs with the 4th Annual Chicago Nerd Comedy Festival. The festival is adding a plethora of workshops and panels to their normal lineup of comedy performances, including a look at the intersection of the LGBTQ+ and nerd communities and headliner Jackson Bird, an activist with the Harry Potter Alliance and YouTube star who came out as trans last year.

"We're a super-inclusive festival, because a lot of the producers and board members of the past and present have found community and happiness in nerd culture and the sort of society that can come from being different from what is considered mainstream or 'normal' whatever that means," Cody Melcher, a member of the festival board, told ChicagoPride.com. "We're all about support, joy, and good times."

The festival's lineup includes a diverse array of comedy celebrating all things nerdy, geeky and fun. Sketch groups like The Stuntmen and Clown Car to Sicily will perform along with Plan 9 Burlesque, All Geeks -- an all-inclusive cosplay variety show started here in Chicago by Adam Guerino -- and returning festival favorites like Improvised Jane Austen and Improvised Star Trek (and also Improved Shakespeare). From British-panel style show Just the FAQs to comedy singer Matt Griffo, the weekend's activities offer a brand of nerd for everyone.

Team StarKid, an online sensation of which Darren Criss (of Glee fame) is a founding member, brings their musical comedy as one of this year's headliners alongside activist and Youtube star Jackson Bird. Bird rose to internet fame for his work with the Harry Potter Alliance, a nonprofit that turns online fandom into social action. Bird will be performing a live version of his popular "Will It Waffle?" YouTube series (in which he attempts to cook various things with a waffle iron) and is excited to breach the fourth wall and have the audience be able to actually smell what he waffles ("that's the biggest thing missing from the video version," he joked to ChicagoPride.com, "decent smell-o-vision can't come soon enough.")

Bird came out as trans in an honest, moving video last year. While coming out on the internet had it's own unique difficulties (such as the instant coming out to EVERYONE, from online trolls to his kindergarten teacher), he's received an outpouring of support from fans and members of the nerd community.

"The HP fan community and adjacent YouTube community that I've been a part of for several years is one of the most loving, inclusive, and pro-active communities I've ever seen," Bird said. "I'm so lucky to be a part of it. I had no fear coming out to them as trans... As far as trans people's experiences go, I've probably had one of the best overall receptions in the history books and I'm using that privilege afforded to me to try to help as many other trans people as I can – whether that means responding one on one to messages I get, signal boosting ways to act on anti-trans legislation, or continuing to make videos that educate people on trans people's realities."

In addition to his "Will It Waffle?" and participation in other performances, Bird will also be a key player in the workshops and panels that are being offered alongside the usual comic performances of the weekend. This is The Chicago Nerd Festival's first year putting together these six events, citing a desire to "foster a community through comedy." Workshops are aimed at folks interested in learning how to create their own comic books, do improv, or become a successful creator on YouTube. The three panels, in turn, will feature experts and community members discussing topics important to both the comedy and nerd worlds: one focuses on podcasts, another on building communities and the final panel is titled "LGBTQ+ in Nerd Culture and Media."

"As producer, I worked hard to make sure we included as many voices as possible in the festival itself, and so when looking at panels we wanted to include on Sunday, I wanted to address some aspects of nerd culture and media that can often be overlooked by mainstream culture, but is definitely not something that is overlooked by someone who—like myself—identifies as both queer and a nerd," Melcher said. "I will be moderating a panel of fantastic people who come from completely different perspectives and backgrounds both in terms of their personal identities and their experiences with nerd culture and media and I think there will be something to be learned by every single person in attendance. As moderator, I myself am definitely excited to talk to our panelists."

With over 20 total performances, workshops and panels between this Thursday August 11th and Sunday the 14th, you don't want to miss this year's Chicago Nerd Comedy Festival. Tickets for individual events start at as little as $10 and attendance to any of the three aforementioned panels is free! One Night Passes are available for Thursday through Saturday and true nerds can even purchase an inclusive All Festival Pass for only $75. The shebang takes place at Stage 773, located at 1225 W. Belmont, just west of Racine.

To buy your tickets and find more information on all of the weekend's performances and performers, check out https://gopride.com/Zcm4 and RSVP to their Facebook page.

"The unifying factor of The Chicago Nerd Comedy Festival is always about fun with your community," Mecher said. "What we look for in shows, panelists, workshop teachers is the idea of using comedy to build up rather than tear down and creating a fun and exciting experience for all participants on both sides of the stage. It's all about belonging and joy. That's the core essence of The Chicago Nerd Comedy Festival as it should, frankly, be the core essence of all things."