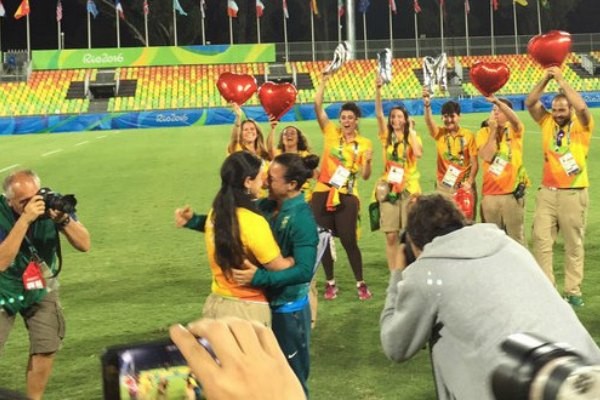 Out rugby player Isadora Cerullo and her girlfriend got engaged on Monday during the Rio Olympics.

The proposal took place at Deodoro Stadium as the crowd was dispersing after Australia won the women's rugby sevens gold.

According to BBC Sport, Cerullo's girlfriend of two years, Marjorie Enya, entered the pitch and asked Cerullo, who is on the Brazil squad, to marry her.

Enya, 28, made an emotional appeal, to which Cerullo answered yes.

"As soon as I knew she was in the squad I thought I have to make this special," Enya told BBC Sport.

"I know rugby people are amazing and they would embrace it."

Cerullo, who is also a U.S. citizen, moved to Brazil to focus on making the squad. The couple live in Sao Paulo.

"I wanted to show people that love wins," Enya added.