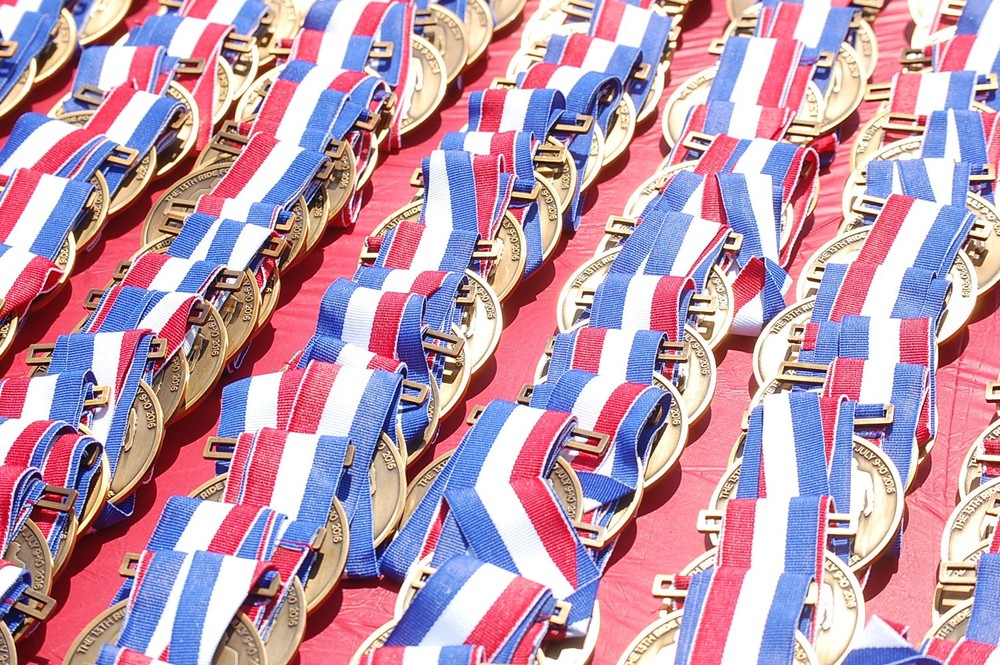 photo credit // anthony meade
view the full gallery
Chicago, IL - Some of the fastest riders finished the first 100 miles of the 200-mile Ride For AIDS Chicago on Saturday, July 9, at about 2:30 p.m., and Matt Liberatore crossed that finish line to the first half of the event about 30 minutes later.

Liberatore and others relaxed, changed clothes, showered and re-energized with a feast of food and drinks.

The camp of accomplished, proud, smiling, and no doubt sore riders continued to grow over the next couple of hours. Then, at about 5:30 p.m., word spread that the final two riders were approaching the finish line. En masse, every rider and crew member stopped what he/she was doing, went to the finish line to cheer home those last two riders.

First or last, fastest or slowest, that doesn't matter in the annual Ride For AIDS Chicago. This was one super-sized family cheering, hugging, supporting two of their own, an impromptu welcome-wagon parade, filled with high-5s, hugs, and of course tears,

The moment was magical, the memory will linger forever – for those two riders and certainly all others too, both riders and crew.

"It was unbelievable to see the faces of those two riders," said Liberatore, who completed his second-ever Ride. "Your time (needed to complete the first 100 or the overall 200 miles) doesn't matter; it's all about finishing.

"And that moment, perhaps more than any, showed that the Ride For AIDS Chicago is not a personal ride, but rather, a ride together."

That moment "truly speaks to the Ride," Liberatore added.

Rob Garofalo – a five-time Ride finisher and the captain of Team Fred, named for his dog, Fred – said that "it didn't matter who the last riders were," Garofalo said. "Everyone was focused on making sure those (final riders) had as special of a ride as anyone else," regardless of their finish time.

This year's Ride, the 13th annual, featured 190 riders going 200-miles – and all completed the 200 miles. This year's route was maintained by 24 mobile road and medical crew cars, providing assistance to riders – and 80 individuals on the crew. There also were 12 participants in the inaugural 100-mile Ride – and all 12 completed those 100 miles.

This year's Ride featured 70 first-time Riders, including all 100-mile riders.

The Ride also this year featured HIV-positive riders and crew members proudly wearing orange bandanas to signify their status. And, as has become one of the most magical, emotion-filled moments of the two-day extravaganza, HIV-positive riders walked a rider-less bike into the Opening and Closing Ceremony to honor those lost to HIV/AIDS. Mark Williams and Shane Rasmussen of Team Touché shared the honor of riding with a large orange bandana-patterned flag attached to their bikes.

The Rider-less bike was led by Joseph Forbes, Carmen Sapien, Lupe Cotto, and Michael Herman at the Opening, and James Craig, Mark Williams, Greg Haggen and Kelly Southard at the Closing. Sapien and Cotto walked in honor of their brother-in-law, Alfredo Cotto.

The Ride, run by the Test Positive Aware Network (TPAN), raises funds for HIV services and is the Midwest's only back-to-back century ride. The Ride is committed to providing essential services to people living with and vulnerable to HIV and AIDS.

Sue Broverman, a first-time rider, former crew member and crew captain, said the Ride is "one of the most rewarding experiences that someone can do. The support and community that is on the Ride is unlike anything else."

Patrick Lannon said the most meaningful part of the Ride is the community-building before the Ride, particularly on his team, Team Cheetah. "Just getting to know people and work (together) for a common good, a common cause," was amazing, memorable.

Garofalo said, "It was an amazing Ride, always is, yet this year was extra special."

He added, "There are people involved with the Ride from so many (different) walks of life, which makes this one of the most special events that we have here in Chicago. There are so many people who do the Ride who I know I never otherwise would have had the opportunity to meet and be part of my life. That really makes the Ride special."

"They are not part of my professional (world), or socially, yet they bring it every year on this Ride. And I probably never would have met them, if not for the Ride," Garofalo said with pride.

And yes, Garofalo has already registered to ride once again in 2017. And Fred will be there, too, just as the friendly, furry mascot was throughout the two-day event.

"I really was overwhelmed with the riders and crew this year, which was filled with all ages, races, ethnicities, sexual orientations, etc. And everyone came together for a common cause.

"With all of the turmoil in the U.S., from Orlando to Dallas and elsewhere, the Ride seems to supersede all of that and people truly come together."

Forbes -- who completed his third Ride, and was riding in honor of an uncle who died from the disease in 1994 – said the diversity of the riders and crew is special, so meaningful because all join together for one cause. "We've each personally been affected by HIV/AIDS in some way and we're doing what we can to make a difference," he said. "Not only do we raise money in support of the services that TPAN provides, but, we also raise awareness and help fight the stigma attached to HIV/AIDS."

Meg Valentini, who cycled with her husband, Fred, said the 2016 Ride was as smooth and as memorable as each they have ever done, dating back years. She also was emotion-filled, teary-eyed on both days, especially when she welcomed back riders and presented the finisher's medal to many, placing it around their neck. "That was so exciting. To see the rider's faces, with that true sense of accomplishment, was fantastic; I loved that (moment)."

Liberatore added, "To know that through the blood, sweat and tears we endure (on the Ride) will save or assist someone, that means so much."

And Liberatore truly means it. He wrecked at about 180, yet didn't think for one second about stopping. He was going to finish all 200 miles, regardless – and has a bandage on his face for celebratory photos, truly a badge of honor and pride.

Star-gazing: Congresswoman Jan Schakowsky spoke at the Opening Ceremony. Congresswoman Tammy Duckworth wrote a letter that was read at camp. Alderman Ariel Reboyras (30th Ward) completed his 11th Ride and presented TPAN CEO Patti Capouch with a copy of the resolution passed by the Chicago City Council on June 22, recognizing the Ride. Sean Lewis from WGN-TV was the MC at the Closing.

Donations for the 2016 Ride are still being accepted online.