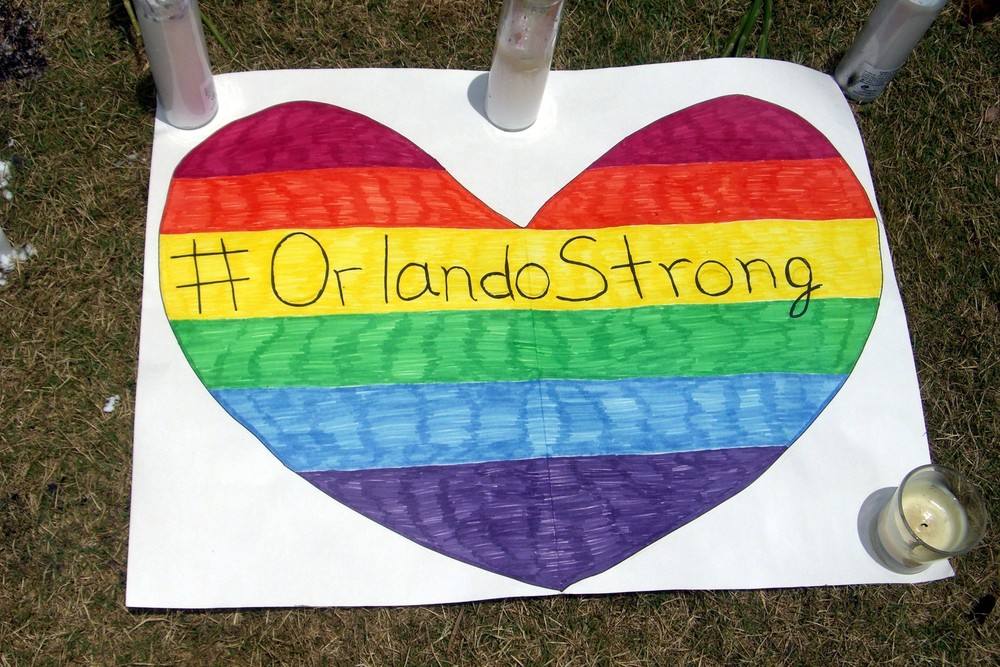 Chicago writer pays tribute to the 49 slain, 53 injured along with hundreds of others

Orlando, FL - The saying dates back more than 100 years – A Picture Is Worth A Thousand Words.

And though it can be hard to admit as a writer, it certainly was true on Monday, June 20, when I was in Orlando, Fla., to visit multiple memorial tribute areas to the massacre in the early morning hours of June 12, when a lone gunman opened fire inside Pulse Nightclub. After about three hours of terror, 49 patrons of the gay bar were killed, plus the gunman, and 53 others were injured.

A little more than a week had passed since the bullets finally stopped flying, but the tears were still flowing.

Flowers were everywhere, candles too. Flags were plentiful – the U.S., the Puerto Rican, and the multi-color Pride flags.

I first went to Lake Eola where, less than 24 hours earlier, a candlelight vigil attracted about 50,000. The crowd was gone, but not the overflow of love, including candles left to spell the word LOVE. Tens of thousands had written personal notes of support, whether the writer knew an injured or slain Pulse patron, or was simply showing support. Posters carried moving, emotional messages.

I saw at least five different areas around Lake Eula that had memorials to the victims. It was emotional.

And that was just the start of an emotional journey on a sun-drenched Monday afternoon.

Next, I went to Dr. Phillips Center For The Performing Arts, where the tributes were bigger, bolder, seemingly more touching, if possible. There were more candles, more flowers, more flags, more hand-written messages/posters of loves ... and definitely more tears.

Visitors to the Dr. Phillips area ran the gamut – old and young; Black, white and Hispanic; locals and visitors. I saw clergy, a gang of grieving motorcycle riders in black vests. There were parents with their young children, who likely won't truly understand or comprehend the horrors of that early morning in downtown Orlando for years to come.

Finally, I went to Orlando Regional Medical Center, where victims were treated, were still being treated, and where 49 hand-made, 3 foot-tall crosses stood. They were made in Illinois, driven to Florida, and now are a glorious tribute to those who passed. More flowers, more candles, more balloons, and more personal hand-written messages of love. There were teddy bears, t-shirts tied to victims' past, even a doctor's stethoscope for one victim.

I watched the family of one victim bring floral wreaths to honor their beloved relative. They posed for photos by his tribute; they prayed; they hugged each other. He was 25.