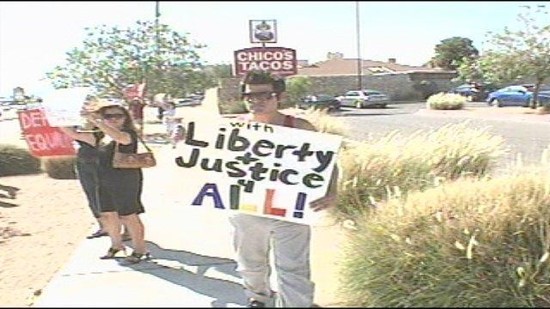 photo credit // www.kfoxtv.com
El Paso, TX - About 50 gay activists protested Friday outside the restaurant where two men were asked to leave because they were kissing. The activists say they are not protesting the restaurant but how the police handled the situation.

The men say security guards at Chicos Tacos, a Mexican fast-food chain, in El Paso, Texas asked them to leave the restaurant Sunday night because two of the men had been kissing.

"We went, sat down to eat our food and security guards came and said that if they kept doing that, they were going to throw us all out of the restaurant," Carlos Diaz de Leon, one of the men involved in the altercation, said.

"They said 'We don't allow that gay stuff to go on here'," he added.

When asked for comment the security guards said the men were behaving loudly. A claim the men deny.

The men then reached out for help from the El Paso police department. Officers arrived on the scene about an hour later and falsely claimed that the men were breaking the law and threatened to cite the men.

"[The police] told us it was against the law for two males and two females to kiss in public, that they could cite us for homosexual activity," Diaz de Leon said.

The Supreme Court struck down laws that prohibit being gay, including laws that would ban public displays, in 2004. Additionally, an El Paso city ordinance bans discrimination based on sexual orientation.

A police spokesman said the state's ban on homosexuality remained on the books, but added it was no longer enforced.

At the protest, supporters created some noise as they held up signs that read "Honk for Equality" in the scorching 100-degree desert heat, kfoxtv.com reported.

The police department initially attempted to pass off the threat of citation as a rookie mistake, and not discriminatory in nature.

"Did he make a comment that he shouldn't have made?" Chris Mears, an El Paso police department spokesman, said. "Yeah, he did … but that comment I don't think was discriminatory in nature. I think it was poor understanding of the law."

A couple of days later, however, the department was striking a more conciliatory tone, but has refused to apologize.

In a statement offered to the press, the department said it recognized "the negative impact that discrimination can have on a community," but the statement did not recognize the gay, lesbian,bisexual and transgender community, opting instead to address the issue with broad strokes.

The men say they have filed a complaint against the police department.