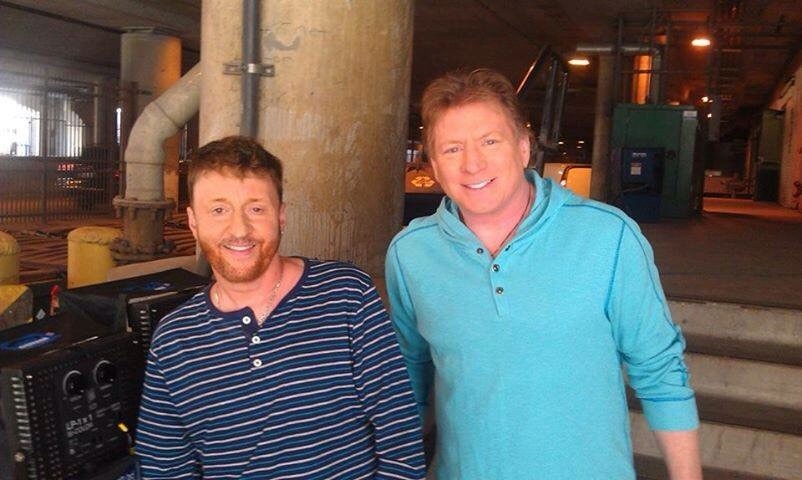 Eddie Volkman – or Eddie V, as he's long been known – has worked as an on-air radio personality since 1980, most notably as one half of the mega-popular Eddie & Jobo Show, along with Joe "Bohannan" Colborn, which aired on B96 here in Chicago from 1986-2008. Volkman then worked at both WLS-AM and "K-HITS" (WJMK-FM) until 2013.

The Chicago radio veteran is returning to the airwaves. Starting June 6, he'll host from 4 to 7 p.m. weekdays on WCKG AM 1530, the west suburban talk station. Volkman, who most recently has been podcasting for the Radio Misfits Podcast Network and teaching at Illinois Media School, is one-half of the iconic duo of Eddie & Jobo (with Joe Colborn). "It's a great chance for me to show my own personality and establish an individual identity," Volkman says.

The son of the late, legendary Chicago weatherman Harry Volkman, Eddie V is also a Chicago broadcasting icon. Sure, he's also worked at radio stations in Tulsa and San Francisco, but Chicago is where Eddie V shines brightest.

Eddie Volkman still recalls, with pride, that he was part of the first radio or TV station to participate in the Chicago Pride Parade.

He's fairly certain it was in 1992, and the chain of events leading up that parade definitely were fascinating, he said.

"Mark Wahlberg had been enjoying pop star success with 'Marky Mark and the Funky Bunch' and (he) had made a surprise, late-night appearance at (the now-closed) Vortex Nightclub in Boystown," which was at 3631 N. Halsted Street in Boystown, Volkman said. "(Wahlberg) usually performed shirtless and had quite a following of both men and women – and we talked about it the following morning on The Eddie & Jobo Show."

They also took a few calls and reviews, and remarked how cool it was of Wahlberg to acknowledge fans of all sexual orientations.

The radio DJs then got a call from the manager of Vortex, who Volkman said was flattered that the station would give the club and the gay community that type of favorable exposure and acceptance.

But, it really shouldn't have been a surprise. The mantra that Jobo threw out on a daily basis was, "Doesn't matter if you're black/white, young/old, gay/straight ... "

"We lived by that ethic," Volkman said.

The Vortex manager invited the popular pair to host a night at the club, but B96 management had imposed a ban on Jobo hosting bar-type events, Volkman said.

But not Volkman. "I often hosted nightclubs and was flattered and honored to be asked to do this one," he said. "Our very liberal-minded, forward-thinking program director, Dave Shakes, suggested an 'All-B96' appearance to show unity. It was an amazing night.

"B96 was already a favorite in the gay community, as we found out. A lot of the club music was what we played on the air and in our 'street mixes.' Patrons at the club were incredibly appreciative and enthusiastic and treated us like rock stars. I was thrilled and flattered.

Shortly thereafter, parade organizers asked them to participate in the parade, "and we happily accepted," Volkman said.

(Ultimately, it was just Volkman who participated in the 1992 parade, not Jobo too.)

Decades later, Volkman said the highlight of that 1992 parade was "just being asked" to participate.

Volkman said the parade crowd cheered loudly at every stop and turn, with only a smattering of disgruntled people that day, mostly individuals who lamented the commercialization of the event, he said. "I had a microphone atop a platform float with B96 banners and music mixes playing," Volkman said. "I thanked people all along the way and interacted with the crowd. We threw out shirts, hats and other B96 swag, which always makes people happy. Mostly I feel people were happy to be treated with dignity and acceptance, something I think was lacking in the media just a couple of decades ago.

"People were thrilled to have us and we were just as happy to be there. I spoke with lots of parade-goers afterwards and even went to a few bars for a few drinks."

Being the first radio or TV personality/station to be in the Chicago Pride Parade "was and is still an honor, particularly because we were asked—we didn't ask to be in it to further our demographic appeal or to show acceptance or all the other BS reasons which followed when all the other TV and radio stations got on the bandwagon," he said.

Volkman wasn't just a one-and-done in the Chicago Pride Parade. Hardly, in fact. He has been in about 10 and even brought his then-11-year old son on the float in 2005.

"As scheduling would have it, a number of years the parade was on the same day as the B96 Summer Bash, usually held at Toyota Park in Bridgeview, so we would have to scramble from the end of the parade to get to the concert in time. It was always a long, but rewarding day," Volkman said.

Volkman has also attended one Pride Parade as simply a spectator – "when my wife was selected by MGM Pictures to play the role of 'Elle Woods' for the promotional float for Legally Blonde 2," he said. "She bore such a resemblance that she was stopped for autographs multiple times along the way and some people insisted she was lying when she told them she was not Reese Witherspoon. The movie company made a video of the entire parade route which shows a reseller snatching the fake Chihuahua from my wife's purse! She walked about six miles in heels and had blisters (afterward) for weeks."

Volkman said he's planning to attend the 2016 Chicago Pride Parade with his wife and almost 5-year old daughter. "She's a little budding Shirley Temple and might need her own float," he said.

The 2016 Chicago Pride Parade, which now brings more than a million visitors to the Uptown and Lakeview neighborhoods of Chicago, is slated for Sunday, June 26 starting at noon. (Pride Parade info)