New book 'Why Drag?' spotlights some of the nation's top drag stars 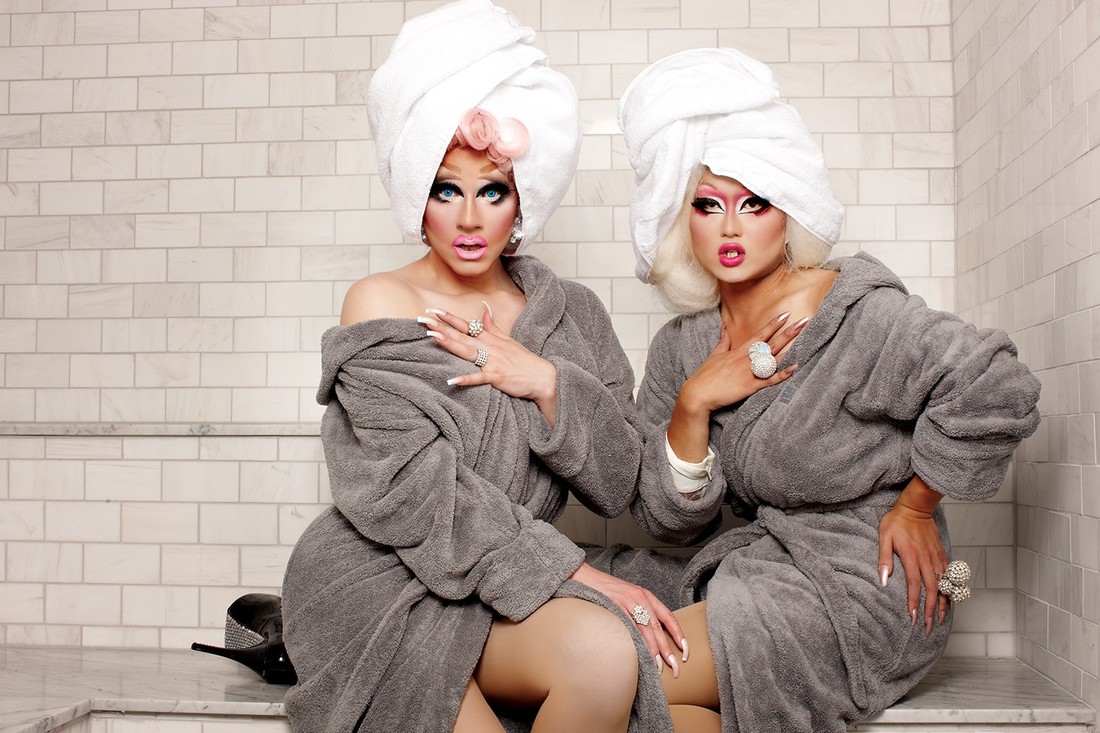 trixie mattel and kim chi in magnus hasting's 'why drag?'

A new book from Magnus Hastings is 10 years in the making – and filled with 141 photos of 130 drag queens from across the U.S., including some Chicago flavor.

"Why Drag?" will be released May 17 from Chronicle Books and will be available from all major booksellers.

Hastings, 42, is a Los Angeles-based photographer whose eye behind the camera has generated this 224-page book, which includes many two-page images.

"I wanted it to be as expansive as possible, to feel like you enter another world," Hastings said. "I have wanted to do a book of my drag photographs for many years; (that's) my genre; I just get it and it makes total sense to me.

"I toyed with the idea as long as 10 years ago, but got side tracked with other work. It wasn't until I moved to Los Angeles and was right in the middle of the drag scene that it happened. It was quite organic, really – I reconnected with my longtime drag muse, Courtney Act, and through her met a lot of the drag racers. I started my Facebook page (named) 'Dragged around the world' (and it) took off fast, (so) I just threw myself back into it because it makes me happy.

"I got myself a show in New York which received a lot of attention and from that I was picked up by a literary agent which led to a book deal."

Hastings ultimately spent two years on the book, traveling across the country, which he said, "is kind of how I love to work – just creating my own art, jumping on planes, meeting new people and thinking on my feet."

Hastings often had an original plan for the photographs, but that regularly changed.

"I would use bathroom floors, showers in hotels rooms, bus stops, train tracks, anything I could find – and that is exciting to me and (it) gives the book a lot of energy," Hastings said. "When I first got an actual copy of the book, I did sit down and think, '(Wow), that is a lot of work – I am almost exhausted looking at it.'

Hastings already has plans for a second similar-themed book, eventually.

The first queen who Hastings photographed was Vanity Faire as Dorothy, "which is still perhaps my favorite image I have ever taken – of a queen or anything else," he said. "The last photographs were of Naomi Smalls (as his) deadline had (passed), but I met her after being tipped off she was (going) to be on RuPaul's Drag Race and fell in love immediately, so I did an emergency shoot and begged my editor to include her.

"To be honest Chronicle (has) been beyond amazing, listening to my vision and helping me to achieve it. I feel like I haven't really had to compromise at all; they just get it."

Hastings' noted photo of Vanity was snapped 11 years ago and "so much has changed" since then, he said. Still, that photo "is one of about four that were from a long time ago, but were important to me and needed to go in (the book)."

"When I first started, I would only use and manipulate natural light, but now I tend to mix natural with added artificial light, so I have more control. I still love natural light, though," he said.

Landing in Orlando, Fla., was "an eye opener," he said. Hastings stayed at The Parliament House on Ginger Minj's recommendation and it was fun for a night, he said, "but I was there for three ... and it was (and still is) one of those old-school gay 'resort' hotels, (so), if you dared to open your curtains, within a minute there would be an eager face rubbing his crotch and pressing his face against the window. So, my curtains stayed closed."

Hastings said his photo-shoot with Sharon Needles was "crazy." It was in New York City and just before the Drag Race season 6 launch party. He had about 20 minutes in Sharon's hotel room to get a shot, and yet the room was the size of a rabbit hutch. "I had to improvise, which entailed dragging my trusty pop up background into the T junction of the corridor, thereby creating a fire hazard and strapping Sharon into a strait jacket, (and) then just clicking away about 20 frames before security could come and move me. My assistant was Asia Persuasia, who was great when she wasn't in drag, but that day she was in Asia mode as we were going straight to the launch, so (she was) pretty much useless. So, while I was doing this job and packing up the equipment and lugging it down the stairs, she was off smoking with Sharon."

Hastings came to Chicago in the fall of 2014 – and has photographed Trixie Mattel and Kim Chi, as well as Sal-E and JoJo Baby, among others.

Hastings' book features Heklina, Sister Roma, Peaches Christ, Lady Bunny, and others. Hastings said he hand-picked the Drag Race queens who he wanted in the book, but he was adamant that Why Drag? would not just be all Drag Race stars.

"It was important to show the diversity of drag and the artistry," he said.

So who are your top three queens spotlighted in the book?

Hastings hesitated, noting how difficult that question would be to answer.

"I love so many of them and now have friendships with many, so (selecting just) three is not enough," he said. "People are important for different reasons. (For instance), Sister Roma is very special to me and The Sisters of Perpetual Indulgence. They have done so much for gay rights, (so) they had to be in it. Lady Bunny is a legend. Courtney Act has been my muse for years and was instrumental in me coming back to drag and starting on this path once I landed in Los Angeles. Bianca has been amazing and is very special to me. Glamamore is very special, too.

Hastings added, "I wanted to take the (readers) on a trip to wonderland as seen through my eyes; it is my world and the place I belong. I learned a lot of things (while producing the book, such as) shooting in cramped spaces or in the street within a five-minute window.

"For those who are tired of drag or (think) it's just men in wigs, I think this (book) showcases drag as art and the vast spectrum that drag covers. I am really proud of (the book) and the reaction so far has been phenomenal."

And when asked, 'Why Drag?' Hastings simply replied, "because it's home to me."