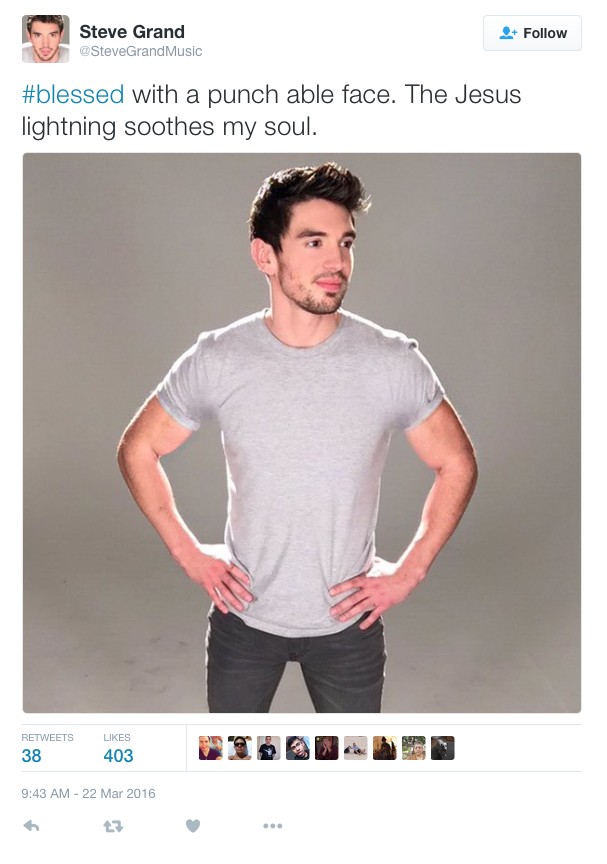 photo credit // twitter
Chicago, IL - Chicago-area native and out singer/songwriter Steve Grand is responding to criticism after a quote from a recent interview created an online uproar.

Describing himself as a "weird guy trapped in a douchey gym guy's body," Grand told PrideSource, "I'm such an easy person to target. Young, good-looking, white gay men - we love to hate those people. But there's been a real person there the whole time."

That statement immediately garnered quite a bit of negative attention online.

"Grand's comment was highly problematic because it undermines harsh realities that consistently pervade marginalized communities, in particular gay, Black men and trans women of color," columnist Terrence Chappell told ChicagoPride.com. "Gay, Black men still don't have proper access to HIV programs and services, putting them at more of a risk to contract HIV. Trans women of color are still targets of a lot of hate crimes. Twenty-two transgender women were murdered in 2015, 19 were trans women of color."

Grand has since taken to Twitter to offer a response.

"Sometimes, from my narrow, fallible perspective, it SEEMS we evaluate others more or less critically based on how much privilege they are perceived to have. Fair or not, right or wrong, this is what I OBSERVED, and what I was speaking to in that one part of a long int[erview]," tweeted Grand. "Not everything has some implied value judgement attached to it, dontchaknow?? Sometimes we just shootin the shit."

Grand also tweeted a photo with, "#blessed with a punch able face."

During the interview, Grand also opened up about whether he'd ever bare all for the cameras.

"I'd rather not. But if someone was like, 'Here's a million dollars,' I would be like, 'Sure,'" he said. Noting that his manhood was already visible in earlier photo shoots, he added, "I don't think my dick is that exciting. It's just like, whatever. It's pretty unremarkable. ...It's very appropriately sized and shaped, that's what I would say."

The 26-year-old Grand burst on the scene in 2013 with his self-produced All-American Boy, which tells the story of a man's unrequited love to another man. The video immediately went viral on YouTube.