Now Playing: The former Gentry on Halsted piano – by two pre-teens in the suburbs 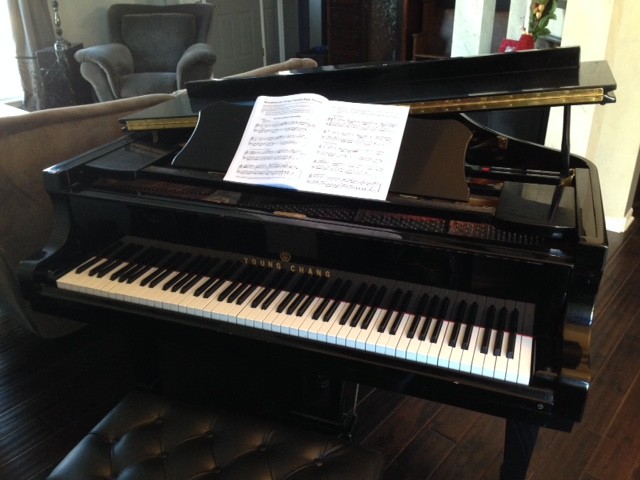 the former gentry on halsted piano at home in suburbs.

A large piece of Chicago's gay history is sitting in suburban Geneva, Ill., safe and sound ... with the key word being, sound.

Before Scarlet opened in Boystown in December 2007, it was a much-quieter bar known as Gentry on Halsted – and it featured a piano, which showcased the handy work of the late Rudy de la Mor, among others.

That piano is now owned by Pat and Nicole Finn, a husband-wife duo that lives in Geneva, and their sons are masters on the keyboard.

Cannella was talking with a college buddy, Pat Finn, who called his wife to discuss the piano. Cannella also knew her from college, and they agreed to take the piano.

"The Finn's hired a professional moving company," Cannella explained. "It was pretty cool to watch them come in, take it apart, pack it up and wheel it out. After it went to their house, it was professionally cleaned and tuned. It had a lot of miles on it, not to mention quite a few drinks.

"We had it tuned a few times and the person told me that it was on its last legs. But, as you can see, nine years later ... she's still going strong."

Brothers Cooper and Hunter Finn are regular piano players. Cooper, 11, has been playing for 3 ½ years. Hunter, 8, just started playing last summer. Both of the boys love to play, said their mom, Nicole, "and Cooper has even written a few original pieces, (including) lyrics," she said.

Cannella has shared videos of the two playing the piano on social media.

"Over the last few years, I've posted videos of Cooper playing it," Cannella said. "(It) was a total shocker to see both (Finn sons) playing the Gentry piano. I have to say, I was grinning from ear to ear watching that (video). To see my friends' kids growing up, being so talented, and then to think about all the good karma that so many people receive knowing it lives on was amazing. I honestly felt proud I was able to help play a small role in keeping the spirit alive.

"There's no doubt that that piano is a part of Chicago history. I think it represents the living spirit of Gentry, David Edwards, the former owner/founder, and everyone who has played on it. I think when people saw my post with the video, it struck up a lot of emotions for people to remember a nice time in their lives."

Cannella said he personally sees the piano every couple years, and he still doesn't know how to play. "I've said that if I could pick one (musical) instrument and instantly be able to play it, the piano would top the list," he said. "I've always been fascinated by Liberace and Elton John when they are in full stride."

Cannella said he's rarely asked about the piano's whereabouts. But, when he posts online videos, it triggers replies, such as, "So that's where it went," or, "Glad to see it went to good use," or, "If that piano could talk..."

Ironically, when Cannella renovated Queens Tavern and Bistro into Taverna 750, which he also owns in Lakeview, they removed a piano from there, too – and that piano was donated to a funeral home that had donated services to folks that had passed away from HIV/AIDS, Cannella said.

"I swear, I'm not anti-piano and hopefully my efforts to save them afterwards proves that," Cannella said, laughing.

Cannella added: "I look forward to seeing the (Finn) boys get better and better at playing it. Who knows, maybe we'll see them in concert one day, and (then) be able to thank David Edwards and Gentry. Either way, their skills will provide a lifetime of joy for themselves, their family, me, and everyone as future videos are released."

Nicole said their family is "so lucky" that Cannella thought of them when he was looking for a new home for the Gentry piano.