Peter LaBarbera: Christians should not support Donald Trump because he attended gay wedding 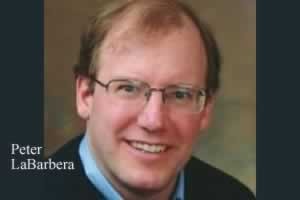 Anti-gay activist Peter LaBarbera said Friday that Christian conservatives should not support Donald Trump's presidential campaign because he once attended the wedding of a gay couple.

Fisher agreed, saying that the "proper Christian response" to a gay couple's wedding is "grief and sorrow."

"If you have a biblical worldview, you'd be grieved for them," he said. "You'd be grieved for what they're heading into, grieved for the way in which homosexual behavior separates them from God, the risks that it's putting them at, the risk that it's going to put children to if they're adopted into that household. So the proper response would not be joy, it would not be celebration; the proper Christian response would be grief and sorrow over what these two people are doing to themselves and also to others."

Polls show Trump leading in Iowa among Republicans as the state kicks off primary season.