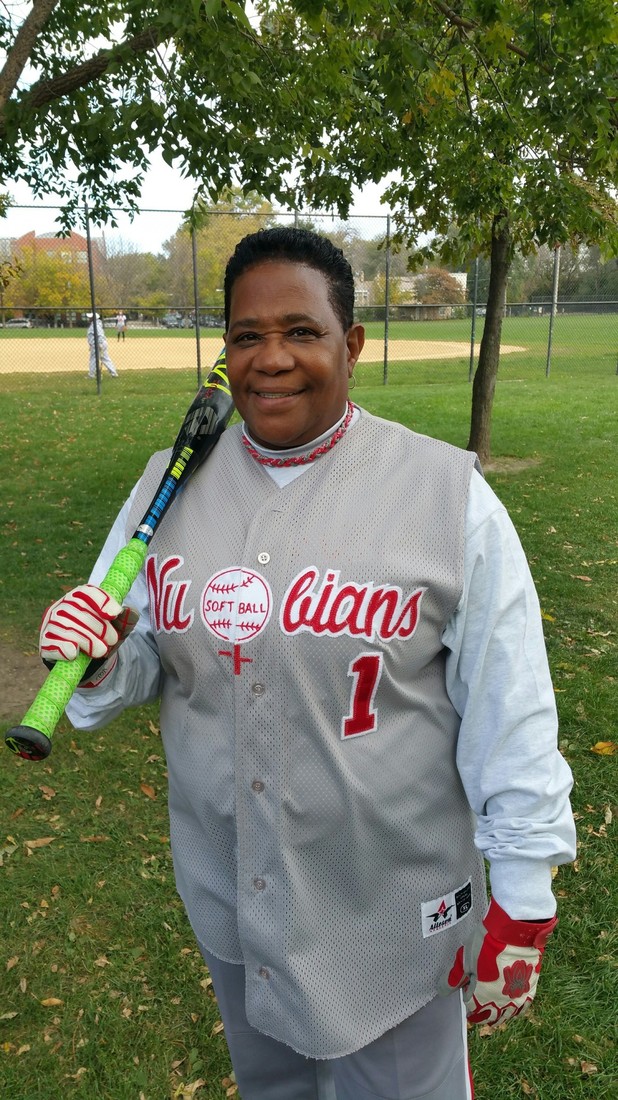 Chicago, IL - The last hits, runs and errors of the local softball season will be in November, though the chilly temperatures mean players often are bundled up in layers as they wrap up the annual Women's Fall Softball League, played at Pottawatomie Park.

The days of shorts and just a team jersey won't be back here until next spring.

The Women's Fall Softball League features such teams as this season's powerhouse known as Knock1Out, along with the Diesel Daises and Raw Energy. Another noted, tradition-rich team is The Nubians, which boast sisters Anita and Berna Whiteside – who are Twin 1 and Twin 2, respectively, on the back of their jerseys.

Berna is primarily a pitcher; Anita also pitches and spends time at catcher, too. Anita often coaches the team as well.

"My first love is basketball, but softball is my second love," said Anita, 61, who was born and raised in Chicago and works as a supervisor. "I seem to have excelled at softball. I have played, coached and taught it ... all for the love of the game."

Anita started playing softball years ago in her neighborhood and continued through school. She later played in a league at Washington Park on the South Side. She has won three championships and was on a bronze medal-winning team in the Gay Games.

"I'm having fun, enjoying softball, the game itself and just being together with a group of ladies who enjoy the game as well, just as I do," Anita said.

Anita said playing alongside Berna is "exciting." She said the two often long competed against each other as each always wanted to be the best, better than the other – and that continues today. They, for instance, will play one-on-one basketball, just for bragging rights.

"Playing with her (as a teammate) has been a real joy," Anita said.

Anita and her Nubians teammates represented Chicago at the annual ASANA World Series, held in mid-October in Orlando, Fla. The Softball World Series run by the Amateur Sports Alliance of North America brings together teams from 24 member cities from across the U.S., and has been held for women yearly since its inception in 2005.

The Nubians struggled in the tourney this year. They lost back to back games in round-robin play and, well, were eliminated.

"Going to the World Series gives you the chance to play against women from all over and just people who, in all likelihood, you never would have met," Anita said. "It's just a fun overall event.

"Sure, the team didn't do as well this year as we had hoped, but going to it was fun nonetheless."

When asked how much long she plays to stay active on the softball fields before, no doubt, simply being the team's coach, she said he doesn't have a time-frame set before she hangs up her glove for good. "As long as I'm healthy," she plans to stay playing, she said.

Marcia Hill, who has been active in Chicago's gay sports scene since the early-1980s and is a member of the Chicago Metropolitan Sports Association (CMSA) Hall of Fame, said Anita has contributed "a lot" to CMSA's women's softball and basketball leagues.

"Anita is a very passionate female athlete who has strived to do her very best every game and expects the same from her teammates and officials," Hill said. "CMSA could use a few more women with her passion to help mentor some of our younger athletes to teach the game, coach the game and make those around themselves better not just on the softball field or basketball court, but in life. Thank you Anita for all that you have done with CMSA's women sports."