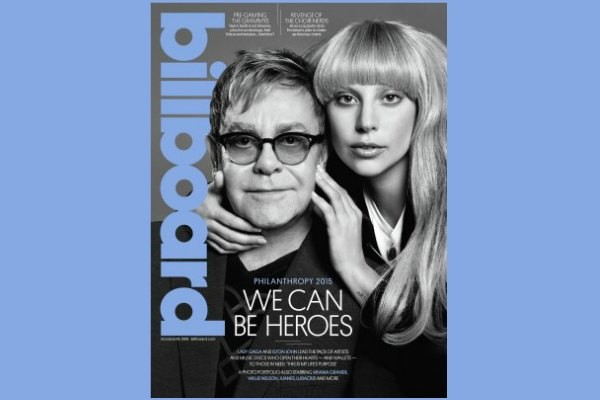 Chicago, IL - This week's Billboard, on news stands tomorrow, features an op-ed written by Elton John on fighting AIDS and an interview with Lady Gaga, in which she discusses saving trouble teens through her foundation.

Around the time Born this Way was released in 2011, 14-year-old Jamey Rodemeyer committed suicide after being bullied for coming out gay. In a heartbreaking It Gets Better video, Rodemeyer reached out to struggling gay teens. "Lady Gaga, she makes me so happy, and she lets me know that I was born this way. ...Just love yourself and you're set," he said shortly before his death.

"When that album came out, Jamey heard pieces of it and was posting about it on the Internet, but unfortunately, he was already in that very deep dark space," Gaga told Billboard. "Jamey and other teens who take their lives young because they feel different – I wanted to make [their deaths] a lesson instead of a casualty of our negligence."

In his op-ed, John discusses the work his foundation is doing to help end AIDS.

"Dozens and dozens of my close friends and many colleagues in the music industry became HIV positive," he wrote. "They suffered and died, and it was the most horrible feeling, losing loved ones and knowing there was nothing I could do to help."

"But I knew I had to help. I needed to do something."

"If we continue to harness passion and commitment – the energy of individuals, working tirelessly, doing whatever they can to make a difference – then I believe with all my heart that in my lifetime I will have seen the very first day, and also the very last day, of the AIDS epidemic," he added.